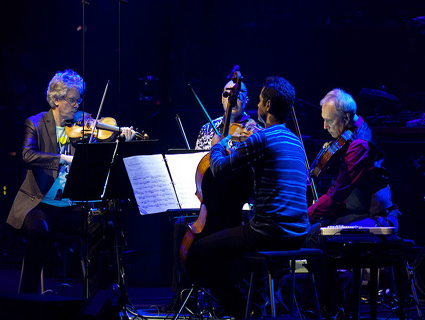 The Kronos Quartet recently played its first concert of 2013, a year that marks the group’s 40th anniversary, at the Napa Valley Opera House. The night’s program by this famously genre-stretching, culture-swapping string quartet pushed the boundaries of traditional and experimental music and so blew me away that I was compelled to reach out to founder David Harrington to chat about the group’s origins, cross-cultural mashups, and music as activism.

Mother Jones: With the work that you do, playing new music from some unheard composers and others that are constantly innovating, I’ve sort of come to think of Kronos Quartet as musical activists. What do you think about that?

David Harrington: I feel honored to be called an activist. It stems from the work that I want to do and the function of being a group in our time and in our culture. To me the two violins, a viola, and a cello create an almost infinitely moldable sound. As a force in society it can tackle all sorts of issues. The other night you heard music from Syria, India, Serbia, and a lot of places that you wouldn’t normally think of string quartet music necessarily coming from. I’ve spent my entire 39-plus years at Kronos trying to extend the reach of music and bring elements into the work that maybe hadn’t been considered before.

MJ: You founded Kronos in 1973 after hearing George Crumbs “Black Angels.” Why was that piece so influential?

DH: In addition to the amazing beauty of that piece, it’s also terrifying. Our country had just lost the war in Vietnam and I was a part of that generation of people that did not know what to do or how to express themselves. The amazing violence and the absurdity that the war brought into our lives, it was a very confusing time and I was trying to figure out what music made sense. On the radio one night came this piece and at first I didn’t even know what the instruments were, then later I found out it was for electric string quartet with all sorts of other sounds gongs and glasses—the sonic spectrum and the dramatic spectrum is absolutely amazing. And it felt like an answer to me. Life made sense for a moment and I had to play that piece.

“There have been over 800 pieces written for Kronos, so there’s lots to work with.”

DH: Well, you heard some of it the other night.

MJ: The program was such an eclectic mix. How do you sit down and decide to program Laurie Anderson with Wagner and Sigur Rós?

DH: There have been over 800 pieces written for Kronos, so there’s lots to work with, and one thing I delight in is trying things out. Will a concert work that starts off with Bryce Dessner, which is loud and driving, and then the next piece (Laurie Anderson) is as quiet as can be?

MJ: That contrast was my favorite part of the concert.

DH: Oh good. For me sonic contrast is one of the delights of life, I just love it! In terms of the various styles and bringing together elements which on the surface don’t seem to belong together such as Wagner and Syrian Wedding music. As you might now, Wagner was a notorious anti-Semite and my idea of humor is to be sure that when we play Wagner’s music, it is right next to a Jewish composer. The other night “Shim Shalom” was right before the prelude to “Tristan and Isolde.”

MJ: After almost 40 years with Kronos, what types of changes have you seen in musical landscape?

“The concerns and desires and fears and everything that is involved in being a human being: That is what I want in our music.”

DH: In 1973 every piece that we played the other night for a variety of reasons could not have been imagined. It has taken a lot of little breakthroughs. It’s a great time to be a musician and to be an audience member. Our concerts can project that celebration of life and creativity, even though sometimes the topics are incredibly serious, such as the piece I asked Aleksandra Vrebalov to write to give us a sense of what had happened in her country (Serbia) over the years. We have numerous long-term relationships with composers, and whether it’s Terry Riley or Philip Glass or John Adams or Nicole Livay, they are writing some of their best music right now. It’s really wonderful.

MJ: You sound very positive about the current musical landscape. Are there any changes you would like to see? Anything you’d like to accomplish?

DH: Our responsibility is to try to make meaningful sonic events that hopefully have as much of the texture of what it’s like to be alive right now—the various concerns and desires and fears and everything that is involved in being a human being. That is what I want in our music. I still always feel like we are just getting started.

MJ: You cover genres from all over the world, some with a very different idea of central pitch. What are the challenges or limitations in adapting them for a string quartet?

DH: With bowed stringed instruments, the pitch can be altered in so many ways. It’s really like every new piece is a new frontier. We are going to be playing these praise songs with some incredible musicians from Mali. They are sung right before a young woman gets married and tell of what lies ahead in her life, the words are sad and the music is beautiful. Everything about them, the tonality and texture—we are going to need to become different instrumentalists to play this music the way we want to. Those are the challenges I thrive on; as a musician it’s possible to actually take in another viewpoint, another culture, another approach to an instrument or sound, through which we become capable of listening to our own culture more carefully.

“What I hope is that a concert of ours will lead a person to a life of activism.”

MJ: Is cultural understanding another mission for the quartet?

DH: Yes. What I hope is that a concert of ours will lead a person to a life of activism. That can be wanting to be the greatest elementary school teacher you possibly could; it could be questioning the truth of what our political leaders are talking about; it could be using your ears to discern the truth in various ways. You can almost think of a concert as a type of a structure—I delight in establishing different types of structures—but each one a suggestion of how things might be able to work out. That’s our job, and I feel really fortunate to do the type of work in music that we do, but with that comes a sense of wanting to alert our audience of things that are happening.

For example, there is a Canadian composer who is writing a wonderful piece about the tar sands in northern Canada and one of the most disturbing environmental disasters. The composer is going to record the machines that are making this happen to the Earth. Another composer is writing a piece on the pine gap in Australia, a secret American surveilence outpost right in the sacred lands of the aboriginal people—billions of our tax dollars are going to this place and no one can really figure out what it’s about. I want Kronos to be involved with at least asking the question of what is going on.

MJ: What are you looking forward to this year?

DH: I want each note I play to be better than the last one. In spite of everything you read in the newspapers—global warming and fiscal cliffs—there are still some basically really good things that are happening and I want to celebrate those as well as point out some things that need fixing.