Read on for essential background on the escalating conflict or click here for the latest update. Previous updates are here:

Ever since the 47 percent dashed Mitt Romney’s White House dreams, GOPers have been trying to figure out what went wrong, and how to stop it from happening again. Texas Republican Sen. Ted Cruz suggests that Republicans stop reading the New York Times. Sen. Marco Rubio (R-Fl.) is seizing the opportunity to reform his party’s stance on immigration. But other GOPers are pitching a solution that will sound familiar to anyone who witnessed the 2010 GOP gerrymandering effort or the ensuing voter fraud wars: If you can’t win, change the rules—in this case, the rules of the Electoral College. Here’s what you need to know. 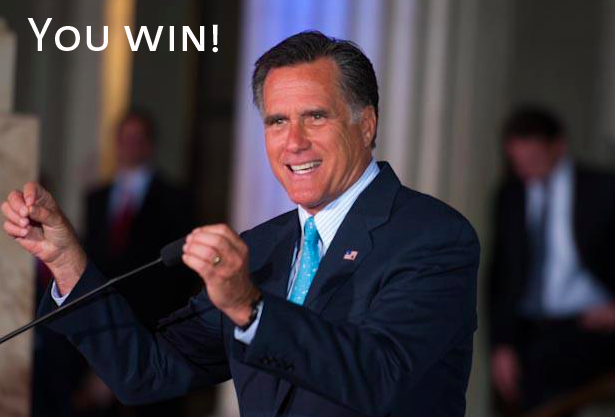 Okay, but how does the plan work? The GOP doesn’t have one “master plan” to rig the electoral college. Instead, lawmakers are considering a couple of different versions of a plan that would tie electoral votes to congressional districts. Ready to geek out? Okay. The plan would award one electoral vote to the winner of the popular vote in each congressional district. That would leave two leftover electoral votes, representing the state’s two senators, up for grabs. In Virginia’s plan, the two bonus votes would have been given to the candidate who won the most districts (that proposal was killed on Tuesday); in other versions of the proposal, two bonus votes would go to the winner of the statewide popular vote.

The only problem? Congressional districts aren’t created equal. In 2010, the GOP went on a massive gerrymandering spree that allowed Republicans to keep their House majority in 2012 even though more Americans voted for Democrats. Tying electoral votes to these gerrymandered districts would give the GOP a huge advantage in states that are expected to go blue on the presidential level. This could discount the votes of those Americans who live in urban areas, particularly minority groups. (Blogger Paul Bibeau found that the Virginia plan would make a Democrat vote worth 3/5 of a Republican one.)

This would give Republican presidential candidates a bunch more electoral votes without forcing them to win over any new voters. Six states—Florida, Michigan, Ohio, Virginia, Pennsylvania and Wisconsin—have considered the idea, but it’s so controversial that the proposals have lost steam in all but the last two states. “The people supporting this were hoping to do it without anyone noticing, and they thought it was too complicated for people to understand,” Ian Millhiser, a senior constitutional policy analyst at the Center for American Progress, notes.

If Maine and Nebraska already do it, what’s the problem? Sometimes, a presidential candidate wins the nationwide popular vote but loses the Electoral College. This has happened three times, most recently in 2000. Awarding electoral votes by congressional districts would make this much more likely to happen. That’s because it would allow for a candidate to win the majority of the electoral votes in a state without winning the popular vote in that state. A candidate could lose Pennsylvania overall, for example, by 200,000 votes, but still take 12 of its 20 electoral votes by winning 12 of its congressional districts. As Akhil Reed Amar, a constitutional law professor at Yale University, has explained, it’s currently impossible for a candidate to win the popular vote and lose the electoral vote in Maine or Nebraska because those states have such a small number of electoral votes to begin with. But larger states could give the candidate with fewer actual votes the majority of their electoral votes—an obviously undemocratic outcome.

Republicans are also not trying to apply their reform ideas in all states; they just want to change the rules in states where a rule change might help them. “A lot of states that have been consistently blue that are fully controlled red ought to be [looked] at,” Reince Priebus, the chairman of the Republican National Committee, told the Milwaukee Journal Sentinel on January 13. But there’s no reason for Republicans to try this in Texas, for example, because the state is expected to go red, and the GOP wants to win all of its electoral votes.

So is this happening in my state? Florida, Michigan, Ohio, Pennsylvania, Virginia and Wisconsin are all states that have voted for Obama twice but have Republican governors and Republican-controlled state legislatures. But according to Millhiser, the GOP is less inclined to target swing states, like Ohio, Florida, and Virginia, that could go red in 2016. In those cases, a change could end up hurting Republicans instead of helping them. Here are states where the GOP plan has run into trouble: 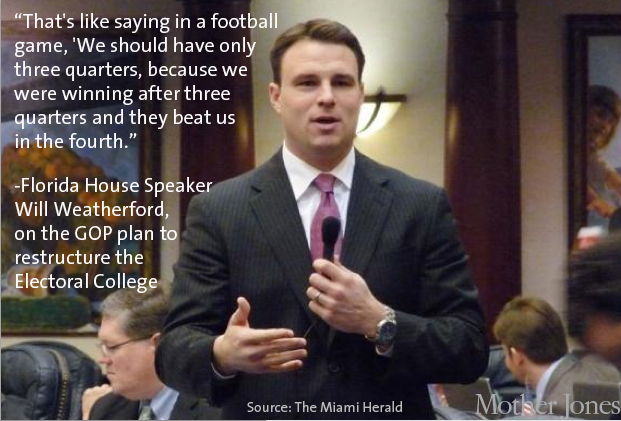 These are states where the plan hasn’t been shut down:

Molly Ball at The Atlantic also reports that a DC-based strategist and a former Ohio Republican secretary of state are raising money to spread the electoral-votes-by-district plan to every state, not just the ones that give Republicans an obvious advantage. The strategist, Jordan Gehrke, told Ball that “[t]he point of this is not to help or hurt Republicans. Competitive elections are a good thing.” Gehrke’s strategy hasn’t been popular with progressives:

What’s the justification for this plan? The GOP says some voters, especially in rural areas, aren’t having their voices heard. “I think if you want to continue to get people to be involved and turn out to vote for their candidate in the more rural areas, you’re going to have to even the playing field in order to have involvement,” Sen. Bill Carrico, who introduced the Virginia bill, told the Roanoke Times. And two Pennsylvania GOP representatives argued in a December 2012 memorandum that “the Congressional District Method will increase voter turnout and encourage candidates to campaign in all states rather than just those that are competitive.”

If the plan had been around in 2012, would it have changed the outcome of the election? Maybe. As Richard L. Hasen, a voting rights expert, notes in Slate, if that had been the case, “The Obama and Romney campaigns would have campaigned very differently in these states if they were under a district system, targeting not voters across the state, but voters in the key districts needed to win.” However, according to the Huffington Post, if every state had used the new Electoral College plan and candidates had campaigned exactly like they did, Romney would have won by at least 11 electoral votes. And even if electoral votes were awarded by congressional district in the six key states that have been targeted, Romney would have won an additional 64 electoral votes, giving him enough to win the election. Be sure to check out this interactive map by 270toWin, showing how alternatives to the Electoral College would have affected the 2012 election, by state. 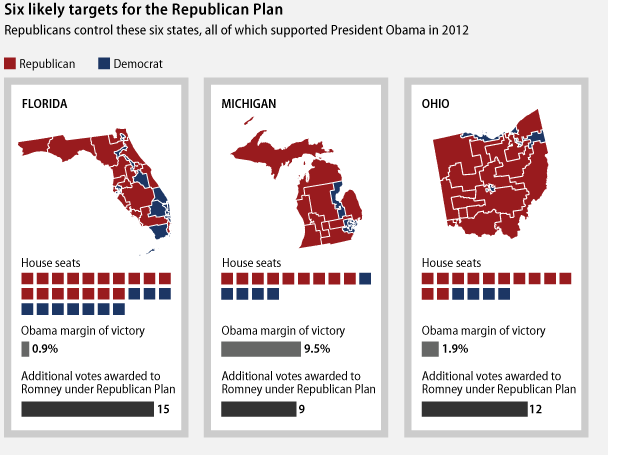 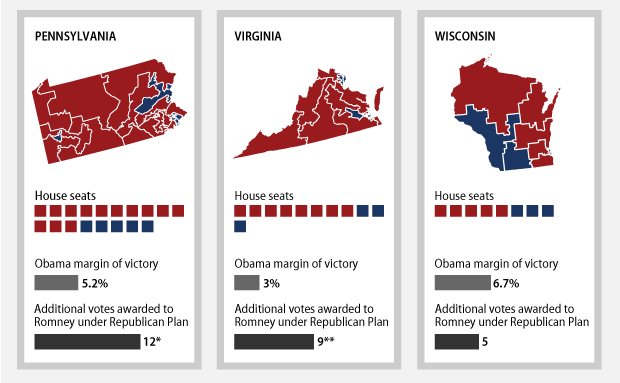 Has this been tried before? “This is one of those terrible ideas that losers bring up every now and again when they’re distraught they’ve lost an election,” Millhiser says. “Democrats aren’t angels.” In fact, Democrats proposed a similar ballot initiative in Colorado in 2004. If it had passed, it would have given then-presidential candidate John Kerry an edge over George W. Bush. GOPers opposed the initiative, and Republican political strategist Katy Atkinson led a group effort against the initiative called “Coloradoans Against a Really Stupid Idea.“

States splitting their electoral votes between multiple candidates was fairly common during America’s first few decades. By the end of the 19th century, however, tying electoral votes to districts had fallen out of favor as parties found that the winner-takes-all system was a more effective way to throw support behind a candidate. It’s not unconstitutional for states to use a district system—the Supreme Court allowed Michigan to do so in 1892—but as Lyle Denniston at the National Constitution Center notes, members of a political party could potentially sue if they feel a system “undermines their right to collectively make a political choice.” But as Amar explains, in the 21st century, a system where a candidate can lose the statewide popular vote and still win the majority of its electoral votes is something “completely new under the sun.” 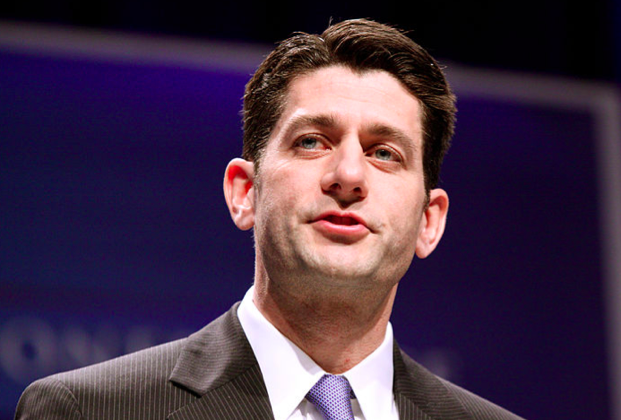 Former vice presidential candidate Paul Ryan tells the Wisconsin State Journal that he “always kind of liked the idea of being a targeted state,” addressing criticism that the electoral college overemphasizes voters in swing states. He says he would prefer Wisconsin to stick with the current electoral system, which could put a damper on any legislation moving forward in the state.

In the mean time, Pennsylvania Republicans are moving forward with legislation that would proportionally allocate most electoral votes by the popular vote (not by congressional district).