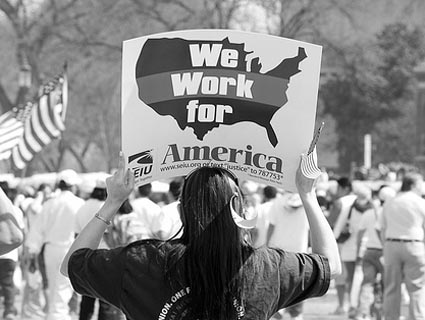 A protester at a 2010 immigration reform rally in Washington DC. <a href="http://www.flickr.com/photos/anksampedro/5651338894/sizes/m/in/photostream/" target="_blank">Flickr/anksampedro</a>

As President Barack Obama prepared to deliver his speech on immigration reform Tuesday, key points of tension were already emerging between what the White House wants and what the bipartisan Senate “Gang of Eight” proposed Monday. The most important difference between the two plans may be on the Southwest border commission, a panel of regional leaders described in the Senate plan, and whether or not it will have to assert that the border is secure before undocumented immigrants can begin acquiring citizenship.

Obama reportedly opposes the idea that border security conditions would have to be met before immigrants can seek citizenship. Even within the “Gang of Eight” itself, as the Washington Post‘s Greg Sargent reported Tuesday, it’s unclear what security conditions must be met and if the Southwest border commission would have the final say on when the citizenship process can begin.

If he’s serious about immigration enforcement, why does Obama oppose security conditions? Because for the past four years, the Obama administration has broken deportation records for four years running, deporting around 400,000 people a year for a total of about 1.5 million deportations since the president’s first day in office. (The administration says that 55 percent of these deported immigrants had been convicted of crimes. But the vast majority of those crimes were minor.) President George W. Bush deported 2 million undocumented immigrants over the course of eight years, and Obama has reached nearly that number in his first term. As far as the Southwest border is concerned, net migration from Mexico in 2012 was zero, according to the Pew Hispanic Center. The United States “allocates more funding for border enforcement than all of its other immigration enforcement and benefit programs combined,” according to the Migration Policy Institute.

In other words, it’s actually very difficult, given the record numbers of deportations and the massive amount of money already being spent on the border, to see what more can be done by enforcement alone to stop illegal immigration.

The problem is that Republicans don’t trust Obama to enforce the law, and they don’t believe the data that suggests he is already doing so. There are also those who simply won’t be satisfied until every unauthorized immigrant is purged or “self-deported” from American soil. A completely secure border is impossible outside of the realm of science fiction, but the Obama administration’s early efforts to win Republican trust by strictly enforcing immigration law didn’t work. All that money and all those deportations were supposed to to lay the ground for a comprehensive immigration reform bill. Instead, the administration’s efforts only led to louder shrieks of “amnesty.”