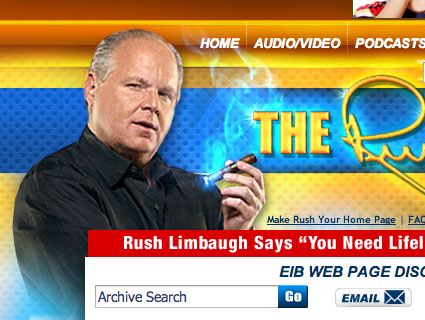 As if seeking to illustrate the GOP’s ongoing problem with alienating large groups of people, on Wednesday Rush Limbaugh purported to explain why this generation of Latino immigrants differs from previous ones: They’re lazy. Here’s a transcript:

[T]he way the Republicans are looking at it is that they think that Hispanic immigrants are made-to-order conservatives. For some reason, culturally, they think that they’re invested in hard work. And using the Cuban exile model, they’re exactly right. But the Hispanic demographic, if you will, or population, has shifted. And the Cuban exile model is no longer the dominant model. The Mexican immigrant model is. And that — they arrive with an entirely different view of America. And I’m sorry if this is offensive, but it’s true.

This isn’t the first time that Limbaugh has offered the thesis that people from Cuba work hard while people from Mexico are lazy. He put a slight twist on it last November, explaining that “[Cubans are] just not quite dark—as dark, and they’re oriented toward work.” So according to Limbaugh, Cubans are less brown then Mexicans, and less lazy, and because of this “Cubans are not all that popular” among other Latinos. When the Department of Homeland Security decided not to deport some undocumented immigrants brought to the US as kids, however, Limbaugh complained that Obama was “flooding the job market” with “illegals.” In short, something must be done to stop these lazy Mexicans from taking American jobs. (Left unmentioned by Limbaugh was the substantial difference between Cubans and Mexicans that is actually relevant to the discussion about immigration: Cubans can seek American citizenship simply by setting foot on American soil. Unauthorized immigrants from other nations cannot.)

Limbaugh’s contradictory view that undocumented immigrants are lazy but will also outcompete American workers for jobs is relatively widespread on the right. “Take away the Spanish surname and Latino voters look a great deal like many other Democratic constituencies,” National Review explained in an editorial opposing immigration reform published Wednesday. “Low-income households headed by single mothers and dependent upon some form of welfare are not looking for an excuse to join forces with Paul Ryan and Pat Toomey.” The editorial goes on to complain about the lack of effective measures to prevent undocumented immigrants from working.

What we’re seeing here is a product of ideological tribalism run amok. Some conservatives have persuaded themselves that being a conservative is a prerequisite for human virtues like diligence. Since only conservatives know what hard work is, if you are not conservative you do not work hard. Because Cuban-Americans typically vote Republican, they must understand hard work and responsibility. Since Mexican-Americans, like most other Latino subgroups, vote Democratic, they are lazy by definition. Given these sorts of blanket generalizations, it’s easy to see how the right-wing prophecy that legalizing undocumented immigrants will simply lead to more Democratic voters could become self-fulfilling.