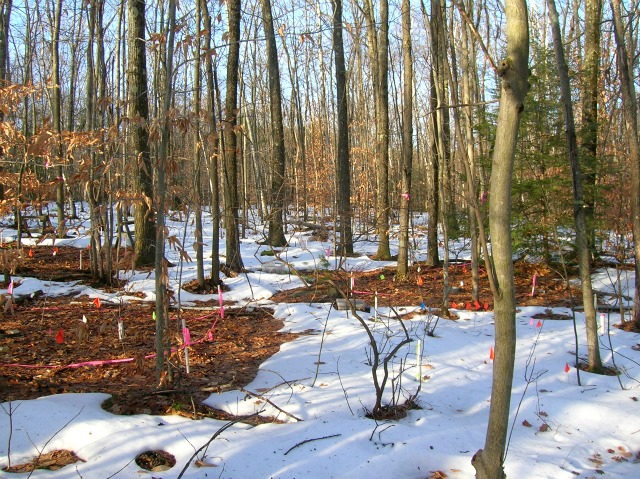 Study plots at the Harvard Forest Long-Term Ecological Research site in Massachusetts where researchers have been warming two areas with underground cables to simulate a warmer climate. The photo shows a January thaw on a 50°F day. The heated plots melted before the unheated ones: Alix Contosa, postdoctoral researcher at University of New Hampshire

Warmer temperatures from a warming climate force the release of carbon dioxide from soils into the atmosphere, driving even more climate warming. That’s the bad news. The good news is that the effect diminishes over time—over 18 years, and counting. This according to a new paper just published in Nature Climate Change.

We know that microorganisms in the soil release 10 times the CO2 that humans release on a yearly basis. These soil processes are normally kept in check by plants, which uptake C02 from the atmosphere. But a warming climate is driving changes in the carbon cycle. 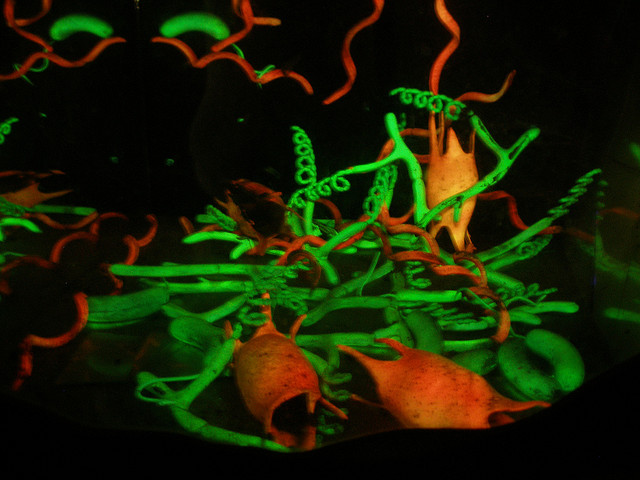 To examine how that might be unfolding on at least one patch of our planet—the Harvard Forest Long-Term Ecological Research site in Massachusetts—the researchers warmed two plots with underground cables, one plot for two years, the other for 18. They then measured the efficiency of soil organisms in utilizing food sources that come from plants. Here’s some of what they found:

“When the soil was heated to simulate climate warming, we saw a change in the [soil] community to be more efficient in the longer term,” says Frey.

Why the change? The authors hypothesize that long-term warming may change the community of soil microorganisms to become more efficient. Perhaps the composition of the species changes, or the original species adapt, or the availability of various nutrients changes, or some or all of the above.

“While they’re low on the charisma scale soil,” says lead author Serita Frey, at the University of New Hampshire, “[soil] microorganisms are so critically important to the carbon balance of the atmosphere.”

These findings could lead to critical changes in the way the carbon cycle is predicted, since common ecosystem models don’t factor in the temperature response of the microbial community. “There is clearly a need for new models that incorporate an efficiency parameter that is allowed to fluctuate in response to temperature and other environmental variables,” says co-author Johan Six, at the University of California, Davis.

In the video, author Serita Frey describes her long-term work with soil.