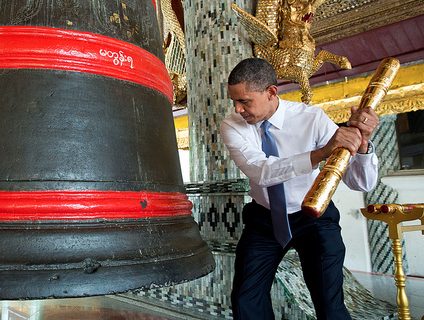 Remember that scene in Mean Girls where Regina George, the blonde queen bee, tells a classmate, “I love your skirt, where did you get it?” but then says, “That is the ugliest f-ing skirt I’ve ever seen,” behind the other teen’s back? President Barack Obama might have just pulled a similar stunt with the whistleblower community.

Obama signed a new law expanding whistleblower protections for some government employees in November, and on January 2, he signed the 2013 National Defense Authorization Act, which extends similar protections to defense contractors who expose waste and corruption. But the NDAA signing came with a caveat that blindsided the bill’s backers and has some in the whistleblower community up in arms: In a signing statement, Obama wrote that the bill’s whistleblowing protections “could be interpreted in a manner that would interfere with my authority to manage and direct executive branch officials,” and he promised to ignore them if they conflicted with his power to “supervise, control, and correct employees’ communications with the Congress in cases where such communications would be unlawful or would reveal information that is properly privileged or otherwise confidential.”

“12 million contractors are going to be out in the cold because of this,” warns Jesselyn Radack, the national security and human rights director for the Government Accountability Project and a former whistleblower. “Asking employees to go to their boss before going to Congress defeats the purpose of blowing the whistle.” Radack adds that presidents “use signing statements to direct their subordinates on how to interpret and administer a law, and it can have substantial legal impact.” She points to George W. Bush’s signing statements on torture and the USA PATRIOT Act as examples, both of which allowed the former president to dodge parts of those laws.

“The language Obama used wasn’t defined, it’s completely ambiguous, and it’s already led to confusion,” says Angela Canterbury, director of public policy at the Project on Government Oversight. “I can imagine contractors claiming that disclosures made by whistleblowers are ‘confidential,’ and I think it could likely have a chilling effect.”

Peter Van Buren, a former foreign service officer who wrote a book exposing contracting waste in Iraq (and was hassled by the State Department as a result) tells Mother Jones the signing statement “is merely another expression of [the Obama] administration’s hostile policy toward all whistleblowers…It disappoints me, and devalues my own efforts to bring transparency to the government.”

Obama didn’t alert either Sen. Claire McCaskill (D-Mo.), who backed the protections, nor Rep. Jackie Speier (D-Calif.), one of the bill’s sponsors, that the signing statement was coming, according to reports in the Huffington Post and the Washington Post. In a press release, Speier called Obama’s signing statement “deeply disturbing,” and warned it could potentially undo the language meant to protect contractor whistleblowers.

Obama has been accused of treating lawful whistleblowers like illegal leakers. His administration has wielded the World War I-era Espionage Act against more federal workers than all other presidents combined. Targets of Obama’s crackdown have ranged from Thomas Drake, a former senior executive at the National Security Administration who helped expose hundreds of millions of dollars in waste on a government contract, and John Kiriakou, a former CIA agent who spoke out publicly about waterboarding and is facing prison time.

Other whistleblowers and whistleblower advocates are more optimistic—they’re unhappy with the signing statement, but say they’re glad they got new legal protections. “Obama’s signing statement was rhetorical fluff,” argues Tom Devine, the legal director of the Government Accountability Project (GAP). “Obama made no reference to restricting the law, or any type of enforcement against whistleblowers.”

“It seems he is saying exactly what a good politician and president should say,” argues Kathryn Bolkovac, who exposed human trafficking in Bosnia while serving on the UN Police Task Force (and inspired the movie The Whistleblower). “I am sure it will at times limit his authority, as it should when a conflict of interest may arise regarding executive officials who could potentially be involved, but I see that as a positive.”

The new law could help whistleblowers like Bolkovac, who was fired for her disclosures, by creating safe channels for police officers stationed in United Nations peacekeeping areas who report on illegal activity. (Bolkvoac does acknowledge, however, that “private corporations like the one who employed me still have ways of intimidating their employees.”) According to GAP, the law will affect about 12 million contractors and will work to protect the $1.9 trillion spent every year on outsourcing. Nonfederal workers can already file lawsuits on behalf of the government, but this law would permanently extend protections to all employees of defense contractors and subcontractors (and temporarily for other contractors, as part of a pilot program).
One thing the law doesn’t do, however, is extend those same rights to contractors in the intelligence community, an exclusion that Devine calls “inexcusable.”
Radack says that the continued exclusion of the intelligence community from whistleblower protections, in addition to the president’s signing statement, demonstrates that “Obama is still giving whistleblowers baby pats on the head while screwing us on the other side.”

But Canterbury says it’s still “not definitively clear” yet what the impact of Obama’s signing statement will be. “It’s going to be incredibly important for Congress to conduct rigorous oversight to ensure the law is not weakened,” she says.