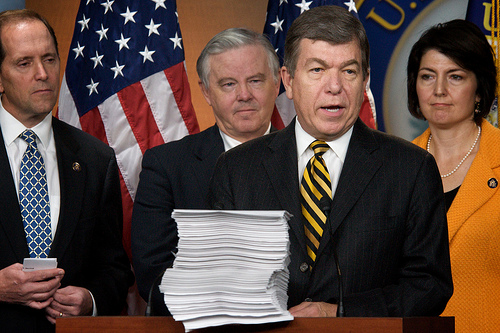 Fuming over a fiscal cliff deal devoid of big spending cuts, the Republican Party is cranking up the crazy talk by pledging anew to hold America hostage in the brewing fight over raising the nation’s debt ceiling.

Politico quotes GOP leaders in Congress as saying that “more than half” of Republicans in Congress are willing to let America default “unless Obama agrees to dramatic cuts he has repeatedly said he opposes.” Still more Republicans are itching to shut down the federal government, a la Clinton and Gingrich in 1995-96, unless the president bows to their demands: Deep spending cuts to domestic programs, Medicare, Medicaid, and Social Security, but none to military spending.

What’s most jarring about the GOP’s willingness to default or grind the government to a halt is how brazenly political the party’s reasons are for doing it, per Politico:

House Speaker John Boehner “may need a shutdown just to get it out of [House Republicans’] system,” said a top GOP leadership adviser. “We might need to do that for member-management purposes—so they have an endgame and can show their constituents they’re fighting.”

A default—or even a down-to-the-wire debt ceiling drama (see: 2011) that ends with a deal—has real economic consequences for working Americans. It could jack up interest rates on student loans, car loans, home loans, and credit card debt. It would increase borrowing costs for the government itself. And Federal Reserve Chairman Ben Bernanke has said that a default could torpedo the US economy’s slow yet steady recovery.

But in the minds of Congressional Republicans, those facts don’t appear to outweigh the need to rebuke Obama. Nor does House Speaker John Boehner’s desire to avoid a government default, according to Politico:

Boehner assumes he can ultimately talk members out of default, but he is so wounded and weakened from last month’s tax-hike battle that the speaker might very well be wrong. Obama assumes Republicans would never be so foolish as to put the economy at risk to win a spending fight. Conservatives say he’s definitely wrong on that score. They say he’s the foolish and reckless one for piling up $6 trillion in debt on his watch.

“For too long, the pitch was, we’ll deal with it next time,” said Rep. Jason Chaffetz (R-Utah). He said GOP lawmakers are prepared to shut things down or even default if Obama doesn’t bend on spending. “No one wants to default, but we are not going to continue to give the president a limitless credit card.”