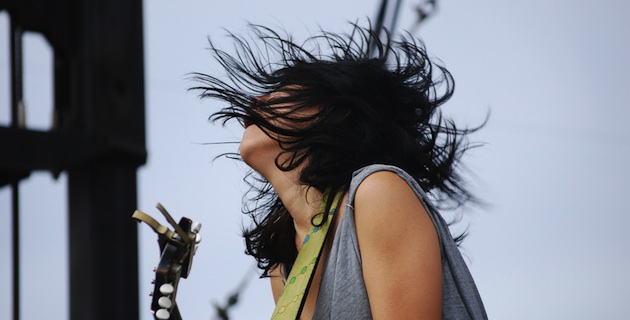 Small discovery music festivals are different from the major money-makers, and for that, lord bless ’em. Like New York’s College Music Journal marathon, or CMJ, which floods lower Manhattan with hundreds of bands every fall, the Bay Area’s Noise Pop offers an action-packed week, a paralysis of choice, and the possibility of stumbling upon the unknown band that happens to blow up in 2013.

Typically, this might mean that there are plenty of duds amid the treasures, but I have to say that the 2013 assembly looks exquisite. Maybe it’s a testament to the Bay Area’s fertile music scene, or a renewed manifest destiny that’s pulled talent to the spot, but the seven bands below—from the snarling guitars of the Bay Area garage scene to Thao Nguyen’s inimitable vocals—represent just a slice of what’s out there.  If it helps ease the pain of choosing where to use your festival badge, here are my picks, which are by no means comprehensive, and of course, totally subjective.

Body/Head
Tuesday, 2/26 @The Rickshaw Stop
It still feels a little raw to discuss Kim Gordon’s new project, Body/Head, with Sonic Youth on an indefinite break. But all three members of the band have kept busy—Lee Ranaldo released a solo album in 2012; Thurston Moore is set to tour in March with his new outfit, Chelsea Light Moving; and last year, Gordon started playing shows with free-noise guitarist Bill Nace as Body/Head. Nace and Gordon’s performances flower from on-stage improvisation, and from what few clips are available online, they promise to deliver something heavy and ferocious, tapping into Gordon’s idolized experimental aesthetic.

The Mallard
Thursday, 2/28 @The Great American Music Hall
There’s something wholly bewitching about The Mallard’s lead singer Greer McGettrick, between her rude, twangy guitar rhythms and her drawling assault on the microphone. McGettrick spent five years working the Fresno music scene before coming to San Francisco, where Thee Oh Sees’ John Dwyer encouraged her to put out an album on his label Castle Face Records. That was last year’s fuzzy and addictive Yes On Blood, and this year, the band is set to put out a “weirder” and “darker” followup. This might very well be the season that The Mallard comes into its own, though the band’s shows are plenty dark and deliciously weird as is. (The Mallard will also be playing this show with Tehran’s The Yellow Dogs, who deserve an honorable mention: Before moving to the States in 2010, they played underground—literally—risking imprisonment for pursuing a musical genre banned by the theocracy as too Western.)

OBN IIIs/FUZZ, Blasted Canyons
Thursday, 2/28 @The Knockout
There were too many bands I wanted to write about that were playing this particular show, so forgive the abridged descriptions of each: Austin’s OBN IIIs are co-headlining, having put out an irrepressibly catchy punk rock album on Matador last year. They’re sharing top spot with Fuzz, the latest music project from the Bay Area’s Ty Segall, who takes on vocal duties from behind a drum set. (Don’t worry—Segall’s just as raucous with sticks as he is with a guitar.) Also representing the Bay Area are Blasted Canyons, instrument-swapping ambassadors of noisy punk, featuring Wax Idols‘ fierce Heather Fedewa. All three bands are very much worth seeing on their own, but together, Thursday night at the Knockout makes for one stellar lineup.

Rogue Wave
Friday, 3/1, @Bottom of the Hill
Whatever happened to Rogue Wave? The Oakland band’s discography is loaded with expertly crafted indie rock classics, but their history has been plagued by tragic hiatuses over the past decade. With members weathering slipped discs, a kidney transplant, and an apartment fire resulting in the death of former bassist Evan Farrell, the band took another year-and-a-half break after the release of 2010’s Permalight. This year, Rogue Wave will make an “intimate” appearance at Noise Pop, and then perform at Napa Valley’s Bottle Rock music festival in May. It’s a rare opportunity to catch them live, and an even better one to revisit and get lost in albums like Out of the Shadow and Descended Like Vultures beforehand.

Thao & The Get Down Stay Down
Saturday, 3/2 @The Great American Music Hall
There’s no real substitute for the sting and shape of Thao Nguyen’s voice, her keen, imaginative lyrics, and the deceptively simple “pop” hooks embedded in the colorful, rough-around-the-edges compositions for which she’s known. Earlier this month, the San Francisco songwriter and her band, The Get Down Stay Down, put out We the Common, an album inspired in part by Nguyen’s work with a women prisoner’s advocacy program, and maybe Nguyen’s most ambitious yet. Noise Pop is one of Nguyen’s few California shows before she tours the country in March and April, and I intend to make the most of it.