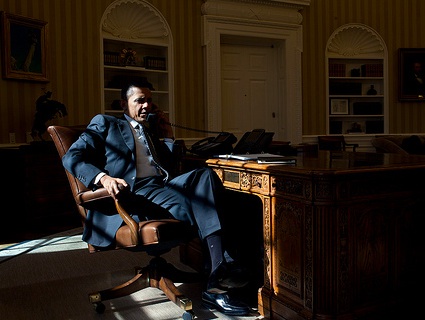 The Obama administration announced Wednesday night it will disclose classified Department of Justice documents explaining the legal justification for the killing of American terror suspects abroad to members of the House and Senate intelligence committees. The decision came in advance of hearings scheduled for Thursday in which the Senate intelligence committee was set to consider the nomination of John Brennan, the White House counterterrorism adviser, to head the Central Intelligence Agency. A bipartisan group of senators and representatives led by Sen. Ron Wyden (D-Ore.) had spent months pressuring the administration to disclose the contents of the memos before the hearings. But while certain members of Congress will get to see the memos, the documents will not be made public.

Until Wednesday, the members of Congress charged with overseeing United States intelligence community had never actually seen the legal justification for lethal operations that have been taking place over the course of the last four years. Although members of Congress have occasionally made moves toward forcing the administration to disclose that legal rationale, they have always backed down.

Now civil liberties groups want to know why it’s only a few members of Congress, and not the public, who are allowed to see the documents governing how and when Americans can be killed by their own government.

“The United States is not a nation of secret laws, and a memo authorizing the killing of American citizens is too important to keep from the American people,” the American Civil Liberties Union’s Christopher Anders said in a press release Wednesday evening. “Everyone—not just select members of Congress—has a right to know when the government believes it can kill American citizens.”

This isn’t the first time the Obama administration has faced calls for disclosure of controversial Justice Department legal opinions laying out an expansive view of presidential power. Early in his presidency, Obama made the decision to disclose the George W. Bush administration’s internal legal opinions justifying the use of torture against terror suspects. The right howled that Obama was compromising national security, but the president defended his decision in an April 2009 speech to the CIA at the agency’s headquarters in Langley, Virginia. Then, as now, the administration was being sued by civil liberties groups to force disclosure of the documents. Here is an excerpt from that speech:

As I made clear, in releasing the [Justice Department Office of Legal Counsel] memos as a consequence of a court case that was pending and to which it was very difficult for us to mount an effective legal defense. I acted primarily because of the exceptional circumstances that surrounded these memos, particularly the fact that so much of the information was public—had been publicly acknowledged. The covert nature of the information had been compromised…What makes the United States special, and what makes you special, is precisely the fact that we are willing to uphold our values and ideals even when it’s hard—not just when it’s easy; even when we are afraid and under threat—not just when it’s expedient to do so. That’s what makes us different.

The Obama administration, which was losing court fights over the torture memos, has so far succeeded in preventing the courts from compelling the release of the targeted-killing memos. But everything else Obama said about the torture memos—that there are exceptional circumstances (in this case, the deaths of American terror suspects), for example, or that the program is essentially public knowledge—also applies to his targeted-killing memos.

If releasing the torture memos to the public was justified, it’s very hard to understand why Americans should be kept in the dark about the details of when, how and why their own government can mark them for death. As Wyden said on MSNBC Thursday morning, “Every American has the right to know when their government believes it’s allowed to kill them. I don’t think that, as one person said, is too much to ask.”