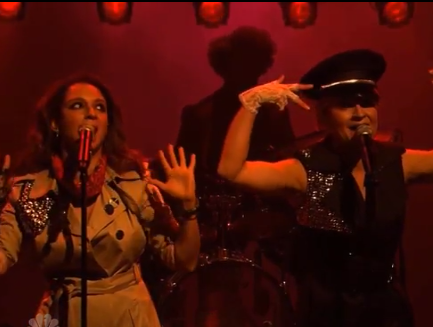 The enigmatic artist formerly and currently known as Prince is almost too easy to parody. Saturday Night Live played the joke for years in a recurring sketch that paired a whispering and mysteriously teleporting Prince with Maya Rudolph’s divalicious Beyoncé. (Remember the 2004 Grammys?) But last Saturday night, Rudolph and Prince reunited on stage in San Francisco—well, sort of. The Artist himself wasn’t present, but Rudolph and musician Gretchen Lieberum paid spirited tribute to him with their cover band, Princess.

If you’ve seen Rudolph as Beyoncé—or J. Lo or Whitney Houston or any other diva she’s impersonated—you’ll know there’s no question the woman can sing. And she’s mad funny. But Princess isn’t playing just for laughs; it’s an honest-to-god tribute to a musician Rudolph and Lieberum have adored for years. The pair hatched the idea for Princess in college, but the band didn’t made its TV debut until last September, when they played Late Night with Jimmy Fallon.

“I’m wearing my sensible shoes!” Rudolph announced at the beginning of Saturday’s show. That was a good decision, because Princess  proceeded to kick and writhe through classics from the funky “Controversy” to the sensual “Darling Nikki” (including the backwards vocals). They closed out the night, of course, with a much-demanded encore of “Purple Rain.” Rudolph and Lieberum adopted Prince’s lusty dance moves and sported glittery patches on their right shoulders as homage to Prince’s costume in his most famous album.

Rudolph honed her impersonation chops at SNL, but Princess isn’t about spoofing Prince’s mannerisms. (Leave that to Fred Armisen.) Like all tribute bands from Hayseed Dixie to Mandonna, Princess walks the line between being the inherently ridiculous conceit of mooching off someone else’s fame and earnestly paying tribute to the original music. Rudolph and Lieberum manage that balance, but the performance itself was less funny than the simple idea of two women covering Prince.

Princess’ take on Prince’s music is, no surprise, pretty darn good. A particularly enthusiastic couple nearly torpedoed us off the dance floor in Yoshi’s, a music club attached to a fancy Japanese restaurant that has surely seen quieter nights.

Princess was appearing as part of SF Sketchfest, an annual two-week comedy festival now in its twelfth year. From humble origins—?the original festival featured six homegrown acts—Sketchfest has becomea gathering of comedy’s glitteriest stars. It now encompasses events from live tapings of popular podcasts to cast reunions of dearly departed TV shows like Starz’ Party Down. Are we having fun yet? We’d say so.