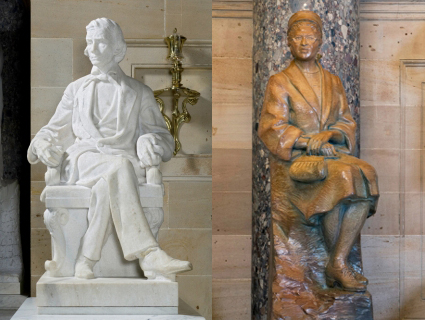 Former Confederate Vice President Alexander Stephens and civil rights icon Rosa Parks are both represented in Statuary Hall. <a href="http://www.aoc.gov/capitol-hill/national-statuary-hall-collection/alexander-hamilton-stephens">Architect of the Capitol</a>; <a href="http://www.flickr.com/photos/uscapitol/8512482669/sizes/z/in/photostream/">Architect of the Capitol</a>/Flickr

On Wednesday, congressional leaders unveiled a new statue of civil rights icon Rosa Parks at the Capitol’s Statuary Hall. Parks is the first African American woman to be represented in the room, which is a fairly understandable consequence of the fact that, for most of the nation’s history, only white dudes were allowed to participate in politics. Notwithstanding the near-total sausage fest, Parks is in some good company—Helen Keller is there; so is Dwight D. Eisenhower.

She’s also in some really bad company. Jefferson Davis, the president of the Confederate States of America, is there. So is Alexander Stephens, the man Davis tapped as second-in-command of the Confederacy. Here’s how the office of the Architect of the Capitol, which oversees Statuary Hall (and every other statue-related corridor of the Capitol), describes Stephens’ life’s work:

Always in frail health, Stephens was nonetheless a dedicated statesman, an effective leader, and a powerful orator, always seeking moderation and peace. Abraham Lincoln, serving in Congress with Stephens, admired and befriended him; John Quincy Adams wrote a poem in his honor. Although opposed to secession and differing with Jefferson Davis over states rights and nullification, Stephens served as the Confederacy’s vice president.

Stephens was so adamantly anti-secession that he only agreed to support the principle when he was asked politely.

He was also, the bio noted, “a powerful orator.”

No kidding. Stephens is most famous for a speech he delivered in Savannah, Georgia, in 1861, shortly after agreeing to help the Southern states wage an armed conflict in defense of keeping black people enslaved in perpetuity. It was called the “Cornerstone Speech,” on account of its simple premise—that the single foundational principle behind the Confederacy was the belief that not all men are created equal:

Our new government is founded upon exactly the opposite idea; its foundations are laid, its cornerstone rests, upon the great truth that the negro is not equal to the white man; that slavery subordination to the superior race is his natural and normal condition. This, our new government, is the first, in the history of the world, based upon this great physical, philosophical, and moral truth. This truth has been slow in the process of its development, like all other truths in the various departments of science. It has been so even amongst us. Many who hear me, perhaps, can recollect well, that this truth was not generally admitted, even within their day. The errors of the past generation still clung to many as late as twenty years ago. Those at the North, who still cling to these errors, with a zeal above knowledge, we justly denominate fanatics. All fanaticism springs from an aberration of the mind from a defect in reasoning. It is a species of insanity.

Alexander Stephens was a terrible person who aided and abetted an armed rebellion in the name of white supremacy that left—conservative estimate, here—600,000 people dead. That he was, as the bio helpfully notes, “orphaned and penniless at age 15” simply demeans the good name of destitute teenage orphans. All of which raises the question of why there’s still a statue of him in Statuary Hall—and why his official bio whitewashes his singular legacy.

It’s no small irony that Parks joins Stephens as one of six Statuary Hall honorees who are sitting down. Maybe he could’ve given up his seat.