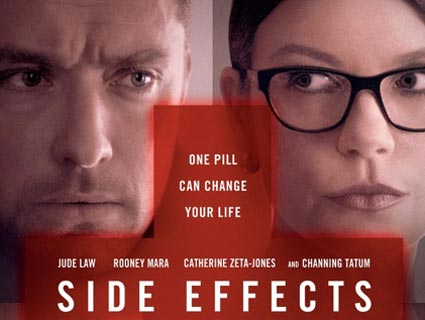 If you walk into “Side Effects” looking for a gritty, realistic treatment of what it’s like to go on and off of psychiatric meds, you’re walking into the wrong theater. If you come looking for a critique of Big Pharma’s marketing practices, you’ll leave perplexed. But if you see “Side Effects” to get lost in Jude Law’s baby blue “trust-me” eyes and to indulge in Catherine Zeta-Jones’ skillful portrayal of a hyper-sexual psychiatrist in silky business casual, you’re definitely in the right place. Indeed, the film makes it easy enough to OD on psycho-thriller kitsch.

Steven Soderbergh’s latest (and possibly last) film in fact begins with a keen picture of deep-seated modern malaise. Emily Taylor, played by Rooney Mara, is a graphic designer in her late 20s—an artist with dreams deferred by her marriage to Martin (Channing Tatum), who’s just been let out of prison after serving time for insider trading. Emily finds herself overcome by crushing depression upon reuniting with Martin in the real world, and after a suicide attempt she finds herself in the care of Dr. Jonathan Banks (Jude Law), a warm, sentimental psychiatrist who consults Emily’s former shrink, played by Catherine Zeta-Jones, about treatment. Eventually, as recommended by Zeta-Jones’ character, Dr. Banks prescribes his patient Ablixa, a fictional SSRI with some very disturbing side effects. Or that’s what viewers are led to believe, until the second half of the film gets sucked into a senseless plot wormhole and implodes.

There’s not much more I can say about the story without revealing some “Crying Game”-grade spoilers. Effectively, though, the film accomplishes two things: It plays to the fears, stigmas, and ethical quandaries that arise with the prescription of uncertain psychiatric medications, then absolves itself of exploring whether any of them are founded.

The prime example of this failure deals with how psychiatric drugs are regulated. In one scene, Law’s Dr. Banks discovers a study done about the side effects of Ablixa, of which he had not been aware before prescribing. Later, he finds out through a TV talk show that other psych meds have had serious side effects that weren’t properly disclosed to docs and patients. The film even cites the real-life example of Paxil and its marketers obscuring the fact that the medication increased the risk of suicide in young people, which led to the FDA requiring a “black box” warning on the drug and other antidepressants in 2004.

But that’s about where the discussion ends. It’s a shame, because regulation of pharma seems as pertinent as ever: In December, a New York federal appeals court overturned a drug rep’s conviction for marketing unapproved, off-label uses for Xyrem, a narcolepsy medication, justifying the drug rep’s actions as free speech. As journalist Mina Kimes highlighted in a story explaining the decision, this means that pharmaceutical companies may care less about putting their products through rigorous—and costly—clinical trials.

According to Dr. Rona Hu, the medical director of Stanford Hospital’s acute psychiatric inpatient program, the film presents another conundrum: Its myopic focus on ostensibly scary meds (mostly lost in the train wreck that is the film’s second half) could potentially deter some people from seeking treatment for psychological problems. “I treat patients, and they come in with very serious symptoms,” Hu told me. “It’s often very difficult to get them to seek treatment or acknowledge the severity of the symptoms.”

Ultimately, the most painful side effect of “Side Effects” is that it treats the personal and societal implications of psychiatric medications as beside the point. Its true concern, apparently, is about the greed and materialism that motivate nearly all of its characters, including the “good” guys. This is the one constant in the film—and makes for a highly effective downer, without a doubt.