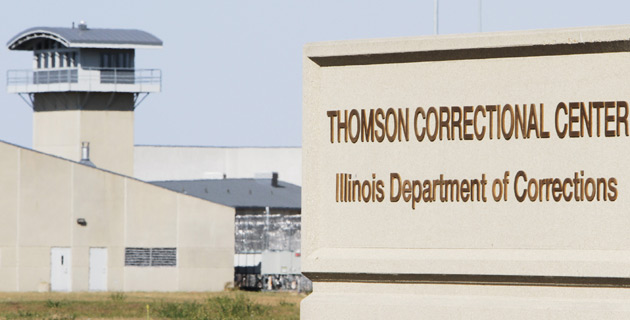 Even as it announces a review and reduction of its solitary confinement practices, the US Bureau of Prisons has confirmed that a newly acquired prison in Illinois will hold federal prisoners in supermax conditions. “Thomson will be a high security prison holding inmates with various security needs, including SMU and ADX type inmates,” BOP spokesperson Chris Burke said via email.

Thomson is the unused prison that the federal government recently bought from the state of Illinois. ADX, the notorious federal supermax in Florence, Colorado, holds its prisoners in 23-hour-a-day isolation with virtually no human contact. Federal SMUs, or Special Management Units, such as those found in Lewisburg Penitentiary in Pennsylvania, hold their prisoners in near round-the-clock lockdown in two-person cells. Both are forms of long-term isolation, and both have been denounced by human rights and prisoners rights groups as an inhumane and ineffective form of punishment, sometimes amounting to torture.

The revelation of the BOP’s plans comes on the heels of an announcement that the bureau has agreed to undergo a “comprehensive and independent assessment of its use of solitary confinement in the nation’s federal prisons.” The assessment, to be conducted by the National Institute of Corrections (an agency of the BOP), will reportedly be oriented toward reducing the population of “segregated” prisoners.

In recent months, according to last Monday’s announcement, the BOP has already “reduced its segregated population by nearly 25 percent. In addition, it has closed two of its Special Management Units, a form of segregated housing, due to the reduction in the segregated population.” Prior to this announcement, the BOP held more than 11,000 prisoners in some form of isolated confinement. Thomson is built to house 1,600.

“The reduction in our special housing unit population does not lessen the need for these beds.”

When asked why the BOP needed to build new supermax cells, spokesman Burke replied: “The reduction in our special housing unit population does not lessen the need for these beds. The Bureau of Prisons has not constructed any new ADX type units since 1994, when our population was only 85,000 (our current population is approximately 218,000).”

He went on to say that the SMUs were where prisoners are housed temporarily for misconduct “or as a result of circumstances that warrant their separation from the general population.” The distinction suggests that Thomson will be used for the type of long-term, sometimes indefinite segregation for which ADX is notorious—and which is also common in SMUs—the most extreme forms of isolated confinement.

The lucrative sale of Thomson to the feds was engineered largely by Democratic Illinois Sen. Dick Durbin. The prison, in the northwestern part of the state, was built by the state in 2001 but closed in 2010*. The Obama administration initially showed interest in Thomson as a possible stateside home for Guantanamo detainees. It was quickly dubbed “Gitmo North.”

For years, the sale was blocked by Congressional Republicans, even after the president promised that it would be used only for overflow from existing federal prisons, and not for Gitmo detainees. But last fall, the administration made an end run around the GOP-run House Appropriations Committee and bought Thomson by presidential directive. “Finally, the Department of Justice this afternoon is going to present the $165 million check…for the transfer,” Durbin said in October, “At this point, the president had to intervene and do this directly. I hope people understand he’s doing it for his state.”

Ironically, Durbin, the Senate’s Assistant Majority Leader, is widely credited with drawing attention to the issue of solitary confinement and pressing for national reform. In June, he chaired the first-ever congressional hearing on the practice. A press release from his office last week reads: “In his hearing last year, Durbin emphasized the importance of reforming the way we treat the incarcerated and the use of solitary confinement in prisons and detention centers around the country. Following that hearing, Durbin has twice met with Bureau of Prisons Director Samuels to push for additional reforms and encourage a sufficiently robust assessment of the Bureau’s segregation practices.”

“Many prisoners at ADX interminably wail, scream, and bang on the walls of their cells.”

When asked about the planned supermax cells at Thomson, Durbin spokesman Max Gleischman responded: “As the first member of Congress ever to hold a hearing on solitary confinement, Sen. Durbin is committed to reforming America’s segregation policies and practices…One important step in solitary confinement reform, and prison reform generally, is to reduce high rates of overcrowding. The BOP’s acquisition of Thomson prison will greatly reduce this overcrowding crisis and Sen. Durbin will work with BOP to ensure that all of its inmates are treated fairly and humanely.”

Recent federal lawsuits provide a window on conditions inside ADX and the federal SMUs. Suits filed on behalf of prisoners the all-SMU Lewisburg facility allege that prison officials deliberately pair people with their enemies and lock them down for 23 to 24 hours a day, and that this practice has led to at least two deaths. It also claims that prisoners have been strapped to their bunks with four-point restraints if they resist cell assignments.

A complaint filed last June on behalf of ADX prisoners alleges that the supermax’s torturous long-term isolation has produced a variety of psychotic and self-destructive behaviors:

Many prisoners at ADX interminably wail, scream, and bang on the walls of their cells. Some mutilate their bodies with razors, shards of glass, sharpened chicken bones, writing utensils, and whatever other objects they can obtain. A number swallow razor blades, nail clippers, parts of radios and televisions, broken glass, and other dangerous objects. Others carry on delusional conversations with voices they hear in their heads, oblivious to reality and to the danger that such behavior might pose to themselves and anyone who interacts with them. Still others spread feces and other human waste and body fluids throughout their cells, throw it at the correctional staff and otherwise create health hazards at ADX. Suicide attempts are common; many have been successful.

A final irony comes in the fact that after a long battle by advocates and community members, Illinois Gov. Pat Quinn has reached the controversial decision to close Tamms supermax, which held state prisoners in solitary confinement. Tamms was finally shuttered for good just after the start of the new year. Now it appears that Illinois has lost a state supermax, only to gain a federal one.

Correction: The original version of this article stated that Thompson never opened.