Ever since George Zimmerman was charged in April 2012 with second-degree murder in the shooting death of Trayvon Martin, a story that sparked a firestorm of debate over racial tensions, law enforcement, and gun regulations has mostly faded from the headlines. Now it returns, with Zimmerman’s trial opening on Monday in Sanford, Florida. The case hinges on some complex and controversial questions; below are several key aspects worth considering. Also see our collection of primary documents and videos from the case for additional background.

Does Zimmerman’s story add up? A written statement and police video released last June, in which Zimmerman reenacts the deadly altercation for investigators at the scene, raised questions about Zimmerman’s story in more ways than one. He seemed to suffer from some peculiar memory loss that night regarding a street in his neighborhood of many years, and his description of the confrontation did not jibe with a prior written statement that he’d given police. More details here.

Conflicting video evidence: A cautionary reminder about trying Zimmerman in the court of public opinion: Videos emerged in the media with different views of the alleged injury to Zimmerman’s head the night of the killing. Did Al Sharpton’s show on MSNBC play fast and loose with the footage? 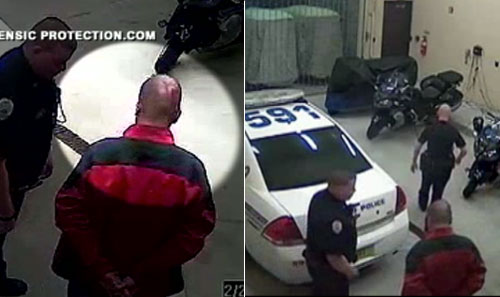 Zimmerman’s 911 obsession: The case was tinged with racial tensions from the start. While Zimmerman and his supporters maintained that racial bias played no part in his pursuit of Martin that night, police call logs surfaced last March suggesting that Zimmerman was obsessed with suburban law-and-order minutiae—and black men stalking the neighborhood. Other police records showed Zimmerman had called 911 a total of 46 times between 2004 and the day he shot Martin. Federal investigators later conducted local interviews and concluded that Zimmerman was not a racist.

Florida was just the beginning for “Stand Your Ground” gun laws: The Sunshine State’s controversial legislation allowing citizens to defend themselves with lethal force was the “first step of a multi-state strategy,” said the National Rifle Association’s Wayne LaPierre after the law was signed in 2005. As an in-depth Mother Jones investigation last summer revealed, Stand Your Ground laws—backed by the NRA as well as the American Legislative Exchange Council, a corporate-sponsored consortium of lawmakers—spread to two dozen other states by 2012. Meanwhile, studies showed that Stand Your Ground laws do not deter crime, are racially discriminatory, and are associated with increases in homicides.

President Obama: “If I had a son, he’d look like Trayvon.” In a sign of just how big the case had become last spring, the president himself weighed in. “I think all of us have to do some soul searching to figure out how does something like this happen,” Obama said at the White House nearly a month after the killing. “When I think about that boy, I think about my own kids…If I had a son, he’d look like Trayvon. I think they are right to expect that all of us as Americans are going to take this with the seriousness this deserves, and that we’re going to get to the bottom of exactly what happened.”

Right-wing reactions: There was no shortage of outrage from conservatives over Obama’s comments, as MoJo‘s Adam Serwer detailed here. In other developments from the political right:

When neo-Nazis showed up in Sanford allegedly to protect “white citizens in the area who are concerned for their safety,” a Fox News affiliate in Orlando referred to them as a “civil rights group.” (Eventually Fox-35 in Orlando corrected the problem, after two more iterations of their headline.)

Marking a new low in the case, an unidentified entrepreneur aimed to make money by selling gun targets online that depicted the slain teenager:

Conveying a different type of right-wing impulse in response to the story, Fox News’ Geraldo Rivera infamously blamed Martin’s death on his hoodie:

And what’s happened in more recent months? ThinkProgress rounded up some additional developments in the case here, including Zimmerman’s lawsuit against NBC News, his request to the court to be freed from GPS tracking (denied), and his six-figure personal spending since he started soliciting donations for his defense fund.

For much more background on the case, see our in-depth explainer (with nearly 50 updates) published in the wake of the killing, including a collection of primary documents, reports, and videos.