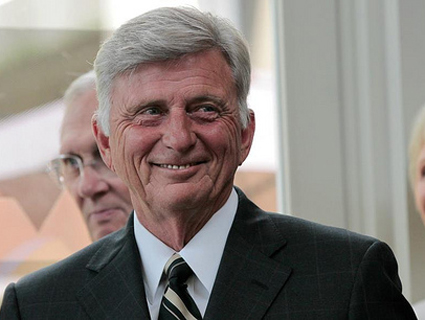 In Arkansas, Democratic Gov. Mike Beebe is finding himself at odds with an extreme anti-abortion legislature, vetoing one bill that would ban abortion at 12 weeks and another bill that bans them after 20 weeks. The Republican-controlled legislature overrode his veto on the 20-week ban last week, and will attempt to do so on the 12-week ban as well.

Beebe vetoed the 12-week ban, called Senate Bill 134, on Monday. The bill is “blatantly unconstitutional,” Beebe said in a statement:

In short, because it would impose a ban on a woman’s right to choose an elective, nontherapeutic abortion well before viability, Senate Bill 134 blatantly contradicts the United States Constitution, as interpreted by the Supreme Court. When I was sworn in as Governor I took an oath to preserve, protect, and defend both the Arkansas Constitution and the Constitution of the United States. I take that oath seriously.

Last week, Beebe vetoed House Bill 1037, a measure banning abortions after 20 weeks. But the legislature had enough votes to override his veto, making Arkansas the ninth state to impose this type of ban in the past three years. These bans contradict the Supreme Court’s previous ruling that abortion should be legal up until the point that the fetus is viable—which is usually 24 weeks or later. (The Center for Reproductive Rights has filed suit against one of those laws in Arizona.)

But Arkansas’ latest bill goes ever farther, and if the legislature overrides Beebe’s veto, it will be the strictest ban in the country. “Lawmakers in Arkansas are placing women’s lives on the line by passing the most severe ban on access to safe, legal medical care this country has seen in recent years,” Talcott Camp, deputy director of the ACLU Reproductive Freedom Project, said in a press release. “Nobody can predict what kinds of decisions a woman may have to make during a pregnancy, and it is outrageous for politicians to attempt to interfere in this serious and personal decision that a woman has to make with her family and her doctor.”

Beebe isn’t stridently pro-choice; NARAL Pro-Choice America says he has a “mixed” record. The main argument he gave for vetoing the 12-week ban is that it will cost the state a lot of money to defend the inevitable legal challenges. “The adoption of blatantly unconstitutional laws can be very costly to the taxpayers of our State,” he said, noting that a 1999 case against a previous state abortion law cost the government $147,000 in legal fees. “Lawsuits challenging unconstitutional laws also result in the losing party—in this case, the State—being ordered to pay the costs and attorneys’ fees incurred by the litigants who successfully challenge the law. Those costs and fees can be significant.”