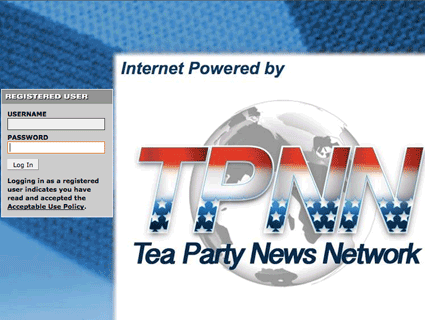 People attending the storied Conservative Political Action Conference this year were treated to free wireless internet by one of the event’s sponsors, the Tea Party News Network, which picked up the $75,000 tab at the Gaylord Hotel in Maryland. “We’re delighted that we could provide free internet for all CPAC 2013 attendees,” Scottie Nell Hughes, the news director of the Tea Party News Network, said in a press release. “We wanted to ensure that at the largest annual gathering of conservatives the thousands of bloggers and grassroots conservative activists have the ability to share their thoughts and message with the world.”

But as the saying goes, there is no free lunch, and CPAC attendees might be sorry they took advantage of TPNN’s offer.

People at the conference have been required to submit their names and email addresses to access the free wireless. Thanks to its sponsorship deal, all of that contact information is going back to the Tea Party News Network, a group that other grassroots tea party organizations have criticized as nothing but a data-mining operation.

The Tea Party News Network is a project of TheTeaParty.net, which is itself a spin-off of a nonprofit group called Stop This Insanity!. I wrote about the group last month when it was raising money for and sponsoring the “Day of Resistance” gun rallies around the country. The outfit was founded by Todd Cefaratti, who runs a “lead generation” business in Mesa, Ariz. Lead generation, for the uninitiated, is the business of finding potential contacts ripe for a sales pitch of some sort. In Cefaratti’s case, his business harvests leads for the reverse mortgage industry, which has been flagged by consumer advocates as rife with many of the same predatory lending issues as the subprime mortgage industry that helped crash the financial system in 2007.

Tea party activists have complained that after logging in to or making donations on TheTeaParty.net or related sites, they found themselves besieged with spam from precious metal dealers who’d been renting the group’s email list through Newsmax. The group has repeatedly come under fire for raising lots of money from tea party groups but failing to spend much of it on politics, and has run afoul of the FEC. During the presidential campaign, it raised $1.2 million but spent only $52,000 on candidates. Much of its money gets spent on advertising, including many TV ads that run with a variety of different tea party names on gun and hunting shows. The Tea Party News Network sent out fundraising emails asking for donations to cover the $75,000 CPAC wireless bill.

Neither the Tea Party News Network nor TheTeaParty.net have responded to requests for information about what they intend to do with the emails they collect from CPAC.