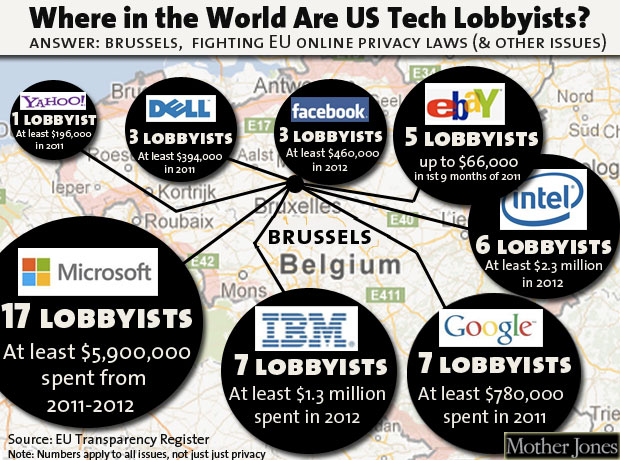 When the US government tried to regulate the internet in 2011, through the Stop Online Piracy Act and a corresponding Senate bill, Silicon Valley tech giants and civil libertarians went ballistic. The two groups, often at odds, banded together to fight the controversial bills, which would have given the government enormous power to regulate web content and censor sites that appeared to be violating copyright laws. The protesters organized internet blackouts, and squashed the measures before you could type “Free streaming Walking Dead.” But now some of the companies that fought SOPA, including Google, Yahoo, Facebook, Amazon, and eBay, are joining with initial SOPA supporters and the Obama administration to thwart the European Union’s attempt to protect the personal information of European citizens—and American privacy advocates are back to fighting the tech behemoths.

In January 2012, the European Union proposed overhauling existing privacy laws in its member states. If passed by the European Parliament, the proposal will turn the EU’s privacy recommendations into a legal requirement. This is some of the most powerful legislative action the EU can take, because it overrides all the national laws of members. Unlike SOPA, the laws aren’t targeting copyright violations; instead, they would require that companies across Europe do more to protect consumers’ privacy. That includes potentially giving hundreds of millions of European citizens the ability to opt out of online web tracking—which is exactly the kind of information companies like Facebook use to target advertising and attract revenues.

In the United States, corporations dominate tech policy and privacy is a consumer issue, but the EU considers privacy a civil and human right, explains Jeffrey Chester, executive director for the Center for Digital Democracy. The new EU laws would affect users outside of Europe (including US websites accessed by Europeans), so it’s not surprising that US-based companies are swarming Brussels, where the European Parliament is attempting to finalize the proposals by April (see map).

Peter Fleischer, Google’s Global Privacy Counsel, argues that the EU is stifling innovation. “I had always thought it was sensible to apply Europe’s privacy laws worldwide, in the interests of maintaining one, consistent worldwide standard,” he writes on his personal blog. “I’m changing my mind now…Despite all its good intentions, Europe is giving the world hopelessly vague privacy laws.” (Google has seven lobbyists in Brussels and spent at least $780,000 there in 2011, and the EU announced this week it plans to take action against Google for violating Europe’s existing privacy laws.)

Marc Rotenberg, president and executive director of the Electronic Privacy Information Center, says large internet firms are opposing the privacy bills because they simply don’t want to be regulated: “In the US they oppose copyright rules, but the way that plays out in Europe is that these companies are opposing privacy.” The Center for Digital Democracy’s Chester says his group supports the European proposals because they give individuals, not corporations, the ability to decide how their personal data can be collected and used. “But to [these companies] it threatens to kill off the digital golden goose they have fattened so well, because they have to ask permission and explain what they do,” he says. Both groups, along with 15 US NGOs, sent a letter to the Obama administration and US ambassadors earlier this month encouraging Washington to butt out of the EU decision making.

Companies that initially supported SOPA—such as Dell, Intel, and Microsoft—have lobbyists in Brussels, along with companies that vehemently opposed SOPA, including Google, Facebook, Yahoo, and eBay, according to the EU’s Transparency Register. The American Chamber of Commerce to the European Union, which speaks for American business in Europe, also has nine lobbyists there. “These are businesses who most certainly do not want to strengthen consumer privacy,” Joe McNamee, the EU advocacy coordinator at European Digital Rights, a coalition of European privacy groups, tells Mother Jones. “Of course, some are seeking minor changes, while some are seeking destruction of the whole legal framework. It is not the case that every company lobbying on the proposal are demanding the same thing.”

Tech companies—including Google—are particularly concerned about the “Right to Be Forgotten” provision, which gives users (like say, party-happy college students) the right to erase their digital footprint. Google’s Fleischer writes that this would force search engines like Google to remove information and is paramount to censorship, “more pernicious than book burning.” Privacy experts agree that this part of the proposal should be carefully considered for First Amendment issues, but Chester points out that “the industry is using this issue as a political smokescreen to help kill off the [whole] law.”

According to a document put online by LobbyPlag, an open source website which aims to track the influence of European lobbying on the privacy proposals?, Facebook has submitted comments that oppose giving users the ability to opt out of targeted advertising, claiming that it “impairs companies’ ability to innovate and negatively impacts the users experience.” A Yahoo document obtained by Center for Digital Democracy shows that Yahoo is asking for amendments so that users don’t have to give “explicit consent” for web companies to take their personal data, because Yahoo maintains that all the data-tracking is anonymous.

Will all this lobbying make a difference? A lobbying firm representing the National Business Coalition on E-Commerce and Privacy has found that the privacy proposal has not been weakened by the efforts, according to Politico. But LobbyPlag maintains that parts of the privacy bill are being amended to match the lobbyists’ suggestions word-for-word. “It’s too soon to say, but there’s a very real possibility they will have a very great effect,” says Jay Stanley, senior policy analyst at the American Civil Liberties Union.

The Obama administration has entered the fray on the same side as the tech biggies. The US Commerce Department is opposing the proposals because it “is concerned that sweeping new privacy controls could hurt the United States tech industry in Europe,” according to the New York Times. Chester notes that even though Obama issued a progressive Privacy Bill of Rights last year, the administration is “relying too much on [voluntary] self-regulation” and bending to desires of the tech industry.

European privacy advocates, like their stateside comrades, want the United States to stop meddling in this matter: “The US government would never accept lobbying by the EU, if it was seeking to undermine the rights of US citizens,” McNamee says. “It is totally inappropriate.”