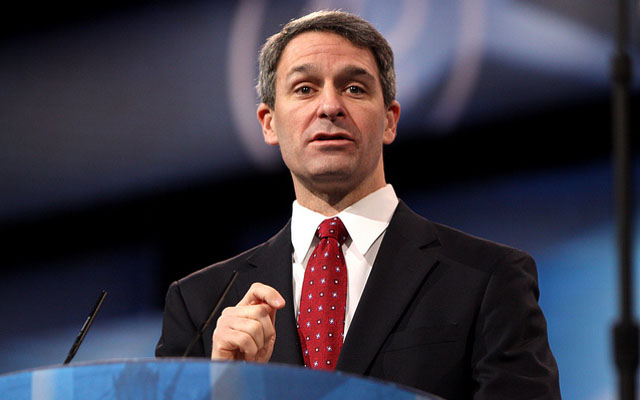 The Virginia governor’s mansion always seemed like a high ambition for Ken Cuccinelli, who is arguably America’s most divisive state attorney general. Now that he’s officially running on the GOP ticket, even Republicans admit that Cuccinelli—an unabashed culture warrior who has led the fight against Obamacare—needs to avoid the controversies that piled up during his three years as AG. (Sample headlines: “Ken Cuccinelli’s climate-change witch hunt.” “Virginia attorney general to colleges: End gay protections.” “After breast controversy, Cuccinelli ditches new staffer lapel pins.”) Virginia voters, as Gov. Bob McDonnell demonstrated in 2009, are more likely to support a calm, reasonable conservative who focuses on jobs and the economy.

But the latest row in the gubernatorial race, which pits Cuccinelli against former Democratic National Committee chairman Terry McAuliffe, has put the spotlight back on Cuccinelli’s hardline views. A week ago, the state Democratic Party released a short video from a June 2012 event for the pro-life Family Foundation. In the clip, Cuccinelli compares the anti-abortion movement to the abolitionist movement. “Our experience as a country has demonstrated that on one issue after another,” he said. “Start right at the beginning, slavery. Today, abortion. You know, history has shown us what the right position was.”

Pro-life groups have drawn the same comparison for years. But the release of the clip has spawned nearly two dozen stories in the state and local media, condemnations from fellow pols, cries of support from conservatives, and fresh scrutiny of Cuccinelli’s history of comments related to abortion. In short, it has breathed new life into the debate over whether Cuccinelli’s view on social issues are too extreme. “The [Virginia] GOP would prefer to campaign on economic issues, so potentially inflammatory statements about abortion are off-message,” says Charles Walcott, a professor emeritus of political science at Virginia Tech. “That’s why the Democrats are massaging this one—it fits into the ‘Cooch is an extremist’ narrative.”

Robert Holsworth, a retired political science professor at Virginia Commonwealth University, would concur. “While people in the movement are not offended at all, suggesting moral equivalence between something as horrible and brutal as slavery and abortion, it antagonizes many people outside the movement,” he told the Associated Press. “And the Democrats are going to use that to their advantage because they want people to find [Cuccinelli] an extremist from another planet.”

Republican Lt. Gov. Bill Bolling, who had mulled an independent bid for governor, said Cuccinelli’s comments were “a silly thing to say” and could hurt the GOP’s efforts to retain the governor’s seat. “I don’t understand why he felt compelled to make that comparison,” Bolling told the Virginian-Pilot. “Any second that we spend being distracted by discussions about whether or not abortion and slavery are comparable is a wasted second.”

Soon after the video’s release, the Washington Examiner dug up a 2008 version of the same comment; Cuccinelli, then a state senator, drew connections between the work of the famous abolitionist William Wilberforce and his own efforts to restrict abortion. “Wilberforce was on to something in his approach to his opponents (and the disinterested), and I wonder if similar introspection about life and abortion in our nation and in our Commonwealth—particularly in the Virginia Senate—might change the hearts of some legislators?” he wrote. “Wilberforce offers us a model worth imitating, and despite setbacks like this morning in the Senate’s Ed & Health Committee, one of the greatest lessons from Wilberforce—perseverance—will serve us all well as we work in the long term to change the course of Virginia toward a greater respect for life and the families that sustain and nurture life.”

The Wilberforce comparison didn’t end there. In 2011, Students for Life of America, the country’s biggest youth-focused pro-life group, awarded Cuccinelli its Wilberforce Leadership Award, honoring “his tireless efforts to protect the unborn.”

At the recent Conservative Political Action Conference, Marjorie Dannenfelser, president of the pro-life Susan B. Anthony list, Cuccinelli’s biggest financial supporter, rehashed the comparison: “There’s a point when you become culpable in the killing of other people, because of what the government is making you do,” she said. “And that is one of those tipping-point moments. It happened in slavery when slaves had to be returned to their masters. When our hands are bloodied by this, it becomes a whole ‘nother thing.” (Last month, Dannenfelser’s group said it would spend at least $1.5 million to get Cuccinelli elected.)

In response to the video, a pro-life blogger argued that abortion is worse than slavery: “Have you ever heard of a runaway fetus? The ‘Underground Birth Canal?'”

Virginia Democrats immediately pounced on Dannenfelser’s comments. “Ken Cuccinelli should condemn his backer’s ridiculous and offensive comparison of a woman’s constitutional right to make her own health care choices with the atrocious institution of slavery,” said Lauren Harmon, executive director of the Democratic Party of Virginia.

But it was the June 2012 video clip that got the most traction. At least a dozen local TV stations and newspapers covered the story. A local NAACP chapter blasted Cuccinelli for his comments.

Some conservatives, meanwhile, rallied to Cuccinelli’s defense, which helped to keep the story alive. Jill Stanek, a prominent pro-life writer and activist, polled her readers on whether the slavery-abortion comparison was a fair one. Bearing Drift, a right-leaning website covering Virginia politics, picked apart the comparison and concluded that slaves, in fact, were better off than unborn fetuses. “First, a slave had the choice of running away,” wrote the post’s author, Andrew Schwartz. “Have you ever heard of a runaway fetus? The ‘Underground Birth Canal?’ Nat-al Turner’s Rebellion?”

All of this is the last thing Cuccinelli needs right now. Perhaps that’s why, in response to every story on the topic, Cuccinelli’s press people invariably drag the conversation back to the economy, jobs, and “middle-class taxpayers.” (Cuccinelli spokeswoman Anna Nix did not respond to my request for comment.) But Virginia Tech’s Walcott says Cuccinelli may have trouble sticking to reasonable conservative talking points—and avoiding the culture wars—between now and Election Day. The Bob McDonnell mold “may be a bad fit for Cuccinelli,” he explains.

Virginia Democrats intend to milk the slavery-abortion dustup for all it’s worth. “We anticipate this being an issue in our communications into the fall because it’s a prime example of just how far outside the mainstream Ken Cuccinelli is,” says Brian Coy, a spokesman for the party. “I would expect it to be a part of the campaign for the duration.”