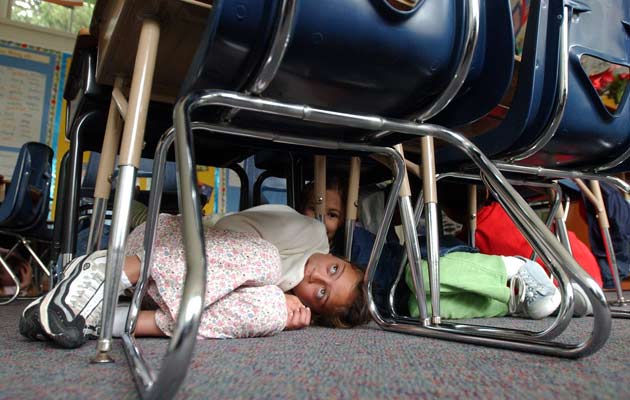 Braden Kling, an eight-year-old from Middletown, Ohio, knows what to do. His school has prepared him for the moment of reckoning. “We have this big board and we hide behind that. If he comes in, we start throwing stuff,” he explains. “Pencils, chairs, boxes, books, markers. And then we escape.”

In the aftermath of the massacre at Sandy Hook Elementary School in Newtown, Connecticut, politicians and educators have debated fiercely about how our nation should protect school children—with some schools turning to controversial tactics. Soon after National Rifle Association spokesman Wayne LaPierre proposed stationing armed guards in every school in America, an Ohio school board approved plans to arm janitors. South Dakota recently passed a law allowing teachers to pack heat in classrooms. A high school in suburban Chicago held a drill in which police fired blanks in the halls in order to give staff and students “some familiarity with the sound of gunfire.” Unsurprisingly, these kinds of measures have brought with them risks, accidents, and negative reactions.

Perhaps the most controversial approach has been instructing school children to fight back. After Newtown, one commentator was met with derision when she suggested that kids should be trained to “gang rush” a mass shooter rather than to hide from him. The US Department of Homeland Security recommends hiding or fleeing if possible when faced with the threat of a gunman, and fighting back only as a last resort.

Ever since the 1999 massacre at Columbine High, K-12 schools in many states have been required by law to have emergency management plans; often these include lockdown drills for dealing with a violent intrusion, although such an event is statistically rare. The majority use “passive” procedures in which students and teachers are told to lock their classroom doors, turn off the lights, and evacuate when possible.

But after a terrible year of mass shootings, the idea of teaching school kids to respond aggressively has gained some fresh attention. One training program used in schools called “A.L.i.C.E.”—which stands for alert, lockdown, inform, counter, evacuate—has drawn unprecedented interest since Newtown, according to its creator, Greg Crane, a former SWAT officer and schoolteacher in Texas.

After Columbine, Crane began thinking about developing what he calls his “common sense” strategies for contending with school shootings. Students aware of an intruder in the building, for example, can build barricades against their classroom doors by stacking chairs and desks. His A.L.i.C.E. training booklet recommends rearranging classroom layouts to create a “minefield” that would make movement more difficult for an assailant once inside. Defensive measures for students also include jumping out of windows to escape.

But the program also instructs students about how to go toe-to-toe with a shooter if ultimately necessary. First students should gain a “tactical advantage,” the training booklet explains, by throwing books, backpacks, desks—or anything else they can get their hands on—to disrupt the gunman. “While he’s busy ducking and covering his head from our air assault, we can now begin the ground assault,” the booklet continues. “If we can motivate a small number of the attacked to become attackers if necessary, we will decide when and how this event ends.”

“While he’s busy ducking and covering his head from our air assault,” the booklet tells kids, “we can now begin the ground assault.”

Critics say A.L.i.C.E presents safety and liability risks for students and schools. They also say that it’s reckless and unrealistic to expect students, especially young ones, to go after a gunman. Even just talking to young students about violent events and how to respond to them raises concerns, according to education and health professionals.

“A.L.i.C.E may be well intended, but it’s not well thought-out,” says Ken Trump, president of National School Safety and Security Services. “You can’t get a group of middle-school kids to simultaneously agree on chicken nuggets or pizza in the cafeteria for lunch, much less make a split-second decision to start throwing items at an armed intruder.”

Other tactics suggested by the program raise doubts for students themselves. One A.L.i.C.E-trained student, 17-year-old Alyssa Roehm, from Liberty Township, Ohio, says a teacher at her high school has a plan for potentially evacuating her second-story classroom through a window, by having students tie their jeans together to form a rope. “I think that’d be kind of weird,” Roehm says, “because, well, no one would be wearing pants.”

From the start, A.L.i.C.E has drawn criticism for its “counter” component in particular: In 2006, there was major pushback in the Texas school district that’s home to Burleson High School, where Crane, then a teacher at the school, launched the program. When parents complained about Crane teaching kids to physically attack shooters, the district dropped the procedure and Crane was “reassigned” from his teaching position, according to the Fort Worth Star-Telegram. The school no longer uses the program.

“It strikes me as an overreaction and potentially dangerous,” a school psychologist says. “School shootings are extremely rare.”

Crane says he is used to defending the program. To date, no school teaching A.L.i.C.E. has faced an active shooter situation; Crane points instead to the 1998 shooting at Thurston High School in Oregon, where 15-year-old Kipland Kinkel fired 50 rounds in the cafeteria, killing two students and injuring two dozen others before he was tackled by his classmates.

“It wasn’t a staff member who led the rush against him that took him to the ground and disarmed him. It was a 17-year-old student, Jake Rykar,” Crane notes. “If they had maintained that passive, static posture on the floor, with all those hundreds of kids in the cafeteria, there’s no telling what the outcome could have been that day.”

But Dr. Stephen Brock of the National Association of School Psychologists says teaching such tactics may cause unnecessary anxiety and stress for students, particularly young ones who are more easily traumatized. “It strikes me as an overreaction and potentially dangerous,” Brock says. “School shootings are extremely rare. The odds of a student becoming a victim are 1 in 2.5 million. The odds of getting struck by lightning? One in 700,000.”

Crane says that he has seen an uptick in interest in his program after every mass shooting—but that it has increased by an order of magnitude since Newtown. In the first weekend after the attack, Crane’s company was hit with more than 2,000 email inquiries, he says, with little letup since. To date, according to his company’s website, more than 300 schools and universities have trained 1.6 million students using A.L.i.C.E.

For Braden Kling’s dad, Tim Kling, the program represents a “better-than-nothing” approach. In the event of a school shooting, he’d hate it if his three boys were sitting ducks, he says. Still, he wonders if aggressive tactics make sense.

“I was talking to my 14-year-old about it. One of his teachers said, ‘Go after him. Kick his butt.’ I’m sitting there thinking, ‘Really? This guy has got a gun!'” He adds: “It is scary when you think about what actually happened [in Newtown] and you think, ‘What would my kid do?'”

A.L.i.C.E. and other more aggressive contingency plans now being put in place in some schools around the country seek to provide an answer to that question. And that means a new awareness, for better or for worse, for young students like Braden Kling.