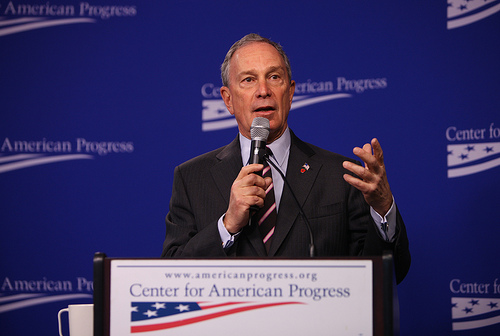 New York City Mayor Mike Bloomberg wants new gun control legislation so bad that he’s set to spend a staggering $12 million of his own money on ads targeting US senators in a dozen states.

Bloomberg’s $12 million ad buy further cements his position as the main political force challenging the clout of the National Rifle Association. For decades, the NRA has used its money and manpower to oust politicians who support any new regulation of guns in America. The threat of NRA attacks helped stifle any effort at new gun laws, including requiring background checks for most gun purchases and reinstating the ban on assault rifles, which expired in 2004. Now, by pumping money into Mayors Against Illegal Guns and Independence USA, his super-PAC, Bloomberg hopes to counter the might of the NRA, while giving cover to pro-gun-control legislators.

Here’s more from the Times on Bloomberg’s new ad blitz:

In each [state], the commercials urge support for the measure to require background checks for nearly all firearms purchases, not just those in gun stores, the most debated element of the legislation and a coveted goal of gun control advocates.

Mr. Bloomberg has singled out Mr. Flake, who already voted against the expansion of background checks in the Senate Judiciary Committee, by producing a special, scolding commercial aimed at Arizona. “Flake’s vote,” the ad declares, equals “no background checks for dangerous criminals.”

The mayor, who over the years has spent tens of millions of dollars to support his favored candidates, holds the power to use his “super-PAC” to wield influence in the midterm Congressional elections next year and beyond. He said he would heavily favor “candidates who will stop people from getting killed.”

“There is an easy measure of how you decide who those are,” he said, noting that gun rights groups rate lawmakers. “The NRA keeps score of it for you. They are public information.”

To those who might fear his financial might, he added: “If they pass sensible gun legislation, there is not an issue.”

Bloomberg has scored a handful of recent gun-related victories. He pumped nearly $10 million into Independence USA in the 2012 elections; the super-PAC went on to spend $3 million to defeat Rep. Joe Baca (D-Calif.), a pro-gun rights congressman. Independence USA also spent millions last month in the Democratic primary for Illinois’ 2nd congressional district to defeat Debbie Halvorson, who had an “A” rating from the NRA. Democrat Robin Kelly, whom Bloomberg supported, ultimately cruised to victory.

The NRA has said it plans to fire back at Bloomberg with an advertising campaign of its own. And an NRA lobbyist told the Times that it’s confident that many Americans won’t buy into Bloomberg’s message. “What he is going to find out is that Americans don’t want to be told by some elitist billionaire what they can eat, drink and they damn well don’t want to be told how, when and where they can protect their families,” Chris Cox, the NRA’s top lobbyist, said.