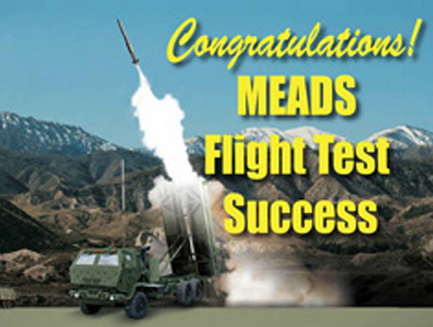 Conservatives are throwing a hissy fit about a few hundred thousand dollars spent on a scientific study about duck sex, but over at the Pentagon, Congress is spending $380 million on a missile program that has no funding authorization, doesn’t work, and the Department of Defense doesn’t plan on buying. So why are we still paying for it? Because Germany and Italy are making the US feel awkward, and when you back out of a defense contract, you have to sell your first-born child. Also, jobs.

The Medium Extended Air Defense System (MEADS), contracted to Lockheed Martin, is a joint project with Italy and Germany intended to produce a weapon that will intercept ballistic missiles. If you read Lockheed Martin’s website, MEADS sounds really cool. This “hit-to-kill” missile will “defeat tactical ballistic missiles, cruise missiles, unmanned aerial vehicles and aircraft, [and provide] full 360-degree engagement.” Woah! (Shhh, forget about the fact that Lockheed Martin’s program is basically a duplicate of the “Patriot” missile program that the US is already paying for. This one sounds cooler, okay?)

Unfortunately, according to the Office of Secretary of Defense, MEADS has had serious technical, management, schedule, and cost problems since it was introduced in the mid-1990’s” and has been unable to “meet schedule and cost targets.” The Department of Defense decided in 2011 it didn’t want the system because it couldn’t afford to pay for two missile programs, and it was not helping US national security. For once, Congress actually agrees: Last week, an amendment proposed by Sen. Kelly Ayotte (R-N.H.) that stripped funding from this “missile to nowhere” passed 94-5 with blinding bipartisan support.

That didn’t last long: Congress then passed a “stop-gap spending measure” that said that the $380 million needed to be used to complete the project, not pay termination fees. (According to Politico Pro, Sen. Ayotte has placed a hold on a top Pentagon acquisitions nominee until the Pentagon explains why it isn’t scrapping the program.)

As Sen. Dick Durbin (D-IL), chairman of the defense appropriations subcommittee, argued on March 19, “The cost to finish the development of this program is almost exactly the same as the cost to unilaterally terminate it.” According to DoD Buzz, last year, those fees were at least $800 million, although no official number has been released. Sean Kennedy of Citizens Against Government Waste argues that the best way to get out of this sticky scenario is for the “US to negotiate an agreement with its allies to collectively withdraw from the MEADS contract.”

But Germany and Italy seem dead-set on the program, and have been guilt-tripping the US big-time, sending letters that say things like: “A final decision by the US Government to prohibit further funding for MEADS at this advanced stage would lead to a significant loss of technology for which we have commonly worked so hard. It would also be perceived as a serious setback for transatlantic cooperation in general.”

Lockheed Martin certainly isn’t upset about the US paying to complete the program. According to Reuters, “Lockheed and the MEADS consortium [are planning] a fourth quarter 2013 flight test to prove the MEADS missile defense system can intercept a ballistic missile.”

Ben Freeman, Ph.D, an investigator for the Project On Government Oversight, where I used to work, tells Mother Jones that “my understanding is that we’ll save money by terminating now… The program has had years to do “proof of concept,” and nothing has been proven. It’s time to cut our losses.”