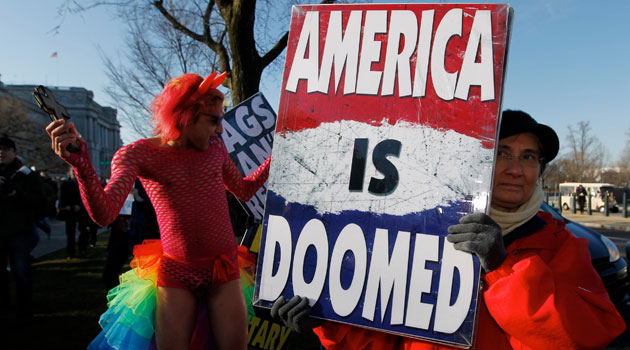 On Tuesday, the Supreme Court heard oral arguments in the first of two marriage equality cases, and the best argument the chief defender of California’s ban on same-sex marriage could muster was that his side would ultimately lose.

Americans’ understanding of marriage is “changing and changing rapidly in this country, as people throughout the country engage in an earnest debate over whether the age-old definition of marriage should be changed to include same-sex couples,” argued Charles Cooper, who represented Californians supporting Proposition 8, California’s ban on same-sex marriage. He was trying to convince the justices that Prop. 8 does not violate the constitutional rights of same-sex couples. In doing so, though, he acknowledged that acceptance of same-sex marriage rights is galloping forward, and he argued that the Supreme Court should allow that process to continue without interference from the Supreme Court. In other words, Californians whose marriage rights were taken from them at the ballot box should wait patiently for the country to evolve as quickly as ambitious Democratic politicians. (On Wednesday, the court will hear a challenge to the Defense of Marriage Act, which bans federal recognition of same-sex marriages performed in states when they are legal.)

It’s never a good idea to predict the results of a Supreme Court case based on oral arguments, and the strongest presentation at the Court isn’t always the one that wins. But from his first, hoarse remarks, it was clear that Cooper had walked into the heat of battle lightly armed. An experienced litigator who served in the Reagan-era Justice Department, Cooper took up the defense of Prop. 8 after California officials declined to back the law in court. He was supposed to argue that the state had a legitimate interest (other than simple bigotry) in banning same-sex couples from getting married, but he had difficulty finding one.

First, Cooper tried saying that marriage was supposed to be about procreation, and same-sex couples can’t procreate—which would imply that the state could ban marriages between heterosexual couples incapable of having children. When Justice Elena Kagan asked whether states could ban couples over the age of 55 because they wouldn’t be able to have kids, Cooper argued that “it is very rare that…both parties to the couple are infertile.” The chamber erupted in laughter. “No really, because…if both the woman and the man are over 55, there are not a lot of children coming out of that marriage,” Kagan said, and the chamber filled with laughter again. Justice Stephen Breyer was more blunt: “I mean, there are lots of people who get married who can’t have children.”

When it came to same-sex couples who already have children, Cooper argued that some nebulous harm could come to children raised in same-sex families. But California already has thousands of children with same-sex parents, and it is unclear what interest is served by preventing those parents from marrying. Finally, Cooper argued, the tradition of marriage is really old and you never know what might happen if it is “redefin[ed]…as a genderless institution.” Kagan asked Cooper what harm he could see happening to opposite-sex marriages. Once again, Cooper couldn’t answer. Justice Anthony Kennedy, whose vote will likely decide the fate of Proposition 8, impatiently asked Cooper, “Are you conceding the point that there is no harm or denigration to traditional opposite-sex marriage couples?”

No, Cooper said, without providing any examples of harm. When asked by Justice Sonia Sotomayor whether states would also have an interest in legalizing employment discrimination based on sexual orientation, Cooper, his voice trailing off, said, “I do not have anything to offer you in that regard.” It felt like he had left the room.

Justice Antonin Scalia, trying to throw Cooper a life preserver, contended that there is “considerable disagreement among sociologists” whether or not being raised by same-sex couples is bad for kids. Actually, there’s only disagreement if you count the work of sociologists hired by same-sex marriage opponents. The American Psychological Association has found that “lesbian and gay parents are as likely as heterosexual parents to provide supportive and healthy environments for their children.” And Scalia, who once used “flagpole sitting” as a crude euphemism for gay sex, added the disclaimer, “I take no position on whether it is harmful or not.”

Perhaps mindful of history, the conservative justices mostly noted that the established tradition of marriage shouldn’t be messed with. Same-sex marriage is younger than “cellphones or the internet,” Justice Samuel Alito said. Chief Justice John Roberts worried about changing an “institution that’s been around since time immemorial.” Later, Roberts suggested that since children of same-sex couples are doing okay, there’s no need to recognize their parents’ relationships as marriages.

Solicitor General Donald Verrilli Jr. was no model of moral clarity. The Obama administration has taken the position that states that grant benefits to unmarried same-sex couples cannot deny them marriage rights—a position that would leave the states most hostile to gay and lesbian unions with no obligation to recognize same-sex marriage. “[Y]ou are willing to wait in the rest of the country,” Roberts said. “You’re saying [same-sex marriage] has got to happen right now in California, but you don’t even have a position about whether it’s required in the rest of the country.” Scalia, who apparently neither read the Obama administration’s brief nor paid full attention during oral argument, raged that Verrilli was “asking us to impose [same-sex marriage] on the whole country, not just California.”

“You could have said [of interracial marriage]—you can’t get married, but you can have an interracial union. Everyone would know that that was wrong.”

Theodore Olson, the former solicitor general for President George W. Bush, seemed the only lawyer in the room who knew exactly how he felt and how to say it. When Roberts implied that same-sex marriage supporters were merely interested in marriage as a “label,” Olson said, “You could have said [of interracial marriage]—you can’t get married, but you can have an interracial union. Everyone would know that that was wrong.”

Likewise, 70 percent of Americans under the age of 33 say it is wrong to deny marriage rights to same-sex partners. The average age of the Supreme Court justices, though, is 67, and Kennedy, author of two Supreme Court opinions on gay rights, seemed reluctant to agree with Olson. Still, he anguished about same-sex couples denied legal recognition. “There are some 40,000 children in California…that live with same-sex parents, and they want their parents to have full recognition and full status,” Kennedy told Cooper. “The voice of those children is important in this case, don’t you think?”

If the high court wants to dodge the issue, it can simply say that supporters of same-sex marriage ban in California cannot legally sue because they have not been harmed by the lower court ruling that scrapped Prop. 8. But it’s unclear what that would mean for same-sex couples in California. This route might appeal to both sides for different reasons. The conservative justices could avoid placing themselves fully on the wrong side of history, and the Democratic appointees on the court could allow the political process to take its course, knowing that the tide of public opinion appears to have turned against opponents of LGBT rights. They would also be sidestepping the question of whether a state can strip a group of people of fundamental rights by a show of hands.

When it was time for Cooper to offer his rebuttal to Olson and Verrilli, he sounded like he was begging the justices to allow his side to lose in the court of public opinion—rather than in the high court itself. “That democratic debate [over marriage equality], which is roiling throughout this country, will definitely be coming back to California,” Cooper said. “It is an agonizingly difficult, for many people, political question. We would submit to you that that question is properly decided by the people themselves.”

You can listen to the whole argument here: