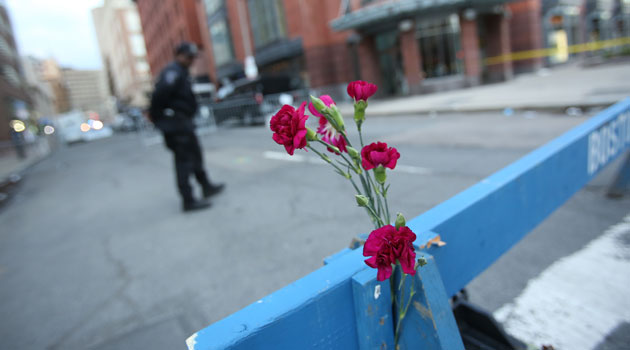 Flowers on a Boston street corner memorialize those injured and killed in the Boston Marathon bombing. Ken Crane/Zuma

From House oversight committee Chairman Rep. Darrell Issa (R-Calif.) to Sara El-Amine, the national director of President Obama’s political nonprofit, Organizing for Action, the Arab American community can count the Obama administration’s closest political allies and enemies among their number. Both were present Tuesday night as the Arab American elite gathered to celebrate their accomplishments at a black-tie event hosted by the Arab-American Institute in Washington, DC. Yet through the revelry and clinking of glasses, and the cheerful chitchat in English and Arabic, the terrifying attack in Boston cast a shadow over the evening.

Veteran CNN and ABC News journalist Christiane Amanpour was there to receive an award named for celebrated former New York Times foreign correspondent Anthony Shadid, whose death in Syria last year was a personal loss to many in attendance. Amanpour carefully broached what she called “the elephant in the room.”

“How many of us feel this burden of association and hope beyond hope that this won’t turn out to be what we are afraid it might be?” said Amanpour, who is partially of Iranian descent. “When we know who did this, we will all unite in strong and unequivocal condemnation.”

For many Arab Americans and Muslim Americans, flashing news alerts about another attack causing mass casualties brings anxiety over whether or not the perpetrator is a member of their communities, and if so, whether they will bear collective blame for the actions of isolated extremists. It’s a sinking feeling many minority groups have to cope with. But since the 9/11 attacks, the Arab American and Muslim American communities have been frequently singled out for suspicion by law enforcement, and have faced derision even from some public officials.

Tuesday, despite carefully worded statements from law enforcement and President Obama himself stating that the motive and identity of the perpetrators remained unknown, anti-Muslim and conservative bloggers narrowed in on a young Saudi student—who was never identified by authorities as a suspect, despite erroneous news reports—as the individual responsible for the carnage in Boston. By Tuesday afternoon, authorities said he was himself a victim.

“It’s devastating, I’ve got this sinking feeling in the pit of my stomach,” said one Arab American community organizer on Tuesday night. “At the same time, I’m like, can we cool it with the ‘I hope he’s not Arab or Muslim thing’?” Community groups face a catch-22 in this situation, because any preemptive action on the part of Arab and Muslim advocacy groups to respond to unsubstantiated suspicion has the effect of cementing the association between Arabs, Muslims and terrorism in the public mind.

Until those responsible for the bombings are uncovered—there were conflicting reports on Wednesday afternoon about whether authorities had arrested a suspect—Arab and Muslim Americans will be on edge. Said one Arab American activist at Tuesday’s dinner, “Everyone in this room is holding their breath.”