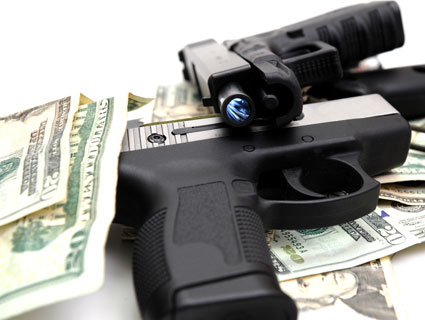 Sens. Joe Manchin (D-W.Va.) and Pat Toomey (R-Pa.) have been forced this week to consider further retooling their bill for expanded gun background checks, which Senate Majority Leader Harry Reid told reporters on Tuesday still lacks the 60 votes it needs to overcome a filibuster. The National Rifle Association and senators opposed to the bill continue to argue that it would unfairly burden lawful gun owners while doing nothing to prevent future tragedies like the one in Newtown.

In fact, the bill does an awful lot that should please the pro-gun lobby. Which helps explain why, on Sunday, the gun-rights group Citizens Committee for the Right to Keep and Bear Arms endorsed the bill and the “numerous advances for our Constitutional right to keep and bear arms that it contains.” (Even the NRA, consulted during the compromise talks, initially called the bill a “positive development,” as opposed to the stricter gun-control plan initially proposed by Sen. Chuck Schumer; the NRA later backtracked, saying the compromise bill would violate the Second Amendment.)

So, how much would the Manchin-Toomey bill actually expand gun rights? Quite a bit, in its current form. While broadening background checks to some degree, the bill also:

Despite all this, some gun control groups are supporting the bill on account of its other measures, including giving states funding incentives to improve reporting of prohibited buyers to the National Instant Criminal Background Check System, and expanding record-keeping requirements for licensed dealers.

In support of the bill, Mayors Against Illegal Guns has targeted uncommitted senators with an ad campaign. Gabby Giffords’ group, Americans for Responsible Solutions, which supports universal background checks, launched a petition urging Congress to support the bill.

But other groups have been more reserved in their support. The Brady Campaign to Prevent Gun Violence supports the majority of the bill but expressed concern with its measures allowing interstate handgun sales, regulating interstate gun transportation, exempting concealed-carry permit holders from background checks, expanding sellers’ immunity from lawsuits, and limiting the time allowed to conduct gun-show background checks. Coalition to Stop Gun Violence spokesman Ladd Everitt expressed many of the same reservations with the bill’s “give and take,” but said it would be a step in the right direction. “It would have been a hell of a lot more dangerous if we weren’t regulating gun shows,” he said.

When Congress last passed background check legislation after the 2007 Virginia Tech massacre, gun control groups weren’t as supportive. The Violence Policy Center released a joint statement then with the Coalition to Stop Gun Violence and Legal Community Against Violence, saying the bill had been “hijacked by the gun lobby.” They criticized the bill for loosening record-keeping on the mentally ill—and for a measure similar to Manchin-Toomey’s proposal to restore veterans’ gun rights. (The Violence Policy Center, whose current efforts have focused on an assault weapons ban, didn’t respond to requests for comment about the Manchin-Toomey bill.)

The Senate plans to vote on the Manchin-Toomey compromise on Wednesday.