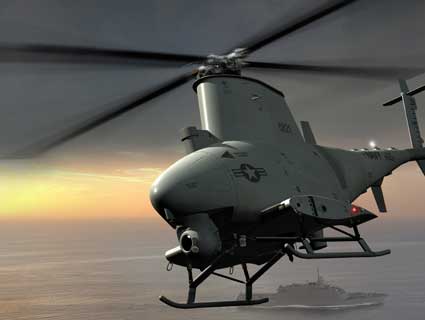 Defense cuts have forced commanders at Southern California’s Naval Base Ventura County to idle planes and cancel troop deployments, but you’d never know it from looking at nearby defense contractor Northrup Grumman: Its stock price has risen 9 percent in less than a month, buoyed by brisk sales of drones such as the Fire Scout unmanned helicopter, which will be deployed at the base this summer.

Indeed, lean times in the public sector appear to be helping drone manufacturers, as they pitch unmanned aircraft as cheaper replacements for a wide range of activities involving human labor and/or dangerous conditions. “We can capitalize on this budget-constrained environment to keep this development going,” explained Janis Pamiljans, Northrup Grumman’s head of unmanned air systems.

Pamiljans was addressing a who’s who of manufacturers, hobbyists, and public officials who showed up at the naval base last week during a conference on civilian applications of drones (the industry calls them “unmanned aerial vehicles”), which could constitute a $90 billion market within a decade—or so says the industry’s trade group, the Association for Unmanned Vehicle Systems International (AUVSI). “We are not darkening the skies yet,” said Richard Christiansen, the vice-president of the NASA contractor Sierra Lobo Inc., “but we are poised.”

While the military has infamously used drones for overseas surveillance and lighting up terrorism suspects (and civilians), it’s also increasingly relying on them for more prosaic tasks such as cargo transport. Civilian police, fire, and agriculture authorities, meanwhile, see uses for small drones that can operate at a fraction of the cost of manned helicopters. Drones have been proposed or used for chasing storms, spying on wildlife poachers, monitoring deforestation, going into places inhospitable to humans (think Fukushima)—and even news reporting. “I submit to you that as we get more comfortable with this technology, it’s going to be economics that drives how they play,” said Mike Francis, the chief of advanced programs for the United Technologies Research Center, which is developing a drone for use by first responders.

The invention of drones is “akin to the advent of the jet engine. This is going to change the face of how the FAA manages aviation.”

One of the biggest winners from the coming drones boom could be Southern California’s beleaguered aerospace industry; boosters say the technology could do for SoCal what the internet did for Silicon Valley. The state has by far the nation’s largest concentration of drone manufacturing, including small but fast-growing outfits such as Aerovironment, AirStar International, and 3D Robotics that sell to local governments, film crews, and hobbyists. Manufacturers and local politicians recently formed the Southern California Unmanned Systems Alliance to push the Federal Aviation Administration to establish one of six new test sites for commercial drones at the Ventura County base.

“The more programs you can have assigned to your facility, the more likely you are to survive” base closures, said base commander Capt. Vance Vasquez. The base already operates what may be the world’s largest drone, a remote-controlled 563-foot-long destroyer ship that tests self-defense weaponry against live missiles fired from shore. Of the base’s new Fire Scout unmanned helicopter, Vasquez said: “It may replace all manned aviation at some point.”

And then some. Congress recently ordered the FAA to figure out how to incorporate drones into commercial airspace, setting the stage for the day when drones might be used to deliver pizzas or track Lindsay Lohan’s every public movement. FAA assistant division manager Keith Ballenger told conference attendees that the invention of drones is “akin to the advent of the jet engine. This is going to change the face of how the FAA manages aviation.”

Young people “don’t know privacy, because they’ve never had it. So we could just wait this thing out!”

But while California is on the cutting edge, it’s also leading the backlash. On Tuesday, protesters gathered outside a conference hotel to demonstrate against the involvement of politicians such as Lt. Gov. Gavin Newsom, who was a no-show despite his billing as a cosponsor. “ICYMI, the politicians who seem like they want to protect your privacy against drones really do not care about your privacy at all,” read one tweet by the California privacy group NOMBY (Not Over My Backyard).

The drone industry acknowledges that privacy concerns are its single biggest obstacle. At the conference, AUVSI president Mike Toscano showed a photograph of his toddler grandson on an iPad. “These [young] people know connectivity,” he said. “They don’t know privacy, because they’ve never had it. So we could just wait this thing out!” Everyone laughed. The crowd didn’t figure commercializing drones will take nearly that long.