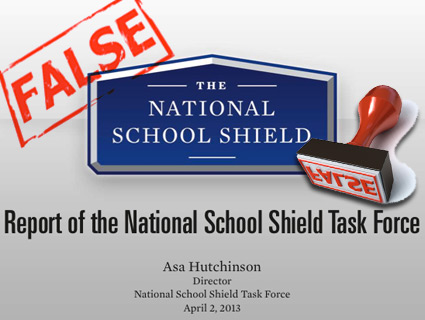 Is it a good idea to entrust the National Rifle Association with a role in shaping safety policies for schools? There are various reasons for answering that question in the negative (gun industry profits, for example) but a fresh one became evident on Tuesday when the NRA unveiled its plan for securing schools from shooters: Its strategy includes the use of phony evidence.

The centerpiece of the NRA-funded “Report of the National School Shield Task Force” is putting armed guards in America’s K-12 schools. Deep into the 225-page report, a section on securing buildings makes the case for doing away with classroom windows that may be vulnerable to armed attackers. It cites a mass murder from three years ago:

For example, in 2010 a 16-year-old attacker killed six people hiding in a locked classroom in Hastings Middle School in Minnesota by shooting and subsequently stepping through a tempered glass window that ran vertically alongside the classroom door.

Horrifying—except it never happened. Here’s what actually happened in 2010 at Hastings Middle School in Minnesota:

Brandishing a loaded handgun at teachers and students in at least two Hastings Middle School classrooms Monday, an eighth-grade student spread terror but fired no shots before being tackled and subdued by a school police officer.

“It was the closest thing to a school shooting without firing a gun,” said Michael McMenomy, Hastings police chief. “We don’t know whether he didn’t want to shoot or whether the gun jammed.”

Confronting one locked door, the student used the gun to break out a pane of glass, thrust his arm through the opening and unlocked the door. Again he pointed the gun at the class, but fled without shooting.

Fortunately, no one was injured in this frightening yet nonlethal incident. That’s a less useful story for the NRA, though, whose modus operandi is to call for more guns by appealing to fear and fantasy. It’s possible that the episode in question may have been a mix-up; its footnote cites a news story covering both the incident at Hastings Middle School and the massacre at Red Lake Senior High School five years prior, in which a teen assailant killed seven and injured five before committing suicide. But whatever the case, the bad info shows that the NRA is unreliable when it comes to assessing mass gun violence.

The task force that produced the report has the veneer of credibility, as it’s headed up by former congressman Asa Hutchinson and backed by a handful of former federal law enforcement officials. It contains sensible recommendations about training programs, building design, and preparedness. But it also uses a sleight-of-hand typical of pro-gun activists. The report’s introductory remarks float the idea, for example, that the armed security officer who was on hand at Columbine High School in 1999 helped prevent carnage:

Although the officer engaged in brief gunfire with the two murderers, which likely saved several lives, the officer remained outside the building caring for a wounded student as the killers proceeded inside.

And how do we know that the officer—who failed to stop the two suicidal murderers—”likely saved several lives”? Because, according to the report’s citation, a conservative pundit speculated that’s what happened. (There is no specific evidence to support that conclusion.)

The report also puts gloss on an intervention by an armed educator in an attack at Pearl High School in Mississippi in 1997. “In that instance,” it says, “Luke Woodham killed two students and wounded seven others at his high school before the school’s assistant principal, Joel Myrick, disarmed him using a .45-caliber semi-automatic pistol that he retrieved from his truck.” What it conveniently leaves out is that the assistant principal was also an Army reservist, and that the shooting apparently was already over by the time he acted.

There may be schools that are in need of improved security. But the NRA’s sole focus on the subject—the week before Congress reconvenes and takes up gun control legislation—is no accident. If the NRA task force had a serious interest in solving the complex problem of school shootings, it would have started by focusing on real mass shootings data. It would have noted that the actual teen killer in Minnesota used the same kind of highly lethal weapons as the killers in Blacksburg, DeKalb, Tucson, Aurora, Oak Creek, Minneapolis, Newtown, and other sites of such slaughter. And it would have noted that in the last few years those weapons have become ever easier to obtain and carry in public.

But there’s really only one serious direction the conversation can go from there, and it’s not about increasing firearms in places where kids go to learn.

On Tuesday, National Education Association president Dennis Van Roekel reiterated that educators overwhelmingly support stronger gun control laws and reject the NRA’s agenda for arming school employees. “Most Americans share these views—parents do not want their five-year-olds to have to walk past someone with a gun to reach their kindergarten class,” he said. “Mitigation and prevention, along with common sense laws to prevent gun violence, have to be a part of the plan if we are going to truly help ensure safe learning environments for the nation’s students.”

Update, April 8: In a statement released on Monday, the NRA’s task force apologized for including the phony school shooting, noting that it has since “corrected that detail in the report.”