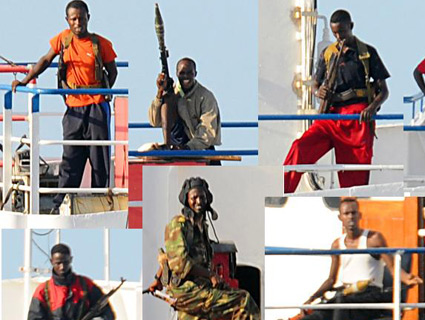 Paleoanthropologist and Berkeley professor Tim White has been waiting for years to drill into the Gulf of Aden near the Indian Ocean seabed for ancient ashes from African volcanoes. By comparing the different layers in the sea core to those found on land, he hopes to be able to estimate the age of certain fossils, thus advancing our understanding of both human evolution and climate change.

But there’s a problem: Pirates have made it too dangerous to put a boat anywhere near the ash that White needs. Somali buccaneers claimed more than 3,740 crew members from 125 countries as victims between 2005 and 2012, according to the World Bank. Globally, the economic cost of piracy comes to $18 billion per year. And now, scientific research appears to be another casualty of the marauding bandits.

“Piracy has stopped oceanographic work in the region,” White  told National Geographic this week. “There’s been no data coming out of this area for years. Zero.”

White’s research requires the use of the JOIDES Resolution, an oceanographic ship with a drilling rig. The Integrated Ocean Drilling Program (IODP), which controls the JOIDES Resolution, has docked three projects near Somalia (including White’s) due to safety concerns. “To get the kind of climate records we’re after, you need to sit on station for two days to a week,” says Sarah Feakins, an assistant professor of Earth Science at USC whose research is also being stalled. “The ship is in one place, which makes it more dangerous.”

According to National Geographic, White’s and Feakin’s frustrations are echoed by scientists worldwide:

“Scientists from around the globe, specializing in subjects as diverse as plate tectonics, plankton evolution, oceanography, and climate change, are decrying a growing void of research that has spread across hundreds of thousands of square miles of the Indian Ocean near the Horn of Africa-an immense, watery “data hole” swept clean of scientific research by the threat of Somali buccaneering.”

Back in 2011, Australian researchers interested in studying international weather patterns asked the Australian and US navies to help them fend off threats from Somali pirates. In a joint military effort, the two countries’ navies protected the researchers’ instruments.

But this kind of aid wouldn’t help with White’s sea core drilling. “You can do some science off military vessels, but for these operations you need sediment coring ships themselves,” said Feakins. An armed escort for the research vessels could work, but Feakins told National Geographic that when she suggested this idea, “it caused a firestorm of anger from everybody from the US State Department to the IODP.” Scientific groups say such efforts would hurt their insurance policies, and governments hesitate to foot the bill.

So far in 2013 there have been four pirate hijackings worldwide, down from 14 in 2012 and 31 in 2011. But despite the recent decline, scientists still don’t know when—or if—their research will be able to move forward.

“My sense is the window of opportunity may not open again for many, many years,” says White.

According to Feakins, the last time any science was done in the Gulf of Aden was in 2001. “The climate system is changing and it’s a shame not to have any information on this region,” she says.