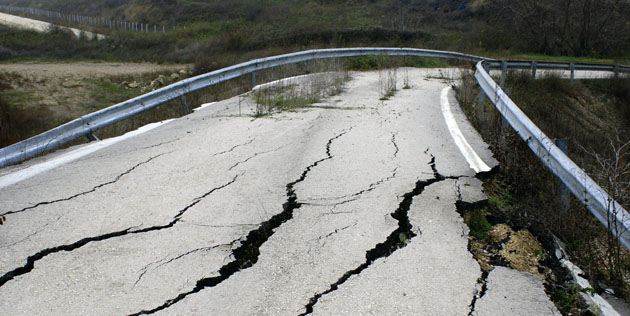 The streets are so much darker now, since money for streetlights is rarely available to municipal governments. The national parks began closing down years ago. Some are already being subdivided and sold to the highest bidder. Reports on bridges crumbling or even collapsing are commonplace. The air in city after city hangs brown and heavy (and rates of childhood asthma and other lung diseases have shot up), because funding that would allow the enforcement of clean air standards by the Environmental Protection Agency is a distant memory. Public education has been cut to the bone, making good schools a luxury and, according to the Department of Education, two of every five students won’t graduate from high school.

It’s 2023—and this is America 10 years after the first across-the-board federal budget cuts known as sequestration went into effect. They went on for a decade, making no exception for effective programs vital to America’s economic health that were already underfunded, like job training and infrastructure repairs. It wasn’t supposed to be this way.

Traveling back in time to 2013—at the moment the sequester cuts began—no one knew what their impact would be, although nearly everyone across the political spectrum agreed that it would be bad. As it happened, the first signs of the unraveling which would, a decade later, leave the United States a third-world country, could be detected surprisingly quickly, only three months after the cuts began. In that brief time, a few government agencies, like the Federal Aviation Administration (FAA), after an uproar over flight delays, requested—and won—special relief. Naturally, the Department of Defense, with a mere $568 billion to burn in its 2013 budget, also joined this elite list. On the other hand, critical spending for education, environmental protection, and scientific research was not spared, and in many communities the effect was felt remarkably soon.

Robust public investment had been a key to US prosperity in the previous century. It was then considered a basic part of the social contract as well as of Economics 101. As just about everyone knew in those days, citizens paid taxes to fund worthy initiatives that the private sector wouldn’t adequately or efficiently supply. Roadways and scientific research were examples. In the post-World War II years, the country invested great sums of money in its interstate highways and what were widely considered the best education systems in the world, while research in well-funded government labs led to inventions like the Internet. The resulting world-class infrastructure, educated workforce, and technological revolution fed a robust private sector.

In the early years of the twenty-first century, however, a set of manufactured arguments for “austerity,” which had been gaining traction for decades, captured the national imagination. In 2011-2012, a Congress that seemed capable of doing little else passed trillions of dollars of what was then called “deficit reduction.” Sequestration was a strange and special case of this particular disease. These across-the-board cuts, instituted in August 2011 and set to kick in on January 2, 2013, were meant to be a storm cloud hanging over Congress. Sequestration was never intended to take effect, but only to force lawmakers to listen to reason—to craft a less terrible plan to reduce deficits by a wholly arbitrary $1.2 trillion over 10 years. As is now common knowledge, they didn’t come to their senses and sequestration did go into effect. Then, although Congress could have cancelled the cuts at any moment, the country never turned back.

It wasn’t that cutting federal spending at those levels would necessarily have been devastating in 2013, though in an already weakened economy any cutbacks would have hurt. Rather, sequestration proved particularly corrosive from the start because all types of public spending—from grants for renewable energy research and disadvantaged public schools to HIV testing—were to be gutted equally, as if all of it were just fat to be trimmed. Even monitoring systems for possible natural disasters like river flooding or an imminent volcanic eruption began to be shut down. Over time the cuts would be vast: $85 billion in the first year and $110 billion in each year after that, for more than $1 trillion in cuts over a decade on top of other reductions already in place.

Once lawmakers wrote sequestration into law they had more than a year to wise up. Yet they did nothing to draft an alternate plan and didn’t even start pointing out the havoc-to-come until just weeks before the deadline. Then they gave themselves a couple more months—until March 1, 2013—to work out a deal, which they didn’t. All this is, of course, ancient history, but even a decade later, the record of folly is worth reviewing.

If you remember, they tweeted while Rome burned. Speaker of the House John Boehner, for instance, sent out dozens of tweets to say Democrats were responsible: “The president proposed sequester, had 18 mo. to prioritize cuts, and did nothing,” he typically wrote, while he no less typically did nothing. For his part, Senate Majority Leader Harry Reid tweeted back: “It’s not too late to avert the damaging #sequester cuts, for which an overwhelming majority of Republicans voted.” And that became the pattern for a decade of American political gridlock, still not broken today.

March 1st came and went, so the budgetary axe began to fall.

At first, it didn’t seem so bad. Yes, the cuts weren’t quite as across the board as expected. The meat industry, for example, protested because health inspector furloughs would slow its production lines, so Congress patched the problem and spared those inspectors. But meat production aside, there was a sense that the cuts might not be so bad after all.

They were to be doled out based on a formula for meeting the arbitrary target of $85 billion in reductions in 2013, and no one knew precisely what would happen to any given program. In April, more than a month after the cuts had begun, the White House issued the president’s budget proposal for the following year, an annual milestone that typically included detailed information about federal spending in the current year. But across thousands of pages of documents and tables, the new budget ignored sequestration, and so reported meaningless 2013 numbers, because even the White House couldn’t say exactly what impact these cuts would have on programs and public investment across the country.

As it happened, they didn’t have to wait long to find out. The first ripples of impact began to spread quickly indeed. Losing some government funding, cancer clinics in New Mexico and Connecticut turned away patients. In Kentucky, Oregon, and Montana, shelters for victims of domestic violence cut services. In New York, Maryland, and Alabama, public defenders were furloughed, limiting access to justice for low-income people. In Illinois and Minnesota, public school teachers were laid off. In Florida, Michigan, and Mississippi, Head Start shortened the school year, while in Kansas and Indiana, some low-income children simply lost access to the program entirely. In Alaska, a substance abuse clinic shut down. Across the country, Meals on Wheels cut four million meals for seniors in need.

Only when the FAA imposed furloughs on its air traffic controllers did public irritation threaten to boil over. Long lines and airport delays ensued, and people were angry. And not just any people—people who had access to members of Congress. In a Washington that has gridlocked the most routine business, lawmakers moved at a breakneck pace, taking just five days to pass special legislation to solve the problem. To avoid furloughs and shorten waits for airline passengers, they allowed the FAA to spend funds that had been intended for long-term airport repairs and improvements.

Flights would leave on time—at least until runways cracked and crumbled. (You undoubtedly remember the scandal of 2019 at Cincinnati International Airport, when a bright young candidate for Senate met her demise in a tragic landing mishap.)

And then, of course, the Pentagon asked for an exemption, too. We’re talking about the military behemoth of planet Earth, which in 2013 accounted for 40% of military spending globally, its outlays exceeding the next 10 largest militaries combined. It, too wanted a special exemption for some of its share of the cutbacks.

Meat inspectors, the FAA, and the Department of Defense enjoyed special treatment, but the rest of the nation was, as the history books recount, not so lucky. Children from middle-class and low-income families saw ever fewer resources at school, closing doors of opportunity. The young, old, and infirm found themselves with dwindling access to basic resources such as health care or even a hot dinner. Federal grants to the states dried up, and there was less money in state budgets for local priorities, from police officers to lowly streetlights.

And remember that, just as the sequestration cuts began, carbon concentration in the atmosphere breached 400 parts per million. (Climate scientists had long been warning that the level should be kept below 350 for human security.) Unfortunately, as with the groundbreaking research that led to the Internet, it takes money to do big things, and the long-term effects of cutting environmental protection, general research, and basic infrastructure meant that the US government would do little to stem the extreme weather that has, in 2023, become such a part of our world and our lives.

Looking back from a country now eternally in crisis, it’s clear that a Rubicon was crossed back in 2013. There was then still a chance to reject across-the-board budget cuts that would undermine a nation built on sound public investment and shared prosperity. At that crossroads, some fought against austerity. Losing that battle, others argued for a smarter approach: close tax loopholes to raise new revenue, or reduce waste in health care, or place a tax on carbon, or cut excessive spending at the Pentagon. But too few Americans—with too little influence—spoke up, and Washington didn’t listen. The rest of the story, as you well know, is history.

Mattea Kramer is Research Director at National Priorities Project, where Jo Comerford is Executive Director. Both are TomDispatch regulars. They wrote A People’s Guide to the Federal Budget.

Follow TomDispatch on Twitter and join us on Facebook or Tumblr. Check out the newest Dispatch book, Nick Turse’s The Changing Face of Empire: Special Ops, Drones, Proxy Fighters, Secret Bases, and Cyberwarfare.To stay on top of important articles like these, sign up to receive the latest updates from TomDispatch.com here.