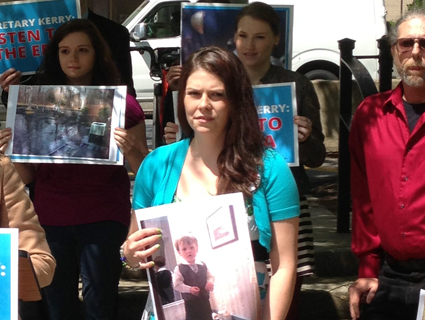 Genieve Long holds a photo of her son at a rally outside the State Department on Thursday. Image courtesy of the Remember Mayflower Coalition.

Two residents of Mayflower, Arkansas, the site of the March 29 pipeline spill, traveled to Washington on Thursday to ask Secretary of State John Kerry to reject the Keystone XL pipeline.

They came here, Genieve Long said, to ask Kerry to “come to our state to see the devastation and hopefully get the Keystone XL stopped.” They are working with All Risk, No Reward, a coalition of local and national groups that oppose the proposed 1,600-mile pipeline that would carry oil from Canada to Texas.

“I’m just a concerned single daddy who happens to have 400 feet of this pipeline running through his property.”

Long and her four children—ages 9, 8, 7, and 5—live beside Lake Conway, not far from where Exxon’s Pegasus pipeline spilled at least 210,000 gallons of crude oil from Canada’s tar sands into a subdivision. Exxon has said that while there is oil in a cove on the lake, clean up crews haven’t seen oil in the main body of water. But Sierra Club has said that an independent contractor the group hired found evidence of oil in the lake. Long thumbed through photos on her phone on Thursday morning, showing me images of oily sheen and what appeared to be black residue along the shores.

She says that Exxon has not been responsive to the complaints of people who live outside the area where the oil originally spilled. “I’ve asked them to just relocate us due to the smells,” she said, noting that several of her children have asthma. “They told us the air quality was fine and they wouldn’t relocate us.” She’s maintaining a Google Map that catalogs where people have reported seeing or smelling oil or experiencing negative health effects, as well as photos and video. She’s also maintaining a Facebook page on the spill. 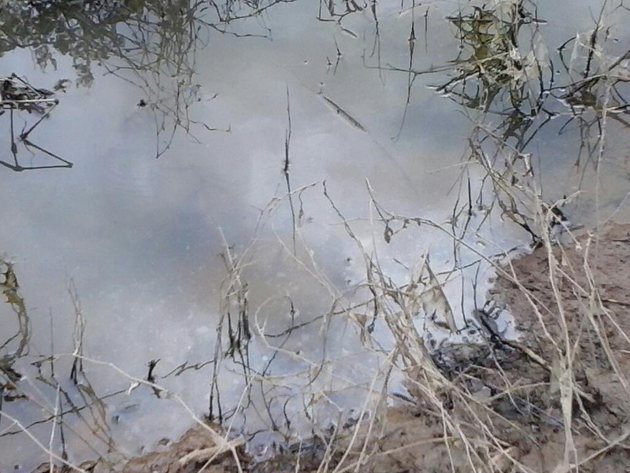 The oil is bad, but so is the cleanup, she says. “It’s horrible. They have roads blocked down to one lane, constant police, constant traffic.”

She was joined in Washington by fellow Mayflower resident Damien Byers, whose house is about a half a mile from the spill site and sits atop another portion of the Pegasus pipeline. He worries about the air quality in the area, especially when his 15-month-old son is staying with him. “I’m not an environmentalist, I’m not a treehugger,” says Byers. “I’m just a concerned single daddy who happens to have 400 feet of this pipeline running through his property.”

The pair delivered a letter to the State Department from a group of 21 residents of the town who have organized as the “Remember Mayflower Coalition.” The letter asks Secretary Kerry to reject the Keystone pipeline—particularly in light of the Arkansas spill:

There is still so much we don’t know about tar sands—about the economic risks of them spilling in communities, about how they impact important water sources, and about how they effect our health. We don’t know enough to say “yes” to a massive tar sands pipeline through the country’s heartland.

Before you issue your final evaluation of Keystone XL, we ask that you and your staff come to Mayflower to see what happens when a tar sands pipeline ruptures in your backyard. We ask that you observe the remnants of black tar, smell the toxic chemicals that are polluting our air, and ask yourselves whether you can in good conscience inflict this same devastation on families along Keystone XL’s route.

“If this can happen to Mayflower,” Long said, “with this Keystone pipeline, it can happen to anybody else also. We’re trying to keep that from happening.”