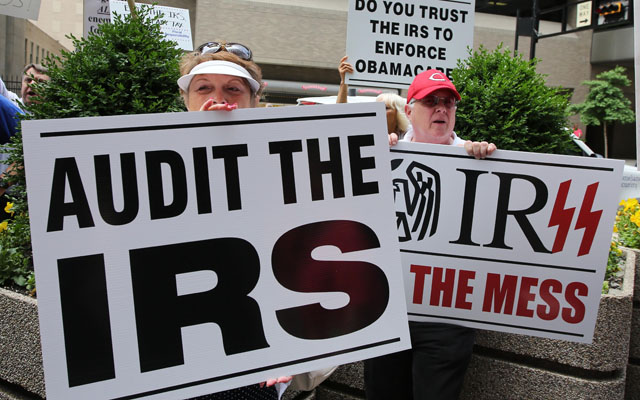 Tea party members protest in front of the John Weld Peck Federal Building in Cincinnati, Ohio, during a nationwide protest at IRS offices on May 21, 2013.Ernest Coleman/ZUMAPRESS.com

You’d have to search long and hard to find a member of Congress not outraged that politics and partisanship crept into the work of the IRS, leading to the wrongful targeting of tea partiers and other conservative groups seeking tax-exempt status. “The American people have a right to expect that the IRS will exercise its authority in a neutral, nonbiased way,” Sen. Orrin Hatch (R-Utah) said on Tuesday. “Sadly, there appears to have been more than a hint of political bias” by the IRS staffers vetting nonprofit applications. Hatch’s Republican colleagues in the House and Senate could hardly contain their anger. “Do either of you feel any responsibility or remorse for treating the American people this way?” Sen. Chuck Grassley (R-Iowa) asked the former IRS chiefs Douglas Shulman and Steven Miller on Tuesday.

Yet lawmakers have no qualms with using politics to bend the IRS to its will. In 2011, under pressure from House and Senate Republicans, Miller, then the IRS’s deputy commissioner, spiked audits investigating whether five big donors to 501(c)(4) groups—the type of nonprofit that can get involved in campaigns and elections but can’t make politics its “primary activity”—avoided paying taxes on their donations. It’s not known which party any of these donors favored, but suffice it to say that Miller’s decision erased any worry that wealthy political patrons might have had about giving millions to politically active nonprofits during the 2012 campaign season.

For some tax lawyers, it was a surprising move that raised red flags. “They were stopped mid-audit, which is an extraordinary move,” says Marcus Owens, a tax lawyer who ran the IRS division that oversees politically active nonprofits for 10 years. “I’ve been practicing tax law for close to 40 years, and I’ve never seen that. To have Miller reach out and stop those audits, that’s something that really deserves an inquiry.”

The identities of the donors and nonprofits being scrutinized were never revealed. Owens says he suspects most, if not all, of the five had contributed to Republican groups because GOP lawmakers were the ones raising a ruckus on Capitol Hill. Greg Colvin, a San Francisco-based attorney who represented one of the donors, declined to give any details about his client and the donation under review.

The tax matter at issue was whether these donors had sidestepped the gift tax. Created in 1924, the gift tax acts as a safeguard of sorts, backstopping both the estate tax and the income tax. Before its creation, people could donate all their money before they died to avoid the estate tax or give away their assets to relatives in lower income tax brackets. The gift tax does not apply to donations to traditional charities (the Red Cross), trade groups (the US Chamber of Commerce), or political nonprofits formed under the 527 section of the tax code (Swift Boat Veterans for Truth and America Coming Together). In the 1980s, the IRS said that the gift tax did cover contributions to 501(c)(4)s, yet for decades the agency never bothered donors about the gift tax on their donations to such nonprofits.

“The deputy commissioner’s office does not normally step in to stop audits. It’s getting too close to politics at that point.”

That changed in early 2011, when the IRS told five big donors to 501(c)(4) groups that they were being investigated for possibly dodging the gift tax. One of these letters read, “Donations to 501(c)(4) organizations are taxable gifts and your contribution in 2008 should have been reported on your 2008 Federal Gift Tax Return.” That was a potentially a big deal. The way the gift tax works, a donor who in 2008 gave more than $2 million to one or more nonprofits could owe hundreds of thousands of dollars to the taxman—a doozy of an unexpected tax bill. If the IRS vigorously applied the gift tax to these sort of donations, donors would be less likely to give (or would give less) to nonprofits, tax experts say.

In May 2011, news of the IRS’s big-donor probe went public. Republicans reacted furiously. On June 3, 2011, Rep. Dave Camp (R-Mich.), the chairman of the House ways and means committee, sent a letter to then-IRS commissioner Doug Shulman demanding the names and titles of IRS staffers involved in the gift tax probe, and the criteria used to pick which donors to scrutinize. “Every aspect of this tax investigation, from the timing to the sudden reversal of nearly thirty years of IRS practice, strongly suggests that the IRS is targeting constitutionally-protected political speech,” Camp said. (The IRS denied that the probe was influenced by politics in any way.)

The following month, Miller halted the agency’s donor audits. In a public memo, he wrote, “This is a difficult area with significant legal, administrative, and policy implications with respect to which we have little enforcement history.” The IRS would study the gift tax, Miller added, and if it launched future audits of donors, it would do so only after alerting the public.

If nonprofit donors had once worried about getting slapped with a big tax bill, Miller’s memo eased those fears—just in time for the 2012 campaign season, in which politically active nonprofits raised and spent hundreds of millions of dollars. Miller’s memo “gave donors a green light” to finance 501(c)(4)s, Colvin says. “Ever since then donors have been able to give to (c)(4) organizations who may or may not be active in politics.”

Miller, who lost his job in the latest IRS scandal, was not a political appointee, unlike Shulman, who was named to his post by President George W. Bush. (The staffers who launched the short-lived gift tax probes weren’t political appointees, either.) Yet Marcus Owens, the former IRS director, says Miller’s decision to stop the audits smacked of politics after receiving so much pressure from Congress. “The deputy commissioner’s office does not normally step in to stop audits,” he says. “It’s getting too close to politics at that point.”

Colvin says that Miller and the IRS did the right thing by stopping the donor audits, which had little precedent. “I thought that was a pretty good example of a situation that had the potential to be a scandal and it turned out to be much better managed than this latest thing,” Colvin says.

But all the tax experts tend to agree that the gift tax law, like the rules and guidelines for politically active nonprofits, badly needs fixing. The gift tax is so murky, Colvin says, that some of his clients proactively have paid millions in taxes to avoid the slim chance of an IRS audit. Yet other donors don’t sweat it and pay no gift taxes at all. Ellen Aprill, a Loyola Law School professor, says, “If you’re trying to reform 501(c)(4) groups, you should try to address the uncertainty about the gift tax too.”

As for Republicans in Congress, they seem to want it both ways: hammering IRS officials for letting partisanship influence their agency’s work, yet at the same time applying all the political pressure they can muster to get what they want.