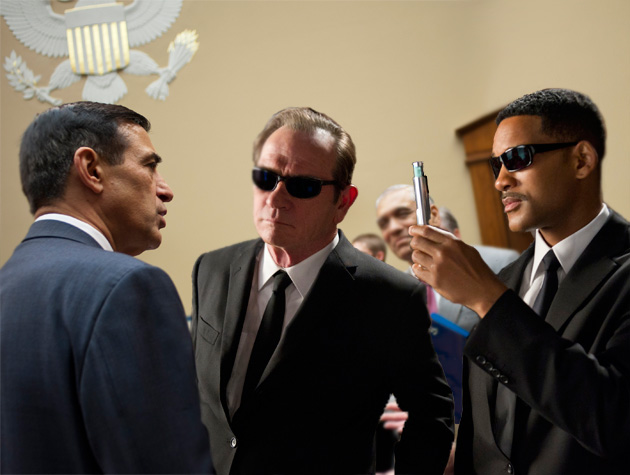 The source of his ire is a stack of newspaper clippings about 20 feet away from where he’s standing in the wood-paneled ballroom of National Press Club in downtown DC. For the last three days, Bartlett and five other retired members of Congress have been holding hearings on the “truth embargo”—that is, the government’s decades-long silence on unidentified flying objects. Next to the empty bottle of Honest Tea orange–mango Honest Ade, which he has been drinking out of a wine glass, Bartlett has a pile of stories from mainstream news sources that have dismissed the privately organized hearings. On top is a New York Daily News story featuring a photo of a woman with a headband featuring a “third eye” that, she maintains, allows her to contact beings in other dimensions. (It includes this caption: “Ex-Rep. Roscoe Bartlett (center) and ex-Sen. Mike Gravel (right) listen to testimony without cracking a smile.”)

The hearings are being sponsored by the Paradigm Research Group, the nation’s only organization dedicated to lobbying Washington on UFO disclosure. Its president, Stephen Bassett, is a full-time lobbyist on this front.

(MoJo readers might remember Bassett for his theory that alien technology recovered at Roswell holds the secret to stopping climate change, and for his endorsement of the Exopolitics Institute, which contends that the Iraq War was a ruse to recover an ancient interstellar portal that had been buried in Mesopotamia.)

Bassett doesn’t have much influence in Congress, but his organization apparently does have some money. The former members will receive $20,000 apiece for five days work.

“It helped,” Woolsey says, of the honorarium. “It was nice, and I think…let’s put it that way.” As she puts maintains, it’s standard operating procedure for retired politicians to make money on the speaking circuit; learning about UFOs is kind of like getting paid to speak to a trade association. Cook says the money was a big part of Bassett’s pitch, but it’s not why he’s here. “Even though the fee was offered up first thing, that still didn’t convince me,” the barrel-chested former talk radio host says. “It really didn’t.” Kilpatrick called the honorarium “minuscule,” adding, “And I’m appalled that someone would even raise that.” Bartlett is likewise appalled that anyone would associate his participation in the hearings with the appearance fee. “It’s an insult to infer that that’s why I’m here.” Hooley insists she’s actually losing money by taking a week off from her consulting firm.

The assembled members are an eclectic ensemble of ex-members of Congress. Woolsey was the chair of the House Progressive Caucus, and represented Marin County. Kilpatrick is the mother of disgraced former Detroit Mayor Kwame Kilpatrick. Gravel briefly sought the 2008 Democratic presidential nomination, during which time he filmed a quixotic video (federal law requires journalists to use the word “quixotic” when describing Gravel’s run) in which he tossed a medium-sized rock into a pond and walked away. Bartlett appeared in a 2011 survivalist documentary where he showed off his root cellar and collection of canned vegetables.

When I meet Cook, who served in the House from 1997 to 2001 and now works in the mining industry, he is otherwise occupied talking to a woman in jeans and brown boots with a hand-held Canon camera who says she’s spoken to whistleblowers about the government cover-up on extraterrestrials.

This, it turns out, has real policy implications. “They know visitors to this planet might not be friendly,” she says of the whistleblowers—which “means Star Wars [the missile defense program] might just be a good idea.” Cook is less sure. But, he tells her, “UFOs are real. Exactly what their origin is, is unclear.”

What follows is a rush transcript of the ensuing exchange:

—Are you aware of bases? Underground bases?

—I’ll go as far as underground cities, are you familiar with that?

—Are you aware of the Venture Star?

—The Venture Star is off-planet. The US is interstellar. Does that blow your mind?

—[Stammers.] I’m approaching everything with an open mind.

Cook has been getting a lot of this at the hearings. But he was sufficiently affected by the Tuesday testimony of Air Force veterans who claim the Department of Defense is illegally refusing to release their medical records that he called up his lawyer during the lunch break to ask about it.

“This made me feel like I wasn’t wasting my time,” Cook says. “Because there were some things I saw yesterday, I’ll be honest…” (“Yesterday” = headbands.)

And that, ultimately, gets at Bassett’s more legitimate point, one he’s hoping members of Congress and the assembled media might be able to separate from the talk of alternative dimensions and Independence Day scenarios. His major goal is disclosure (Paradigm’s motto: “It’s no longer about lights in the sky; it’s about lies on the ground”) with an emphasis on old Department of Defense personnel records and documents that might lend some clarity to reported UFO sightings. As it happens, the federal government is notoriously pretty bad at disclosure. This is, after all, the same administration that refused to so much as disclose the number of classified opinions the Office of Legal Counsel has administered since 2009, let alone their contents.

Bartlett, at least, has taken it to heart.

“They need to hold hearings,” he said. Real hearings, that is, with real members of Congress, and probably fewer people with headbands. “I think the logical place to start is Darrell Issa’s committee.”