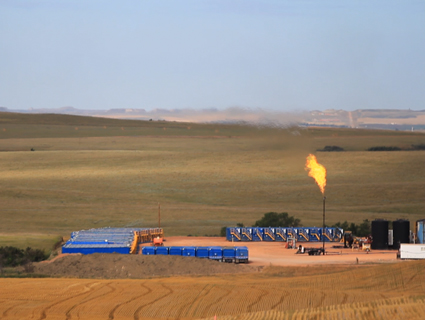 Excess gas flares off at a well site outside Williston. James West/Climate Desk

At 7:00 am local time this morning, Lonnie’s Roadhouse Cafe in Willison, North Dakota, was already bustling, packed to the gills with truckers and roughnecks tanking up on coffee and omelettes for another day in that town’s ongoing fracking boom.

It’s become a typical scene here in the last several years, as new drilling technology has unleashed massive deposits of oil from the Bakken Shale, in the process slashing unemployment to the lowest anywhere in the nation, minting a new class of oil wealth, and generally upending what was once a backwater prairie town—turmoil Climate Desk witnessed first-hand last year (see video below). And it looks like that growth is here for the long haul: A new analysis out yesterday from the US Geological Survey doubled previous estimates of how much oil is in reserve under North Dakota, up to 7.4 billion barrels, which would make it the largest oil field in the country.

The new numbers come as no surprise to the fossil fuel titans behind the boom: Back in 2011, fracking kingpin Harold Hamm said he thought the Bakken will ultimately churn out 24 billion barrels. While the new federal analysis doesn’t go quite that far, it does confirm that places like Lonnie’s are likely to be jam-packed for the forseeable future. The exact expiration date of the boom remains unclear: Local officials are hesitant to pin it down, and estimates made before yesterday’s analysis range from 20 to 100 years, depending on technological advances, future oil prices, and the level of private investment. But the USGS report could help clear that up: Sen. John Hoeven (R-N.D.) requested the update in 2011 precisely to boost confidence in the corporations slinging up hotels, restaurants, and other services for the surging worker population.

The last time USGS took a crack at guessing what the Bakken might hold was in 2008; the upward revision since then comes mainly as a product of the learning process that happens when developers start to drill. As more wells go in and more oil comes out, geologists can refine their sense of what lies in store, said Jim Ladlee, associate director of Penn State University’s Marcellus Center, which tracks the fracking revolution nationwide.

“The technology is always evolving,” he said, “there’s constant change and constant evolution going on.”

At the same time, the new estimate takes into account for the first time the Three Forks Formation, a nearby oil deposit that was previously—incorrectly—thought to be unproductive. It also nearly triples previous assumptions about natural gas reserves.

“These world-class formations contain even more energy resource potential than previously understood, which is important information as we continue to reduce our nation’s dependence on foreign sources of oil,” Secretary of the Interior Sally Jewell said in a statement.

Still, Ladlee said that even this higher estimate is likely too low.

“Production estimates tend to go up as they drill more holes,” he said.

More oil in the ground means more of the growing pains Williston has gone through recently: crumbling roads, overcrowded hotels, and injured workers crowding understaffed local hospitals, to name a few. For Lonnie, it’s worth it.

“The traffic sucks sometimes,” she says. “With all the good you get the bad. But I like it.”