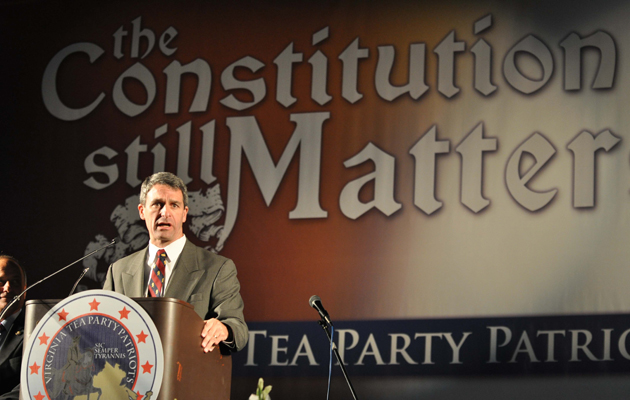 Controversial Virginia Republican lieutenant governor candidate E.W. Jackson, as I reported last week, began his career as a social conservative crusader as an anti-anti-AIDS activist in Boston, where he fought against public health initiatives that promoted condom use and sterilized needles. And Jackson’s extreme views on such issues as LGBT rights (“If we need a gay rights bill, then we need an adulterers’ rights bill, we need a cohabitators’ rights bill, a pedophiles’ rights bill, and a sadomasochists’ rights bill”) and Islam (he’s against it) have launched a flurry of stories on the potential impact of Jackson’s extremism on Ken Cuccinelli, the Republican running for governor. Cuccinelli has tried to distance himself from Jackson, but he has a problem: his own past as a social conservative activist is not that different from Jackson’s.

In 2005, for example, Cuccinelli, then a state senator, sent a volunteer to investigate a mostly-female planning meeting for an event to be held at George Mason University by “Pro-Choice Patriots,” a student group, and dubbed the “Sextravaganza.” This gathering was designed to promote healthy sexual activity—dispensing information on date rape, AIDS, and contraception. But Cuccinelli condemned the plan to hold such an event at a public school, warning that “Sextravaganza” would promote “every type of sexual promiscuity you can imagine.”

“This whole thing is really just designed to push sex and sexual libertine behavior as far, fast and furiously as possible,” he told the Washington Post at the time, adding, “Do we need to establish some statewide standards here? It’s pathetic we even need to have this discussion, but apparently we do.”

Cuccinelli, like Jackson, was a fierce fighter for what they called traditional family values. In 2004, the Washington Times reported that Cuccinelli was leading the fight against, in his words, “homosexuals and AIDS [education].” He was doing so by pushing a resolution asking Congress to pass a constitutional amendment defining marriage as between a man and a woman:

“[The resolution would] enshrine in the Constitution effectively what is Virginia law today, and that is that marriage is between one man and one woman and that there are no analogous relationships under law,” said Kenneth T. Cuccinelli II, Fairfax County Republican and the bill’s sponsor.

Mr. Cuccinelli and others worry recent protests on the topic are part of an overall strategy by homosexuals, who he thinks plan to “dismantle sodomy laws” and “get education about homosexuals and AIDS in public schools.” On Friday in a 79-18 vote, the House passed a bill that affirms the state’s ban on homosexual “marriage.” It is expected to pass the Senate.

Cuccinelli may find it tough to separate himself from Jackson, given that the two were both fierce leaders in the culture war fights of the 1990s and 2000s.