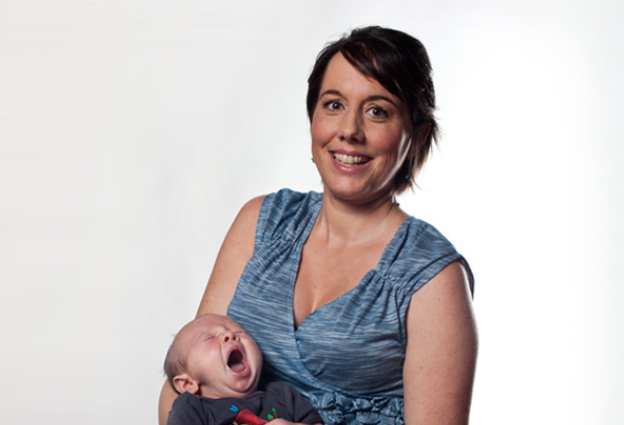 Courtney Kaplan, a 42-year-old mother living in Oakland, California, knew from experience that the first couple of years after having a baby can be “rough.” So when she had her second child in late April, she wanted to make sure that she had enough time to physically recover from birth, adjust to a brand new family member, and find the right child care.

Her husband, a paramedic, faced a benefits landscape familiar to many stretched American families. He took vacation time, plans to swap shifts with coworkers to get time off, and will make do with the six weeks of partial paid leave required by the state of California.

But Kaplan was recently hired to do product design for Facebook, a company that has one of the best maternity leave policies in Silicon Valley. She has four months of paid leave and access to a host of other benefits, like $4,000 in baby cash and subsidized day care. “Facebook’s leave policy is generous and definitely made me feel good about joining the company,” Kaplan says. “I don’t feel pressured to return sooner and everyone has been really supportive.”

America remains one of the few countries in the world without mandatory paid leave for new parents, but tech giants are jostling to attract and keep the best talent, triggering a benefits arms race in Silicon Valley that has led to longer leave, cheaper child care, and perks like onsite doctors and dry cleaning. Even though millions of parents nationwide work at companies that don’t offer any compensated time off, experts predict that the incentives offered by big tech companies will likely remain confined to that industry, and are unlikely to pressure other kinds of businesses to beef up their benefits.

The eight tech companies that Mother Jones contacted offer an average of about three and a half months of paid maternity leave, and 10 weeks of paid leave for a new parent that doesn’t give birth—like dads and parents who adopt or use a surrogate. Facebook, Instagram (which was acquired by Facebook last year), and Reddit have the longest leave policies, clocking in at four months of paid leave for all parents. Google offers 18 to 22 weeks of leave for birth moms, depending on whether or not a mom has complications or surgery, and seven weeks for parents who don’t give birth. 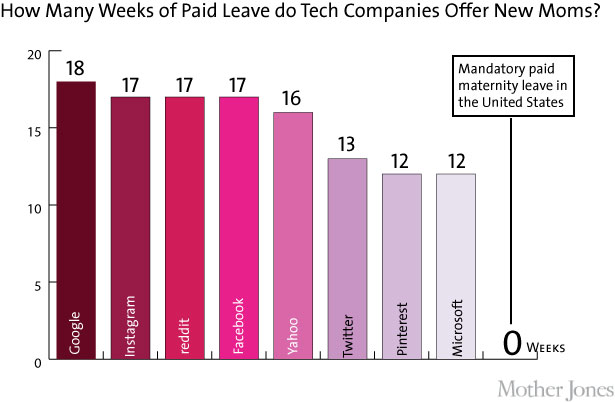 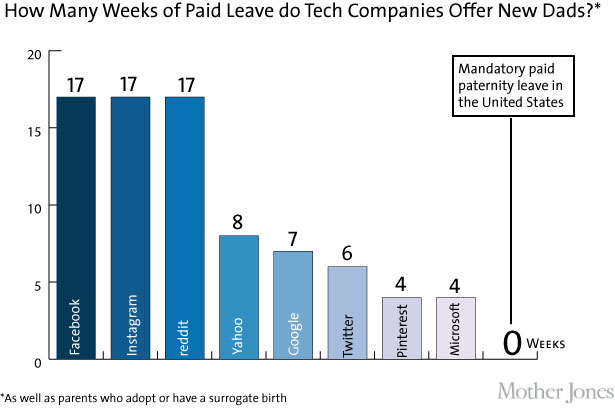 Fatima Goss Graves, vice president for education and employment at the National Women’s Law Center, says “there is no question that” the tech industry’s generous emerging standard “is more comprehensive than what most US companies offer.”

“I think tech companies are known for having comprehensive benefits and do so as a strategy to attract and retain top talent. That’s smart,” she adds. “It improves workplace retention for new parents.”

Many of the companies Mother Jones spoke with say they’re already plotting how to make their benefits better—and one-up the competition. Yahoo CEO Marissa Mayer extended the company’s paid parental leave last month, after facing public scrutiny over her decision to ban telecommuting. Pinterest initially had “very minimal benefits” but announced an expanded package in the fall of 2012, according to spokeswoman Mithya Srinivasan. Pinterest is now “thinking about meal deliveries and other ways to show how much we value our employees,” she says.

When Reddit was a division of Condé Nast, the media conglomerate that owns magazines like Vogue, The New Yorker, and Vanity Fair, it didn’t have any parental leave policy, according to Reddit CEO Yishan Wong. After it spun off as an independent subsidiary in 2011, he says, “We simply implemented our benefits structure…in according to how we felt was right in our tech startup industry.” Mother Jones asked Condé Nast if it provides paid parental leave or benefits for its employees, and spokeswoman Patricia Rockenwagner declined to “comment on details about our internal policies.”

The United States is one of very few countries around the world that doesn’t legally mandate paid parental leave, holding company with Swaziland, Papua New Guinea, Lesotho, a handful of island nations, and Suriname—the smallest sovereign nation in South America.

According to the National Partnership for Women and Families (NPWF), only 11 percent of US workers have access to paid parental leave, leaving the rest to rely on some combination of vacation days, sick and disability leave, and employer sympathy. The Families and Work Institute also finds that fully paid maternity leave programs are becoming scarcer: In 2005, 17 percent of employers offered new mothers paid time off; by 2012, the number was just 9 percent.

The 20-year-old Family and Medical Leave Act guarantees 12 weeks of unpaid leave after the birth or adoption of a child, but many US employees are not covered, including recent hires, part-time workers, or employees of small businesses. Add up the exemptions, and Vicki Shabo, director of work and family programs at the NPWF?, estimates that 40 percent of the workforce isn’t covered by even the Family and Medical Leave Act’s basic requirements for unpaid leave. She says those parents are more likely to be less educated, low-income, or blue-collar workers: “It’s these folks that need the protection provided by a federal policy.” NPWF would like to see a federal law, funded by a payroll tax, that would mandate some paid leave for workers, modeled after state programs in California and New Jersey. The organization is currently working with Rep. Rosa DeLauro (D-Conn.) to craft a bill that would provide parents with 66 percent of their wages for a leave period of up to 12 weeks.

Goss Graves of the National Women’s Law Center says it’s possible that tech companies could ultimately influence other industries who are directly competing for the same kinds of employees, but notes that “we still have a long way to go in many places. Some workers lack basic paid sick days.” Wong, the Reddit CEO, also says that not all of Silicon Valley can jump on the benefits band wagon—or even wants to: “When you’re a very small company, you often don’t have the time or money to be able to implement a full benefits program,” he says. “Also, some—many—tech companies are run by single young men, so it doesn’t occur to them to offer progressive maternity leave policies.”

Absent a federal law mandating paid leave, Kaplan, the new mom working at Facebook, notes there are still ways for small companies to support parents. Her previous employer, Hot Studio, which was acquired by Facebook in March, was much smaller than the social-media titan, but still gave employees six weeks of paid leave, in addition to the six weeks mandated by California law. They also offered a program called “Babies at Work,” which allowed moms like Kaplan to bring their infants to the office, and providing a separate, soundproof space for when the babies got fussy or if parents needed privacy.

“Smaller companies may not be able to offer the financial benefits of a large company but can try nontraditional benefits,” she says. “I’m excited to see some companies offer better leave choices and better benefits for families—for mothers and fathers. I hope they set an example for more companies to up their game.”