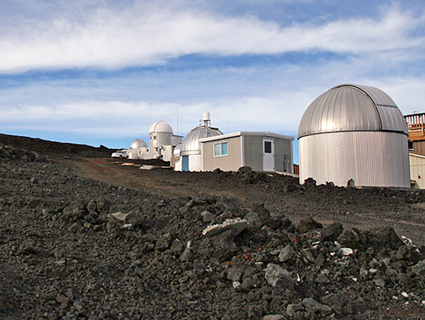 Over the last couple weeks, scientists and environmentalists have been keeping a particularly close eye on the Hawaii-based monitoring station that tracks how much carbon dioxide is in the atmosphere, as the count tiptoed closer to a record-smashing 400 parts per million. Yesterday, we finally got there: The daily mean concentration was higher than at any time in human history, NOAA reported today.

Don’t worry: The earth is not about to go up in a ball of flame. The 400 ppm mark is only a milestone, 50 ppm over what legendary NASA scientist James Hansen has since 1988 called the safe zone for avoiding the worst impacts of climate change, and yet only halfway to what the IPCC predicts we’ll reach by the end of the century.

“Somehow in the last 50 ppm we melted the Arctic,” said environmentalist and founder of activist group 350.org Bill McKibben, who called today’s news a “grim but predictable milestone” and has long used the symbolic number as a rallying call for climate action. “We’ll see what happens in the next 50.”

We could find out soon enough: With the East Coast still recovering from Superstorm Sandy and the West gearing up for what promises to be a nasty fire season, University of California ecologist Max Moritz says milestones like these are “an excuse for us to take a good hard look at where we are,” especially as the carbon concentration shows no signs of reversing course.

Scientists first saw the carbon scale tip past 400 ppm last summer, but only briefly; the record reported today by NOAA is the first time a daily average has surpassed that point. For the last several years concentrations have hovered in the 390s, and we’re still not to the point where the carbon concentration will stay above the 400 ppm threshold permanently. But that’s just around the corner, said J. Marshall Shepherd, president of the American Meteorological Society.

“It’s clear that sometime next year we’ll see 400 consistently,” he said. “Avoiding the future warming will require a large and rapid reduction in greenhouse gases.”

Most scientists, environmentalists, and climate-conscious policymakers agree this will require, at a minimum, slashing the use of fossil fuels, and in the meantime, taking steps to adapt for a world with higher temperatures, higher seas, and more extreme weather. For example, according to Hansen, the world will need to completely stop burning coal by 2030 if returning to 350 ppm is to remain possible. What’s the holdup? Texas Tech climatologist Katherine Hayhoe blames “the inertia of our economic system, and the inertia of our political system.” But she, like most of her peers, believe it can—and must—be done: “We have to change how we get our energy and how we use our energy.”

Some progress is being made on that front: Thanks to energy efficiency gains, increased use of renewable power, and policies to cut emissions from cars and power plants, carbon emissions in the US have fallen 13 percent in the last seven years. But they’re expected to begin climbing again soon, and worldwide, 2012 saw the most carbon emissions ever. Today’s milestone underscores the reality that if we’re serious about addressing climate change, there’s still a long road ahead.

“So far we have failed miserably in tackling this problem,” NOAA scientist Pieter Tans, who oversees the monitoring program, told the Times.

For McKibben, the real date to mark in the history books has yet to arrive: “I don’t think this will be the turning point. The turning point will be when we do something about it.”