Earlier this month, the Pew Research Center published results of a public survey of gay tolerance in 39 countries worldwide. The numbers are fairly unsurprising: While a high proportion of respondents in Western Europe and North America answered “yes” to the question “Should society accept homosexuality?” few respondents in the Middle East and Africa agreed with them. 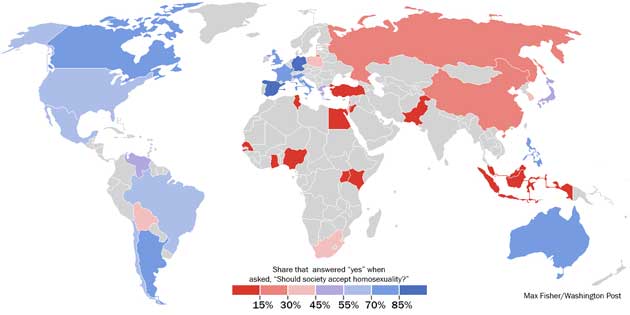 Among the least tolerant nations surveyed was Pakistan, where only 2 percent of those surveyed said society should accept homosexuality. That statistic might be unsurprising, considering that gay sex is illegal under the Pakistani penal code. But what is surprising is how those views compare to Pakistani search traffic around gay-porn-related terms.

In its report, Pew noted that countries exhibiting the highest levels of gay tolerance are largely secular, whereas nations where religion is central to public life—such as Egypt, Nigeria, and Pakistan—tend to reject homosexuality. But in Pakistan, what’s even more peculiar is that the highest number of hits for some of these terms, including “shemale sex,” come not from Pakistan’s cosmopolitan centers, but from Peshawar, a bastion of conservative Islam, lately known in the West as a counterterrorism frontline.

“The real love they can have that most of us find with a partner, they find with men,” Ispahani says. “They mostly see their wives as the mother of their children.”

At the same time, she says, persecution of minorities, including gays, has reached an all-time high in Pakistan, and discussing homosexuality openly in public is virtually forbidden. “Religious extremism is at a height today,” she says. “Hindus are being forced to convert, Christians are being burned alive—there’s very little personal safety for those seen as ‘the other.’ So what do [gay Pakistanis] do? They turn to pornography because they can’t live their lives openly.”

Shereen El Feki, author of the recent book Sex and the Citadel: Intimate Life in a Changing Arab World, says the discrepancy between perceptions around homosexuality and its apparent reality in Pakistan is consistent with her own findings in the Middle East, where, in recent years, the dialogue around sexual identity has been co-opted by fundamentalist clerics.

“Islamic conservatives, whether they’re actually in power or the governments in power are trying to placate them, they will tend to go to very narrow definitions of Islam,” she says. “One of the easiest ways to do this is to come down hard on the role of women, and particularly around sex and homosexuality.”

Long before the rise of Islamic conservatism, El Feki says, the Middle East and India had a literary tradition that celebrated gay love, but in recent years, that openness has been forgotten.

“You find in most civilizations in the Global South a much more open approach to homosexuality—irrespective of its status in religious and theological doctrine—than you find today,” she says. “So very often, any attempt to open a dialogue in the Arab region is branded as some ‘Western conspiracy’ to undermine traditional Arab and Muslim values. The reality is that long before the West was talking openly about homosexuality, Arabs in particular were writing about this very frankly. Our history has come to be rewritten by Islamic conservatives.”