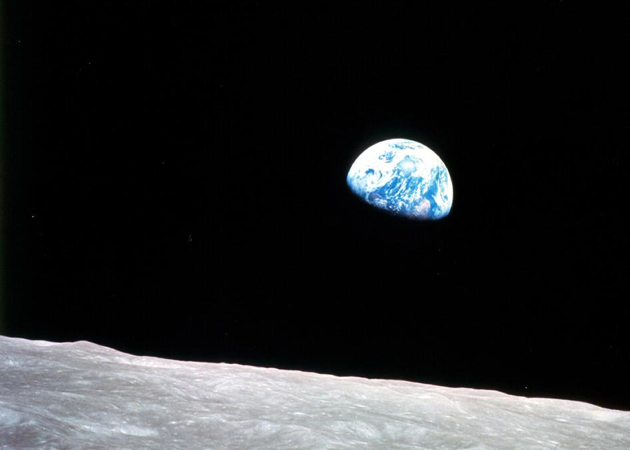 President Obama’s speech Tuesday on climate change is getting pretty high marks. Or as Al Gore put it, it was “the best address on climate by any president ever.”

At both the beginning and end of the speech the president invoked the historic “Earthrise” image, taken from the Apollo 8 mission on Christmas Eve of 1968 as the craft orbited the moon. That “blue marble” is the namesake of this blog itself, and was a great inspiration to the developing environmental movement in the 1970s.

At the close of the speech, the president put it like this:

…that image in the photograph, that bright blue ball rising over the moon’s surface, containing everything we hold dear—the laughter of children, a quiet sunset, all the hopes and dreams of posterity—that’s what’s at stake. That’s what we’re fighting for. And if we remember that, I’m absolutely sure we’ll succeed.

It looks like Obama here may be channeling the celebrated environmental writer (and longtime Mother Jones contributor) Bill McKibben, who similarly drew upon “Earthrise” to great effect at the opening to his 2010 book Eaarth. Only, McKibben goes considerably further—and arguably achieves a more impressive rhetorical effect—by noting that global warming has literally changed what Earth looks like from space. What this suggests is that the “Earthrise” picture wouldn’t be the same today as it was in 1968 (although to be sure, some of the differences might be hard to notice given the distance of the shot).

Consider the veins of cloud that streak and mottle the earth in that glorious snapshot from space. So far humans, by burning fossil fuel, have raised the temperature of the planet by nearly a degree Celsius…A NASA study in December 2008 found that warming on that scale was enough to trigger a 45 percent increase in thunder-heads above the ocean, breeding spectacular anvil-headed clouds that can rise five miles above the sea…

Or consider the white and frozen top of the planet. Arctic ice has been melting slowly for two decades as temperatures have climbed, but in the summer of 2007 that gradual thaw suddenly accelerated. By the time the long Arctic night finally descended in October, there was 22 percent less sea ice than had ever been observed before, and more than 40 percent less than the year that the Apollo capsule took its picture…Within a decade or two, a summertime spacecraft pointing its camera at the North Pole would see nothing but open ocean. There’d be ice left on Greenland—but much less ice.

Barack, Bill—you guys should talk. Between the two of you, you just might move us to save this rock.