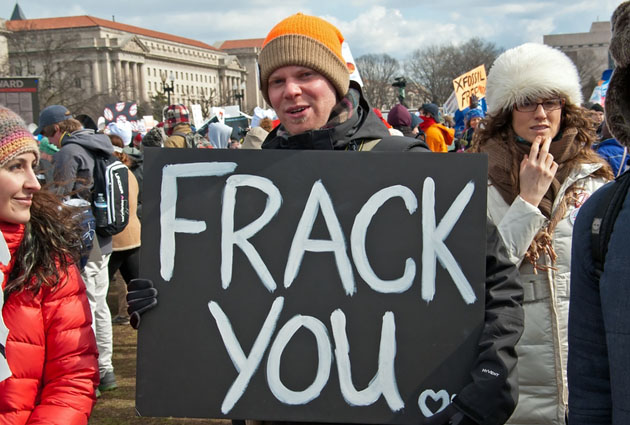 Monday afternoon Illinois governor Pat Quinn signed what the Associated Press touted as the “nation’s toughest fracking regulations,” creating a framework to manage hydraulic fracturing, in which chemicals are piped into rock at high pressure to release stored-up natural gas. But the new regulatory effort, which sharply divided the state’s environmental community and inspired fervor in the southern counties where drilling is most likely to take place, looks more like a tactical concession than an environmental victory.

The law, which was crafted through six months of stakeholder negotiations between the state, select environmental groups, and representatives from the oil and gas industry, includes stringent rules meant to increase public transparency, more closely monitor environmental impact, and provide avenues for recourse in case something goes wrong. But amid biting criticism from activists and advocacy groups that were excluded from the negotiations, environmental organizations involved in the process have argued that although they believe the law was a necessary foothold in the effort to control what seemed to be an inevitable boom in fracking in Illinois, this is by no means the end of the fight.

“It bothers me that the bill is being presented as a model for other states,” says Ann Alexander, a lawyer for the Natural Resources Defense Council who was part of the negotiations. “It represents a floor. Yes it’s strong; no, it’s not adequate.” What new law does provide is a baseline for measuring the actual impact of fracking and a mechanism for pushing back if something does go wrong, explains Jenny Cassel, a lawyer with the Environmental Law & Policy Center, another group that was involved in the negotiations.

Critics have attacked the law as regulatory window dressing. “These rules are arbitrary compromises based on negotiations with industry,” says Dr. Sandra Steingraber, a professor at Ithaca College and a vocal anti-fracking activist who led the charge against the bill. “They guarantee neither public health nor environmental integrity.”

Fracking was already legal in Illinois, although there was no fracking-specific regulation on the books, and industry interest has been growing, creating a sense that fracking was unavoidable. Illinois sits atop the New Albany shale play, an area projected to hold 3.79 trillion cubic feet of shale gas. Drilling leases have funneled hundreds of thousands of dollars into the coffers of counties and residents by way of fees and leases, and according to an AP investigation of state records, high-volume fracking had already begun. After it became clear the regulatory bill would become law, major drilling operations were started in Wayne County, some four and a half hours south of Chicago.

A full moratorium on fracking failed in the Illinois legislature last year, and representatives from the coalition of environmental groups that negotiated the new law have argued that compromise was better than nothing. But Steingraber believes that the lack of regulation wasn’t a reason to give ground. “The industry was waiting for the rules of the road before it came in,” she says. “This bill is a green light. It’s a starting gun.”