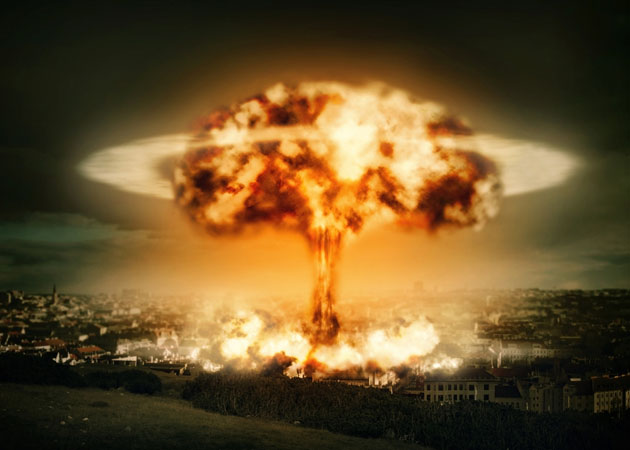 The news cycle can be a silly place. The Republicans in recent months have sucked up a lot of oxygen with a phony scandal (Benghazi) and a trumped-up scandal (the IRS’s improper targeting of tea party groups for scrutiny). The White House has been pinned down by some of this, while also contending with a very real and front-page debate over NSA surveillance prompted by leaks regarding two of its super-secret programs. Yet one matter that is perhaps more important than all of this and that is in the news for the moment registers much lower on the media Richter scale: trying to prevent humans from blowing up the one planet they have.

On Wednesday, President Barack Obama announced a new guidance for US nuclear weapons policies, and it’s a big deal. It follows Obama’s 2009 Prague speech, in which he declared the long-term goal of zeroing out nuclear weapons. According to a White House fact sheet, the new guidance “narrows U.S. nuclear strategy to focus on only those objectives and missions that are necessary for deterrence in the 21st century” and “directs DOD to strengthen non-nuclear capabilities and reduce the role of nuclear weapons in deterring non-nuclear attacks.” The fact sheet notes, “the guidance takes further steps toward reducing the role of nuclear weapons in our security strategy.” In non-wonk terms that means the US military will alter its planning that might entail the use of a nuclear weapon. And Obama’s new guidance declares that it would be reasonable to cut the level of strategic nuclear weapons by a third, beyond the lower levels Obama negotiated with the Russians for the New START treaty. Obama announced this proposed reduction in a Berlin speech.

All of this is receiving some news coverage today, but it won’t draw a smidgeon of the attention the assorted quasi-scandals do. Yet the effort to lower the possibility of a nuclear war is one of the most noble and significant endeavors for a president. (Addressing climate change ranks high, too.) Still, not since the early 1980s, when literally millions of Americans took to the street to protest President Ronald Reagan’s nuclear policies, has this been a hot political subject. It may be that the notion of a nuclear conflagration is too overwhelming to consider on a routine basis. Certainly, it’s more fun to fret about a stolen (or not stolen) Super Bowl ring.

Arms controllers did hail Obama’s actions. The Ploughshares Fund noted that the president “has finally replaced the nuclear guidance issued in 2002 by President George W. Bush with new policies that will reduce the roles, numbers and alert rates of nuclear weapons in US national security strategy.” (The United States currently maintains 7000 nuclear weapons in its arsenal.) And the Union of Concerned Scientists applauded Obama’s nuclear policy reform and urged him to go further, noting the United States “can maintain a robust deterrent with less than a 1,000 nuclear weapons—including strategic and tactical, deployed and stored—independent of Russia’s arsenal. Maintaining more weapons than needed undercuts U.S. security and wastes taxpayer dollars.” Hawks, inevitably, will denounce Obama’s attempt to reduce the United States’ warehouse of nukes and to decrease the significance of nuclear weapons in contingency planning. Yet it’s unlikely that a robust debate will erupt to equal the fuss over, say, Michelle Obama’s latest hair style. But for anyone who is serious about divining crucial national security differences between Obama and his predecessors, Obama’s new nuclear posture is significant and worthy of much notice.