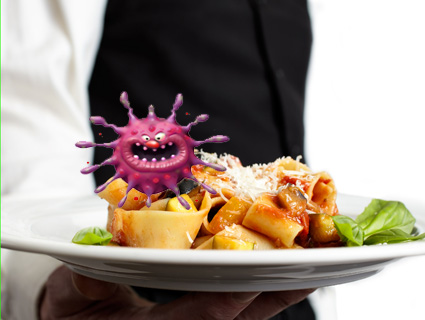 It’s old news that the United States fares quite poorly on the sick leave front: Unlike most developed countries, we have no federal law mandating paid days off for ill workers. Only four cities and one state have passed their own.

So unless you’re dining in San Francisco, Seattle, New York City, or Connecticut, your state’s waiters could very well give you whatever nasty bug they’re nursing while preparing and serving your grub because they don’t have the option to stay home without losing pay.*

To make matters even worse for restaurant workers and diners, a spate of “preemption bills”—which bar localities from makings laws requiring paid sick leave—has been surging through state legislatures with the help of the American Legislative Exchange Council and the National Restaurant Association, one of ALEC’s members. The first of these bills was passed in May 2011 in Wisconsin. Last week, Gov. Rick Scott signed Florida’s version into law, making it the eighth state to preemptively block paid sick leave for its workers (and the 13th to try) in just two years.

In many states, a number of chain restaurants and other establishments have come out in support of these bills, monetarily or otherwise. A few examples:

And likely many more that, like the establishments listed above, are members of the National Restaurant Association. The so-called “other NRA” has done its own fair share of spending on these bills, along with a number of its local affiliates.

Their efforts have been successful. Here’s how the sweep of preemption bills has played out nationwide: (Click on each state for more details.)

So how did this rapid spread come about? Known for writing model legislation and then shopping it around the country, ALEC set to work doing just that with Wisconsin’s preemption bill soon after it passed in 2011. At a meeting of the group’s Labor and Business Regulation subcommittee a few months later, attendees were given a copy (PDF) of the legislation, as well as a map of cities and states with paid sick leave mandates, prepared by the NRA.

The NRA got involved because it considers paid sick leave a threat to its industry, says Saru Jayaraman, codirector of Restaurant Opportunities Centers United: In 2011, the group spent hundreds of thousands of dollars to successfully shut down a sick leave measure in Denver. But as more cities have tried to enact rules guaranteeing paid sick leave, bills preempting that possibility state-wide, says Jayaraman, have become the NRA’s faster, cheaper alternative.

“I think they’ve come to the realization that it’s not a sustainable model to pour a million dollars into stopping this,” Jayaraman says. “So they found another way to do it. It’s undemocratic. It’s kind of like the Republican party deciding, ‘We’re not gonna get votes the normal way, so let’s not let people vote.'”

According to the Bureau of Labor Statistics, about 76 percent of restaurant workers don’t get paid sick days. By Jayaraman’s estimates and her organization’s surveys, it’s actually closer to 90 percent—about 9 million people nationwide.

Soon after the 2011 ALEC meeting, one preemption bill passed in Louisiana in 2012, and soon a few more were introduced. In the last six months, though, their momentum has surged: Since February, six more states have passed these laws, while five others have introduced them.

Presumably, the NRA is working to protect the interests of its members—which include numerous fast-food and chain restaurants. But it’s a misconception, notes Jayaraman, that these legislative efforts are necessary because industry gains are thin. “NRA companies, especially fast food, have great profit margins because of their high volume,” Jayaraman explains. “They’re doing well. Average profit margin is 4 to 5 percent.” Not to mention that studies have found paid sick leave policies either have no impact, or can even be good for business (PDF).

The NRA has kept quiet about its efforts to bolster preemption bills nationwide, Jayaraman says. “They haven’t been willing to own it or claim it. Which I think should be a comment as to how much even they know this is not the right thing to do.”

Correction: An earlier version of this post included Washington, DC, in the list of cities where sick restaurant workers are guaranteed paid time off. While DC does have a paid sick leave mandate, it excludes tipped workers.