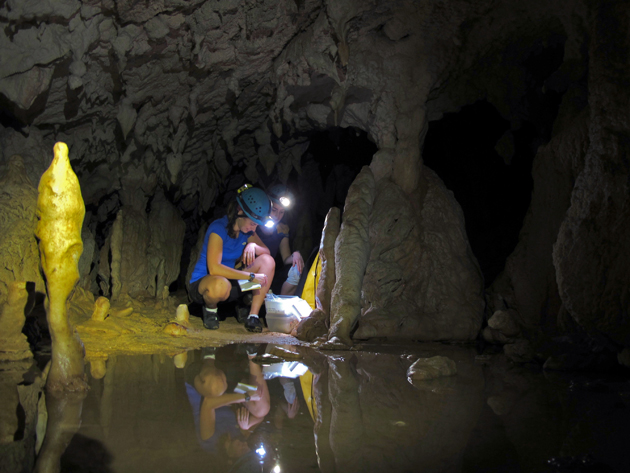 If you’ve ever visited a cave, you know the rules: Stay on the path, and keep your greasy paws off the formations. So Stacy Carolin was a bit taken aback the first time she headed into a cave not as a tourist, but as a scientist, and took a step off the beaten path. “I was a city girl back then,” she recalls. “It was very muddy and slippery…and also completely pitch black.” Not exactly the setting you’d expect for cutting-edge climate change research.

A few years later, Carolin, a Ph.D. student at Georgia Tech, is breaking ground in the field of paleoclimatology, the study of ancient climates, using an unconventional but increasingly prevalent tool: speleothems, a catch-all term for cave formations that includes stalagmites (remember the mnemonic: those that “mite” reach the ceiling from the floor) and stalactites (those that hold “tite” to the ceiling).

In a study released today in the journal Science, Carolin and her colleagues outline 100,000-year-old rainfall conditions in Borneo, mapped from chemical clues in cave formations there. Like most historic climate reconstructions, the goal is to compile real-life data against which to test predictive models; if scientists know how much rainfall there was in the tropics in the past, they can see how well their models are able to replicate those conditions, and tweak accordingly. But the most commonly-used “proxies” for ancient climates, including tree rings and ice cores, are notoriously inadequate in the tropics, leaving holes in scientists’ geographic picture of the past and making it difficult to measure historic changes in tropical weather systems, like monsoons, which can themselves have major impacts on global climate.

Deep inside caves in Mexico, Southeast Asia, China, and other limestone-rich locales worldwide, scientists have found rich troves of data in speleothems. Researchers look for formations that have already fallen over or broken off, so as not to damage the cave, haul these back to the lab, slice them open (“like a hot dog,” Carolin says), and study the ancient atoms within to discover how old they are and how much rainfall there was at different points in their past (speleothems form when rainwater drips through the limestone, picking up acid and minerals that pile up in the cave). 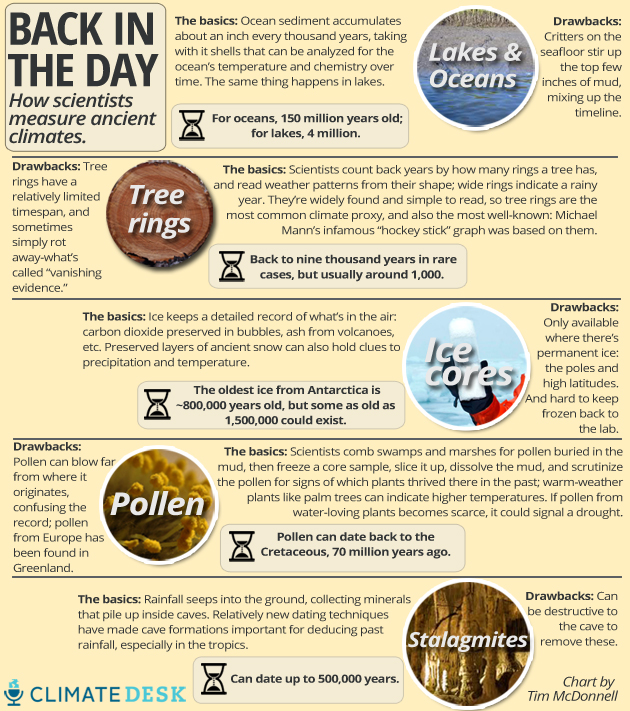 Stalagmites are “the next generation of climate records,” says Larry Edwards, an earth scientist at the University of Minnesota. He should know: Edwards pioneered the isotope dating technique that catalyzed a boom in speleothem studies over the last decade. Until recently, dating speleothems was, to put it mildly, a huge pain in the ass. Scientists needed to track down thorium and uranium isotopes that existed in absurdly small quantities, around 1 part per trillion, and their tools could only locate 1 out of 10 million of those…like finding a needle in a haystack in a cave on a different planet. In the late 1980s, Edwards began experimenting with different ways to use a mass spectrometer to improve the search, and today he’s able to find 1 isotope out of every 25, so that now, he says, “of all the climate records, [speleothems] are among the best dated.” 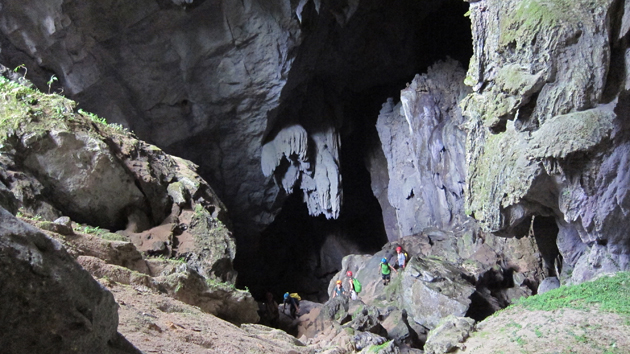 Carolin’s team ventures into a cave. Photo by Kim Cobb

Other benefits to stalagmites abound: They reach deep into history, up to 500,000 years in some cases, longer than most ice cores and far longer than tree rings. They’re widespread, appearing anywhere on earth where there’s a cave. And although tree rings offer a highly granular time scale, often showing changes on a year-to-year basis, stalagmites show a more detailed timeline than most other proxies, which is helpful for pinning what you observe in them to other known climate conditions at a given time.

Where in the past paleoclimatologists had been mostly limited to ice at high altitudes and the poles, trees in temperate zones, and lakes with ancient sediment, once reading speleothems became easier “all of a sudden the rest of the world was opened for climate records,” Edwards says.

On the flip side, collecting samples by definition means dismantling subterranean structures that have developed over hundreds of thousands of years and that in some cases are home to cave-dwelling critters or sites of cultural or economic significance to locals.

“You can’t pretend we’re not damaging the cave,” says Stephen Burns, a paleoclimatologist at the University of Massachusetts. Burns says field researchers try to collect only stalagmites that have already toppled (although to get more recent records it’s sometimes necessary to cut them down), and aim for areas that are away from where tourists visit.

Burns says that for the billions of people on earth who depend on monsoons for rainfall, stalagmites are the key to predicting what the future of climate change might hold. Now, he says, “the models don’t get the monsoons quite right. So understanding what changes monsoons is critical to understanding how they might change as the climate warms.”