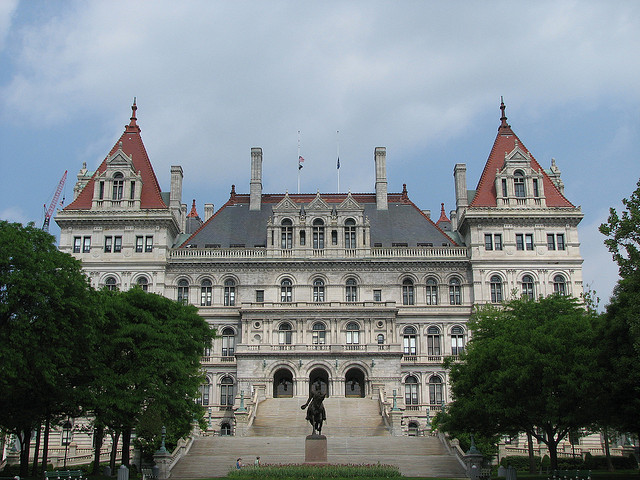 The deadline draws closer by the hour. In New York, the band of good-government reformers, labor unions, enviros, community organizers, religious leaders, and more have until Thursday night, when the current legislative session ends, to press state lawmakers to pass legislation combating political corruption and kickstarting a public financing program for statewide elections. Standing in their way: The odd coalition of breakaway Democrats and Republicans who control the state Senate and who are blocking the public financing bill, which passed the state Assembly earlier this year and is backed by Gov. Andrew Cuomo.

Friends of Democracy, the super-PAC run by political operatives Jonathan Soros and David Donnelly, is one of the most aggressive backers of public financing in New York State. Soros, the son of liberal financier and mega-donor George Soros, and Donnelly see New York as the front line in the post-Citizens United battle against big-money politics. In an interview on Tuesday, Donnelly had a cut-and-dry message for the independent Democrats, who broke away from the traditional Democratic caucus to form a new leadership coalition, and the Republican legislators who are denying a vote on public financing: Support reform, or we’ll fight to replace you.

“It’s pretty painfully clear that if this leadership structure, the [Independent Democratic Conference] and Republicans together, doesn’t produce on behalf of the citizens of the state a public financing law that addresses corruption, there needs to be a leadership structure that will do that,” Donnelly says. “That means electing people who will lead the Senate in a way that moves that legislation. It’s not so much of a threat as the reality of what we’re going to have to do.”

Donnelly declined to say which state senators Friends of Democracy would target. (Nor would he say how much Friends of Democracy has spent so far on New York’s public financing fight.) “I’m not about one senator or not about [independent Democratic senators] Diane Savino or Jeff Klein or any of these other Republican senators,” he says. “I’m agnostic about how we go about doing it. It’s a numbers game; we need to take out those numbers.”

Donnelly says he still holds out hope that the state Senate will pass a public financing bill before heading home for the summer. But if the state Senate fails, Friends of Democracy won’t walk away from the issue. In addition to targeting anti-reform senators, Donnelly explains, the super-PAC will continue pushing for a bill in the legislature, possibly during a special session or when lawmakers return later this year to work on a state budget. “If the senators can do it under the current leadership, great. Do it by Thursday, do it in a special session, during the budget session, great,” he says. “We’re not going away.”