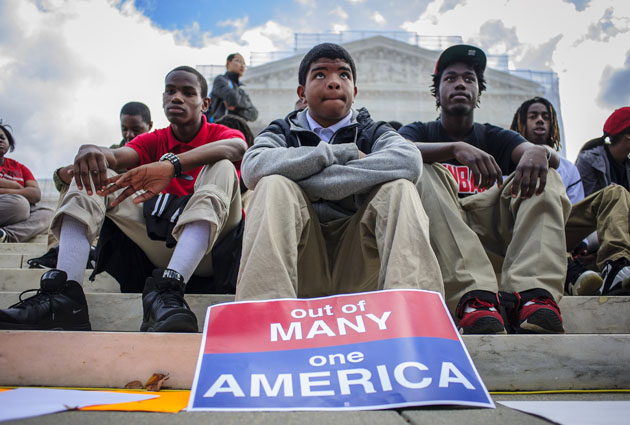 Given the chance to shoot down affirmative action, the Supreme Court, in a 7-1 decision, chose not to (PDF). But it did say that a lower court decision that had approved the University of Texas’ affirmative action program needed to be revisited, with the justices in the majority noting that this appeals court had not applied a stringent enough rule when reviewing the UT program. In short, the court said: Affirmative action is indeed permissible, but only in instances when the public benefit is narrowly defined and justified—and there is strict scrutiny of such factors.

The decision is mostly about how the lower court handled the case, which involved a white student whose application to the college was denied. (For more background on the case see here.) The majority noted, “The reviewing court must ultimately be satisfied that no workable race-neutral alternatives would produce the educational benefits of diversity.” And the appeals court, it ruled, did not:

Rather than perform this searching examination, the Fifth Circuit held petitioner could challenge only whether the University’s decision to use race as an admissions factor “was made in good faith.” It presumed that the school had acted in good faith and gave petitioner the burden of rebutting that presumption.

In the moments after the decision was released, legal experts disagreed on how much impact it could have on the use of affirmative action at both public and private universities and colleges (though the case only directly applied to public institutions). But just as important, the court bypassed the opportunity to reverse previous rulings and eviscerate affirmative action.

That means it was a bad day for Justice Clarence Thomas. As he notes in a concurring opinion (that reads like a dissent), he wanted the court to “hold that a State’s use of race in higher education admissions is categorically prohibited by the Equal Protection Clause.” Thomas’ decision was longer than that of the majority opinion written by Justice Anthony Kennedy. He compared the arguments in favor of affirmative action to those used to support segregation in years bygone, calling them “virtually identical” to the contentions the court rejected to undo segregation. He declared, “The use of race has little to do with the alleged educational benefits of diversity.” And he went as far as you would expect, noting that “Slaveholders argued that slavery was a ‘positive good’ that civilized blacks and elevated them in every dimension of life.” Yes, Thomas compared the justification of affirmative action to the justification for slavery. And he asserted that affirmative action harms white and Asian American students denied admission but actually causes more harm to those admitted under such programs: “Blacks and Hispanics admitted to the University as a result of racial discrimination are, on average, far less prepared than their white and Asian classmates.”

Thomas’ opinion was a cry of the heart against affirmative action—and a cry of frustration. Juxtaposed against such an extreme rant, the majority opinion looked rather moderate.