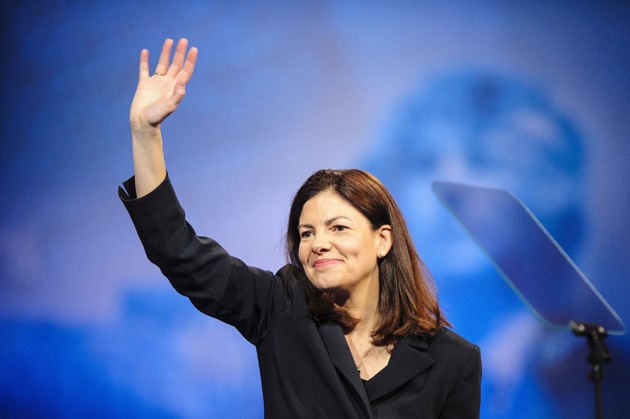 This story first appeared on the Center for Public Integrity website.

Freshman Sen. Kelly Ayotte found herself under serious political fire. The New Hampshire Republican’s vote in April against enhancing firearm background checks prompted withering ads from a gun control group. Then another. And another.

But shortly thereafter, a conservative nonprofit—funded in part by some of Ayotte’s own Senate colleagues, according to a Center for Public Integrity review of campaign finance filings—sprang into action on Ayotte’s behalf.

These six GOP leadership PACs combined to give a total of $105,000 to the American Future Fund in May, according to the Center’s analysis of Federal Election Commission filings. It is highly unusual for a group of leadership PACs to make sizeable contributions to politically active nonprofits, let alone during a matter of weeks, at a time when the beneficiary is airing ads in support of one of their own.

And the actual number of lawmakers whose leadership PACs gave money to the American Future Fund may be larger, as numerous political committees won’t file their first campaign finance reports of the year until July 31.

On May 10, the Iowa-based American Future Fund took to the airwaves touting Ayotte’s “courage and independence.” The initial advertising buy was reportedly in the range of $250,000, but within the next month, that figure would grow to more than $1.3 million, according to a press release from the group.

It is unusual for members of Congress’ PACs to make large gifts to a political nonprofit that’s airing ads in support of one of their own.

A spokesman for Ayotte did not respond to requests for comment, but in a fundraising email in May, the former attorney general-turned-senator was unapologetic for her vote. She vowed to not let a “smear campaign” by gun control groups pressure her into changing her vote. “I am 100 percent dedicated to fighting gun violence,” she wrote. “But I also have the experience to know that expanding an already broken background check system will not prevent a deranged individual or criminal from obtaining and misusing firearms.”

Matt Harakal, Hatch’s press secretary, declined to comment for this story. Representatives of the other senators mentioned did not respond to repeated queries from the Center for Public Integrity. Officials with the American Future Fund also did not respond to messages or emails.

The trend of GOP leadership PAC giving to the American Future Fund was first noted by the New York Times’ Derek Willis on Twitter.

Since it was created in 2008, the American Future Fund has become one of the top-spending politically active nonprofits. During the 2012 election cycle alone, the group spent at least $29 million on political advertisements, as the Center for Public Integrity previously reported.

Little is known about the group’s donors. In 2008, Iowa businessman Bruce Rastetter provided an unspecified amount of “seed money” for the organization. And between 2009 and 2011, records filed with the Internal Revenue Service indicate that another nonprofit, the Arizona-based Center to Protect Patient Rights, gave the American Future Fund more than $14 million—half of the $27 million it raised during the three-year period. The Center to Protect Patient Rights was founded by Republican operative Sean Noble, who has close ties to the political network of billionaire industrialist brothers David and Charles Koch.

Campaign finance reform organizations have long questioned whether the American Future Fund’s primary purpose is truly something other than influencing elections—a charge with the conservative nonprofit denies. Complaints have been filed in recent years with both the IRS and FEC, which have not, to date, issued rulings.

The Center for Public Integrity is a nonprofit, independent investigative news outlet.