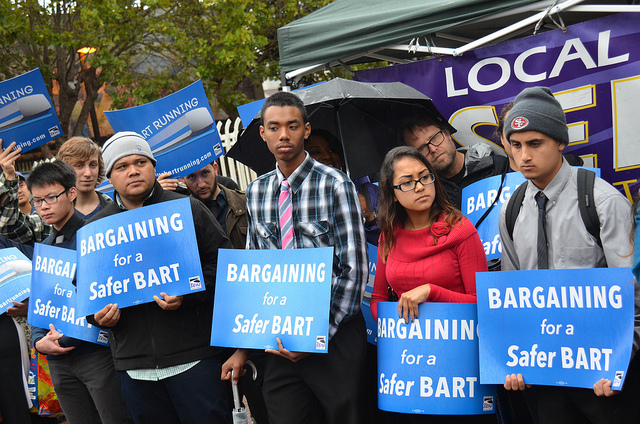 UPDATE 1, 10/18/13: After marathon negotiations following a sixty-day break, the two unions representing BART employees announced they would strike again at midnight Thursday night. Leading up to the strike, union negotiators and federal mediators had told reporters they were inching closer to an agreement on the major issues of pensions and health care costs, but couldn’t reach an accord. The unions suggested letting a neutral arbitrator have the final say on the remaining issue—rules determining when employees could collect overtime pay—but BART management refused, prompting a federal mediator to announce the end of negotiations. No word yet as to how long the trains will be out of service.

Here’s a closer look at what unionized workers from the nation’s fifth largest rail transit system are demanding and why you should care:

Workers for Bay Area Rapid Transit, more commonly known by its acronym BART. After contracts with the agency’s two largest unions, Service Employees International Union Local 1021 and the Amalgamated Transit Union Local 1555, expired and renewal talks broke down, the unions announced they would strike. This morning, instead of reporting for work, BART employees picketed the rail system’s stations. It’s BART’s first strike since a six-day protest in 1997.

What are the unions asking for?

Primarily, a wage increase, but also improved safety measures. Despite increases in the cost of living, BART employees haven’t received a raise in five years. At the last round of talks, the unions proposed a 23 percent raise over four years. BART countered, doubling their original offer with a proposed eight percent raise over four years. But as Bryce Covert of Think Progress notes, the unions say BART’s offer falls below cost of living increases. BART’s unions are also upset about a proposal for workers to pay more into their healthcare benefits.

That salary may be well above the annual earnings for someone making minimum wage, but, as The Nation points out, consider that a recent study by the Oakland-based Insight Center for Community Economic Development found that a family of four needed about $74,341 to get by in 2011—an increase of more than $12,000 three years prior.

Dr. Steven Pitts, a union expert at the UC Berkeley Center for Labor Research and Education, says that rising healthcare and retirement costs have affected everyone in the Bay Area, but BART is unusual in that it had a revenue surplus this year. Since BART employees endured wage stagnation during the recession, they expect more now.

“The unions have the capacity that says we helped you out in the past, and now we need you to pay us back,” Pitts said.

I’ve heard demands about safety. What’s that about?

In addition to a wage increase, the unions have demanded that BART add safety improvements, including bullet-proof glass in station booths and better lighting in tunnels. The well-publicized incident of a naked acrobat gallivanting in San Francisco’s Mission-16th Street Station and harassing a passenger was just one of many attacks in the recent past. Days before their contract ended, BART’s unions filed a lawsuit over BART directors’ refusal to bargain in good faith over worker safety. Union members pointed to more than 2,400 “serious crimes” at five stations in just the last three years, including more than 100 physical assaults on BART employees, and more than a 1,000 physical assaults on riders. The unions have also said that workers have risked their lives and been killed because of poor lighting in tunnels.

A video made by one of the unions points to some of the safety concerns workers and riders have had:

A BART spokesperson called the safety issues a “smoke screen,” arguing that contract negotiations are not the place to raise them.

“The unions have the capacity that says we helped you out in the past, and now we need you to pay us back.”

Who does the strike affect?

Though it’s less fabled than the New York subway and less known than the Washington Metro, according to the most recently available data, BART is the fifth most-used transit rail system anywhere in the United States. 44 stations, 104 miles of track, and more than 660 cars connect four of the Bay Area’s nine counties to San Francisco and vice versa, reaching some of the most distant suburbs and the region’s two largest airports. In fiscal year 2012, the system registered a weekday average of 366,565 riders, according to its own reports—an increase of more than 50,000 people in the last 10 years.

The jump in ridership highlights a widening disparity between where people work and where they live in the Bay Area. As the region has grown,  densely packed core cities like Berkeley, San Francisco, and Oakland have remained job centers while becoming prohibitively expensive for families, driving ever more people to inland suburbs. Recently released data from the US Census even named the Bay Area the nation’s top region for “mega-commuting,” or commutes which take an hour-and-a-half or more. Polling sponsored by the Metropolitan Transportation Commission, a state agency, has found that Bay Area residents value public transit and want to see it expanded. For workers looking to get to the densely packed downtowns closer to the Bay Area’s interior, BART is frequently the commute of choice.

The BART strike alone has been crippling to the Bay Area, but it’s not the only one. City of Oakland employees joined BART workers on the picket line Monday for a one-day protest. Union leaders rallied a crowd in front of city hall by saying they had made concessions during the recession and that they deserved better compensation now that the economy was improving.

AC Transit—a massive bus network which services cities east of San Francisco—had earlier threatened to strike as well once their contract expired on Sunday. Since AC Transit’s trans-Bay service shouldered much of the burden left by the BART strike Monday, the additional strike could have been disastrous. (The agency’s union, Amalgamated Transit Union Local 192, announced Monday morning they would continue negotiating instead.) Workers for the East Bay Regional Park District say they are planning to walk out over the Fourth of July weekend, and, as the San Francisco Chronicle reported yesterday, three unions representing University of California employees are also planning protests this week.

While each group of employees have their own gripes, Dr. Pitts says that this kind of high-level coordination between multiple unions is unusual, but having the government as a common employer has made it easier for unions to focus their energies.

Regardless of what either the unions or management wants, over the next few days, BART riders are going to be mostly concerned about how the strike will affect their daily commute. For more updates on that question, check www.isbartstriking.com.