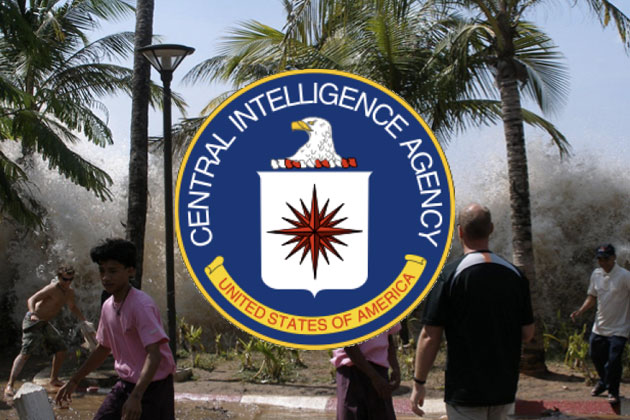 The Central Intelligence Agency is funding a scientific study that will investigate whether humans could use geoengineering to alter Earth’s environment and stop climate change. The National Academy of Sciences (NAS) will run the 21-month project, which is the first NAS geoengineering study financially supported by an intelligence agency. With the spooks’ money, scientists will study how humans might influence weather patterns, assess the potential dangers of messing with the climate, and investigate possible national security implications of geoengineering attempts.

The total cost of the project is $630,000, which NAS is splitting with the CIA, the National Oceanic and Atmospheric Administration, and NASA. The NAS website says that “the US intelligence community” is funding the project, and William Kearney, a spokesman for NAS, told Mother Jones that phrase refers to the CIA. Edward Price, a spokesman for the CIA, refused to confirm the agency’s role in the study, but said, “It’s natural that on a subject like climate change the Agency would work with scientists to better understand the phenomenon and its implications on national security.” The CIA reportedly closed its research center on climate change and national security last year, after GOP members of Congress argued that the CIA shouldn’t be looking at climate change.

The goal of the CIA-backed NAS study is to conduct a “technical evaluation of a limited number of proposed geoengineering techniques,” according to the NAS website. Scientists will attempt to determine which geoengineering techniques are feasible and try to evaluate the impacts and risks of each (including “national security concerns”). One proposed geoengineering method the study will look at is solar radiation management—a fancy term for pumping particles into the stratosphere to reflect incoming sunlight away from the planet. In theory, solar radiation management could lead to a global cooling trend that might reverse, or at least slow down, global warming. The study will also investigate proposals for removing carbon dioxide from the atmosphere.

The National Academies has held two previous workshops on geoengineering, but neither was funded by the intelligence community, says Edward Dunlea, the study director for the latest project. The CIA would not say why it had decided to fund the project at this time, but the US government’s apparent interest in altering the climate isn’t new. The first big use of weather modification as a military tactic came during the Vietnam War, when the Air Force engaged in a cloud seeding program to try to create rainfall and turn the Ho Chi Minh Trail into muck, and thereby gain tactical advantage. Between 1962 and 1983, other would-be weather engineers tried to change the behavior of hurricanes using silver iodide. That effort, dubbed Project Stormfury, was spearheaded by the Navy and the Commerce Department. China’s “Weather Modification Office” also controversially seeded clouds in advance of the 2008 Beijing Olympics, hoping to ensure rain would fall in the Beijing suburbs instead of over the Olympic stadiums.

Although previous efforts to manipulate weather and climate have often been met with mockery, many geoengineering proposals “are fundamentally doable, relatively cheap, and do appear to be able to reduce climate risk significantly, but with risks,” explains David Keith, a Harvard researcher and top geoengineering proponent.

But if geoengineering is cheap and “fundamentally doable,” as Keith claims, that suggests foreign countries, or even wealthy individuals, could mess with the climate to advance their own ends. “This whole issue of lone actors: Do we need to be concerned about China acting unilaterally? Is that just idle chatter, or is that something the US government should prepare for?” asks Ken Caldeira, a geoengineering researcher at the Carnegie Institution’s Department of Global Ecology and a member of the current National Academy of Sciences panel.

At least one individual has already tried modifying the climate. Russ George, the former head of Planktos, a company that works to develop technology to deal with global warming, seeded the Pacific Ocean off western Canada with iron to generate a plankton bloom that, in turn, was supposed to suck up carbon dioxide from the air. George’s effort was widely condemned, but at present there’s little to stop other individuals or countries from trying it or something similar. That’s part of what has the US intelligence community interested.

The CIA’s decision to fund scientific work on geoengineering will no doubt excite conspiracy theorists. The last time the government tried to do cutting-edge research related to the atmosphere—with the High Frequency Active Auroral Research Program (HAARP), which aimed to protect satellites from nuclear blasts—people speculated that it might be a death ray, a mind control weapon, or, worst of all…a way to control the weather.