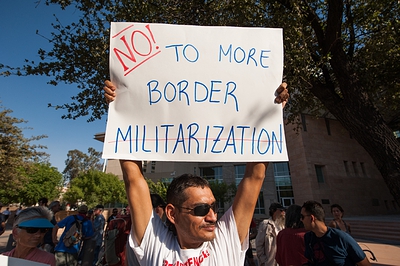 As the immigration reform battle moves to the House of Representatives, a Republican super-PAC backing comprehensive reform is gearing up for a bruiser of a fight.

In an interview, Charlie Spies, who co-founded the Republicans for Immigration Reform super-PAC with former Secretary of Commerce Carlos Gutierrez, said his group is focused on two sets of House Republicans: those who are on the fence about reform, and those who support a comprehensive immigration reform bill like the one passed by 68 senators—including 14 Republicans—last week. Republicans for Immigration Reform, Spies says, plans to target constituents who support reform in select Congressional districts and channel that support into the offices of their member of Congress. The point is to amplify grassroots support for comprehensive reform, giving cover to lawmakers who support reform and nudging those on the fence to get onboard with a comprehensive bill.

At the same time Gutierrez will continue a media blitz that’s seen him on most major TV networks and quoted in national newspapers chiding his fellow Republicans for not embracing reform. “We’ll be very actively engaged both from sort of a top-down and bottom-up approach of showing support for reform to Republican members,” Spies says.

It’s a strategy, he adds, taken from the playbook of the activists on the other side of the debate. Throughout the immigration reform fight, hardline anti-immigration groups have consistently picked out reform opponents and urged them to call and email their lawmakers to reject a comprehensive immigration bill.

On the fundraising side of things, Spies says Republicans for Immigration Reform has so far generated plenty of excitement—but little so far in the way of big checks. Many donors are still burned out from the 2012 election cycle. Or they’re waiting for the 2014 cycle to begin in earnest before they starting cutting checks again. “People are holding off,” Spies says. “They’re saying ‘we’ll send in money later this year.’ And so in terms of getting checks in the door, it’s been slow. In terms of level of enthusiasm, it’s been strong.”

As the New York Times reports, a number of big-money players are plunging into the immigration fray to help get a bill passed. Those groups include the American Action Network, a dark-money nonprofit based in Washington; Americans for a Conservative Direction, another nonprofit run by GOP fundraiser extraordinaire Haley Barbour with ties to Mark Zuckerberg and Joe Green’s FWD.us group; and the Koch-backed Americans for Prosperity Foundation. Here’s more from the Times:

But many of the most powerful and well-financed forces in the party are moving to provide cover for the Florida senator and Republicans like him who are pushing to overhaul the nation’s immigration system.

Their message: if we ever want to take back the White House, we have to stop devouring our own.

As the party assesses its chances for the 2016 presidential campaign, many Republican strategists believe that they need as robust a primary field as possible, with more than just one or two viable potential contenders.

A messy fight over a subject as touchy as illegal immigration is a prospect many Republican leaders are eager to avoid, especially since three of their best hopes for 2016 are closely tied to the debate: Mr. Rubio, former Gov. Jeb Bush of Florida, and Representative Paul D. Ryan of Wisconsin, who is expected to play a vital role once the House starts debating the issue next week.

All these efforts lead up to a critical meeting on July 10. That’s when, in the basement of the Capitol, House Republicans will meet to begin deciding what to do with the comprehensive bill passed by the Senate. The super-PACs and nonprofits wading into the fray are betting that their ads and lobbying will embolden pro-reform Republicans for what’s sure to be a bitter fight ahead.