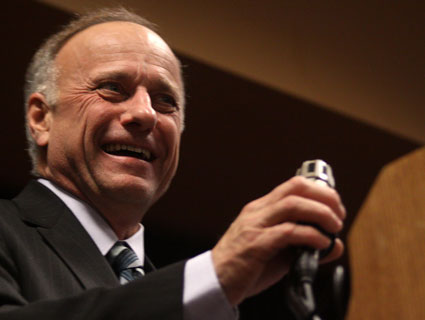 Ever since Rep. Tom Tancredo (R-Colo.) departed the House in 2008, Rep. Steve King (R-Iowa) has been the lower chamber’s most visible critic of immigration reform. For the past three months, he has taken on the role of ringleader of the House’s anti-immigration caucus, hosting regular meetings in his office to discuss with his tea party-minded colleagues how to scuttle efforts to pass legislation that would offer legal status to any of the country’s 11 million undocumented immigrants.

On Wednesday, as House Republicans huddled on Capitol Hill to discuss a way forward for immigration reform, King told reporters outside the closed-door meeting that he didn’t even want to see a bill giving President Obama more resources to beef up border security, suggesting that he couldn’t be trusted. “It’s like having a teenager that wants the keys to the car after he’s already wrecked the other one,” King told reporters outside the meeting. “Maybe handing him a new credit card and saying, ‘Yeah, I know you promised you’ll mow the lawn and carry out the garbage, here are the keys to the car.’ You have to do it the other way. Say, ‘Mow the lawn, do your chores, and then come back and talk to me and we’ll discuss whether you get the keys to the car.'”

Comparing the president of the United States to a petulant adolescent who should “mow the lawn” is a fairly routine, if condescending, statement from the bombthrowing Iowa Republican. It hardly scratches the surface when it comes to King’s anti-immigration bombast. Here’s a small taste of some of the most outrageous, outlandish, or just plain weird things he’s said and done on the topic of immigration:

Built a model of an electrified border wall: In 2006, prior to the failure of President Bush’s immigration reform efforts, King brought a prop representing a southern border wall to the House floor to propose an alternative to amnesty for undocumented immigrants. He explained how cranes could be used to drop a series of concrete walls into a trench dug out of the desert floor, which he claimed would cost $1.3 million for each mile. To keep would-be border hoppers from scaling the wall, King proposed adding barbed wire to it. “We could also electrify this wire with the kind of current that wouldn’t kill somebody, but it would simply be a discouragement for them to be fooling around with it,” he said, sticking spiraled wires into the top of his prop for dramatic effect. “We do that with livestock all the time.”

Discussed a cockroach-proof border wall: During a 2010 tea party rally in Arizona, King appeared alongside Tancredo to defend the state’s draconian immigration law, which the Supreme Court struck down in large part last year. Standing behind a sign reading “Political correctness = intellectual fascism,” King harkened back to his 2006 House speech, touting how economical his border wall proposal would be—although the price tag had since increased. “I told this to Karl Rove one day, we were having this discussion,” King said. “I said, Karl, if you give me $6 million a mile, there will not be a cockroach [that will] get across my mile. I guarantee it!”

Proposed making amnesty contingent upon deporting liberals: During the same appearance with Tancredo, King described a “circumstance by which I would support an amnesty plan” in a drop-the-mic moment: “For every time we give amnesty to an illegal immigrant, we would just deport a liberal.”

Compared illegal immigration to terrorism, the Holocaust: The Anti-Defamation League has tracked the “extremist rhetoric” that King has directed at immigrants over the years. Notable quotes include references to illegal immigration as a “slow-rolling, slow-motion terrorist attack on the United States” and also a “slow-motion Holocaust.” King has also claimed (falsely) that more than a quarter of the country’s major violent crimes are committed by undocumented immigrants.

Accused immigrants of “victimology”: Running for reelection in 2012, King held a town hall meeting where he warned his audience about the dangers of multiculturalism. King described how he discovered during an internet investigation that there were 59 student groups at Iowa State University alone promoting the concept: “It started with Asians and it ended with Zeitgeist. So from A to Z. And most of them were victims groups, victimology, people that feel sorry for themselves. And they’re out there recruiting our young people to be part of the group that feels sorry for themselves.”

Compared immigrants to dogs: At an Iowa town hall meeting last year, King compared immigrants to hunting dogs. “You want a good bird dog? You want one that’s going to be aggressive? Pick the one that’s the friskiest…not the one that’s over there sleeping in the corner,” he advised. “You get the pick of the litter and you got yourself a pretty good bird dog. Well, we’ve got the pick of every donor civilization on the planet. We’ve got the vigor from the planet to come to America.” King later clarified his comments, sort of, by explaining that they were a “compliment” taken out of context by “professional hyperventilators.”

Visited the Great Wall of China for inspiration: During an appearance on the radio show of conservative activist Phyllis Schlafly in March, King mocked naysayers who thought that building a 2,000-mile fence on the southern border “would be too much of an engineering marvel” when China built one more than two-and-a-half-times that long. “We can do the Panama Canal 100 years-plus ago, and I’ve been over there to take a look at the Great Wall of China that was built more than 2,000 years ago, and that’s 5,500 miles long and you can march armies down the top of it, the Japanese did that,” King said. “So building a fence is not that hard. I’ll just show you how to do it if it’s too complicated for our public policy people to get their mind around.” Without a proper fence, King added, the United States risked “giv[ing] up the rule of law” and becoming a Third World nation where citizens are forced to build walls with “broken glass” around their properties, which have “a safe room that they can go into to wait for people to rob them.”

Reported “brazen illegal aliens” invading his office: Last month, King announced on Twitter that “20 brazen self professed illegal aliens have just invaded my DC office” as part of a Capitol Hill protest the week after the House passed King’s amendment to strip funding from a program for undocumented minors and threaten them with deportation. “Obama’s lawless order gives them de facto immunity from U.S. law,” his tweet concluded.