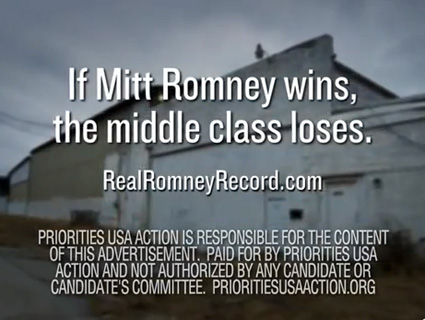 Ask the average American about super-PACs and I’d venture to guess he or she thinks of: those incessant negative political ads during the evening news, something about the Obama-Romney race, or the sheer amount of spending ($7 billion!) during the last election season. (That is, if they even know what a super-PAC is.) For the broadcasting business, though, super-PACs have come to stand for something altogether different: a big, fat payday.

The title of this post refers to something Les Moonves, the CEO of CBS Corporation, said at an entertainment law conference last year. Moonves was understandably over the moon about the rise of super-PACs: In 2012, he explained, the network’s profits were expected to soar by $180 million thanks to political ads.

And it’s not just CBS that’s riding high thanks to political ad spending. TV stations in battleground states are magnets for ad spending, and they’re driving a new wave of consolidation in the broadcast industry, leaving a handful of big media companies well-positioned to reap hundreds of millions during the 2014 midterm elections and, especially, the 2016 presidential race. Just in the past month, the Gannett company bought 20 TV stations for $1.5 billion, and the Tribune Company inked a $2.7 billion deal for 19 stations. Those deals included stations in battleground states.

Washington, DC’s WJLA, owned by the Allbritton media company, the New York Times notes, which serves both the DC and the northern Virginia markets, banked $33 million in ad spending on campaigns and issues last year. Columbus’ WBNS, owned by the Dispatch Broadcast Group, booked $20 million in campaign ad spending out of $50 million in total ad buys. Ad spending was also up at TV stations in Wisconsin and Colorado. Wherever there was a political fight, campaigns and consultants were gobbling up ads. According to the Times, WJLA could by bring in $300 million if the Allbritton media company decided to sell it (which, earlier this year, Allbritton said it planned to do).

So all this political ad spending is making the owners of these stations mighty happy. But someone’s getting the shaft, right? Yep: local viewers and businesses. From the Times:

Analysts say the surge in station consolidation this year has also been driven by low interest rates and by an enormous rise in retransmission fees for stations, which are the equivalent of per-subscriber fees for cable channels like ESPN and MTV. Some stations now earn 40 to 50 cents a month from each cable and satellite subscriber.

But those fees currently account for about 10 percent of station revenue, and even if they double in the next five years, as the research firm SNL Kagan predicts, advertising revenue will remain the most important part of the station business. Thus, political advertising is a lifeline, even if the sheer volume of ads sometimes makes viewers want to hurl the remotes at their sets.

“We get complaints from viewers,” Michael J. Fiorile, the chief executive of WBNS’s owner, the Dispatch Broadcast Group, acknowledged. “The bigger complaints are from regular advertisers who really get pushed off the air.”

“Don’t get me wrong,” he added with a chuckle. “It’s a good problem for us to have.”

There are a number of worries with the escalation of the TV political ad wars and the broadcast industry’s consolidation. For starters, it’s far less likely that TV stations will fact-check super-PAC ads, let alone yank misleading ads off the air, which political analyst Kathleen Hall Jamieson is trying to do with her FlackCheck.org project. (By law, TV stations can’t censor candidates’ ads, but they can vet and reject those of outside groups.) After all, super-PACs and dark-money nonprofits are a cash cow for broadcasters. Why bite the hand that feeds? When the public interest group Free Press analyzed political ads and newscast stories in six TV markets in battleground states, it found “a near-complete station blackout on local reporting about the political ads they aired.”