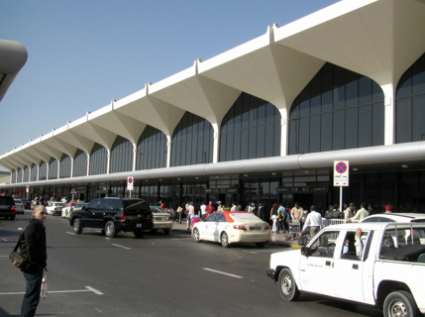 A New York woman who valeted her car at Greater Rochester International Airport recently returned to find a notice on her car informing her that it had been searched without her consent. Furious, she got in touch with a local TV station, and the story went viral. TSA quickly put out a statement saying that its agents don’t search cars—but searches can be included in a TSA-approved security plan. Mother Jones has found that not only does TSA approve searches of the trunks and interior of unattended cars in an undefined perimeter that’s considered dangerously close to the airport—like a car left with valet parking—but if a valet attendant finds illegal drugs instead of bombs, they will call the police. Privacy experts say these searches could be a violation of a person’s Fourth Amendment rights.

“We search every car, we open the trunk and take a look around,” says Saour Merwan, a keymaster at the valet service at San Diego International Airport. “We were told by airport authority to do that, since about two years ago. [We] keep an eye out for something suspicious, like wires and cables. The airport has security regulations and we have to follow them.” Merwan says the service doesn’t inform anyone that they’re checking out the inside of the vehicles, and when asked what he’d do if he found illegal drugs, he says, “Of course we’d call the police.”

“This is exactly what the Fourth Amendment was designed to say the government can’t do, generally search everything without suspicion,” says Fred H. Cate, a professor at the Maurer School of Law at Indiana University. “At the same time, the Supreme Court has made an exception to searching items that you’ve voluntarily given to someone else—like a car. It’s a crazy argument, but that’s not bothered the courts before.”

As David Castelveter, a spokesman for TSA explains, each airport in the United States is required to come up with a TSA-approved plan to deal with security risks. That includes “unattended vehicles parked curbside at the terminal.” Approved measures to deal with that risk can include “searches of cars queued for curbside valet parking.” (Not all airports have valet services, but those that do tend to leave the cars in lots close to the airport.) Mother Jones asked Castelveter whether the definition of “curbside” can include any parking lot close to the airport—including those that may contain locked, non-valet cars—but he said TSA looks at each airport security plan on a “case-by-case basis.” Obviously, valet cars are easier to search than other vehicles, as the valet company has the keys.

“If TSA is made aware that evidence of illegal activity is discovered incidental to a search for explosives, that information will be relayed to law enforcement,” Castelveter adds.

The airports Mother Jones contacted didn’t all handle valet car searches the same way. At the Minneapolis-St. Paul International Airport, valet parking is underneath the terminal, so a security guard does a quick trunk search when the drivers are in the car. The same thing happens at Nashville International and at Logan Airport in Boston. As Richard Walsh, a spokesman for Massachusetts Port Authority explains, “If a driver does not wish to participate in this procedure, he/she will be directed to park in the central garage.” An attendant for the valet at San Francisco International Airport said “yes, we can search” before changing his mind and adding “we just check the outside of the car. We just take down license plates. I’m not allowed to give you an answer.” At Los Angeles International Airport, the valet attendants open the trunk to search for valuables that might be stolen while the person is gone, and list them on a piece of paper, but don’t “look for specific stuff” related to security, according to an attendant.

The problem, from a privacy perspective, occurs when cars are searched without the driver’s consent. “If you pop your trunk, you’ve consented to the government looking into your car, and you’ve waived your Fourth Amendment right,” says Ben Wizner, the director of ACLU’s speech, privacy & technology project. “But no court has ever indicated that TSA can conduct unwarranted searches, without suspicion, for anything other than explosives at the checkpoints where people are actually getting on the plane…this raises serious constitutional questions.”

Castelveter says the searches do not violate the Fourth Amendment, because they fall under TSA’s authority to search for explosives. He also says that a sign is placed at each valet booth alerting drivers of the search (the Rochester woman claims a sign wasn’t there.) Karl Manheim, a professor at the Loyola Law School in Los Angeles, says the presence of a sign would make this an easier case for TSA to win, as “It could be said that the valet customer consents to the search by leaving the car at curbside with notice that it may be subject to search.” But Wizner argues that the presence of a sign doesn’t make it any more constitutional.

“Why not just put a sign on the street saying any time you leave your car, the government can search it?” he says. “This is just more TSA mission creep, first it’s keeping weapons off planes, then keeping a safe perimeter around airports, and then all of a sudden, you have justification for searching cars in front of any building, anywhere.”